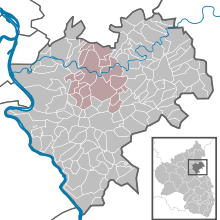 Location of the community in the Rhein-Lahn district

The Verbandsgemeinde Nassau was established in 1972 as part of an administrative reform in the state of Rhineland-Palatinate.

On January 1, 2019, it merged with the Bad Ems community to form the new Bad Ems-Nassau community .

The development of the number of inhabitants in relation to the area of ​​the Verbandsgemeinde Nassau at the time of the dissolution; the values ​​from 1871 to 1987 are based on censuses:

The Nassau municipal council consisted of 28 honorary council members who were elected in a personalized proportional representation in the local elections on May 25, 2014 , and the full-time mayor as chairman. The last mayor was Udo Rau (CDU).

Blazon : "Divided by blue and gold, above a growing red-armored and tongued golden lion, sprinkled with golden shingles, below 19 blue diamonds, 7: 7: 5 placed."