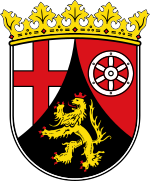 The municipal elections in Rhineland-Palatinate 2014 took place on May 25, 2014 . There are city and municipal councils , municipality councils and district councils as well as in the District Association Palatinate elected to the county council. In cities and municipalities in which local districts are formed, the local councils and mayors were also elected. In cities and municipalities belonging to the association, the city or local mayors were directly elected at the same time , with the runoff elections that may be required being scheduled for June 8th. The European Parliament election was held on the same day . At the same time, local elections were held in Baden-Württemberg , Brandenburg , Hamburg, North Rhine-Westphalia , Mecklenburg-Western Pomerania , Saarland , Saxony , Saxony-Anhalt and Thuringia . The turnout had remained stable at 55.5% compared to 55.1% in the 2009 local elections in Rhineland-Palatinate .

Citizens of a member state of the European Union were entitled to vote in the municipal representative bodies (local advisory council, municipal / city council, association council, district council) as well as in the elections of the mayors and district administrators . The prerequisites for this were that they had reached the age of 18 on the day of the election, that their main residence had been in the electoral area for at least three months before the election and that the person was not excluded from voting in the Federal Republic of Germany. A total of 3,232,565 people were eligible to vote in the local elections in Rhineland-Palatinate.

The eligibility was when the above conditions fulfilled person in the Federal Republic of Germany was not not disqualified from voting or eligibility and in their country of origin from eligibility. A total of 78,020 people ran for the local elections.

A coalition of the SPD and the Greens ruled in the state parliament of Rhineland-Palatinate since 2011, the CDU was only about 8,000 votes behind the SPD. Other parties failed at the five percent hurdle .

In the local elections in Rhineland-Palatinate, those entitled to vote for each representative body, i. H. for each local council, district council, etc., as many votes as there are seats in the respective representative body. For the city councils in the two largest cities in the state, Mainz and Ludwigshafen am Rhein , this is 60 seats and therefore 60 votes. These voices may be cumulated and variegated . Cumulation means that each person can be given up to three votes in a nomination. Spreading means that people on different nominations can get votes from the same voter. There is also the option of submitting a list cross. With a list cross, the persons listed on the respective list are assigned the votes that may still remain after accumulating and variegating in the order of their naming. A person named twice or three times first receives two or three votes before the person named below receives the first vote. People could also be crossed out on the ballot paper, they would then not receive a vote if the list cross was set.

Parties and electoral associations that have not been represented in the state parliament or in the respective representative body with their own nomination without interruption since their last election must collect support signatures from eligible voters from the respective area. This is up to 250 signatures for a nomination. No signatures need to be collected for communities with less than 500 inhabitants. Parties and electoral associations that are represented in a district council do not have to collect signatures for nominations for the municipal councils and councils of the same district.

In addition to the honorary local mayors and mayors, a few other, partly full-time, heads will be elected. These are:

The mayor elections are partly necessary due to the ongoing regional reform . On July 1st, several reorganization laws come into effect, through which various association communities are dissolved, enlarged or newly formed. The city of Bad Kreuznach (enlargement) as well as the district of Cochem-Zell and the Rhein-Hunsrück district (change in the membership of three communities) are also affected.

The three parties represented in the state parliament, CDU , SPD and Greens as well as Die Linke , each recorded slight gains compared to 2009; for the Greens and the Left, the result was a historic record. The FDP, on the other hand, lost more than half of its share of the vote. The alternative for Germany , which was introduced for the first time, recorded the greatest gain . The Pirate Party also appeared for the first time in several cities and districts as well as in a community association and achieved 0.4% of the votes nationwide. Of the other parties, the Republicans suffered the biggest loss, falling from 0.9 to 0.2%. The NPD and ÖDP also hardly played a role with 0.2% each.

Changes to the electoral law

The parliament decided the Sixteenth Law amending the municipal Act (KWG) on May 8, 2013, on this basis, the Interior Ministry issued a new municipal order (KWO). These included these major changes:

Criticism of the election law

The above-mentioned changes to the electoral law were criticized at an early stage and complaints were submitted to the constitutional court of the state of Rhineland-Palatinate. It was criticized by a single plaintiff that the information on the gender proportions discriminated against male candidates. The complaint by the Pirate Party of Rhineland-Palatinate criticizes the fact that the redesign of the ballot papers on this very election campaign would lead to an unconstitutional influence on those entitled to vote. In addition, with the restriction of the recording of male and female gender characteristics, intersexual and transident people would be discriminated against and would have to be classified into the traditional gender system. Furthermore, the PIRATES criticize that people would be deterred by the forced gender information in the official forms from participating in assembly meetings and thus in the democratic decision-making process. The constitutional lawyer Hans-Werner Laubinger also described the new local electoral law as unconstitutional.

In the statement of the state government on the constitutional complaint of the Pirate Party and three other people it was even expressly pointed out that the state is striving to influence the election. However, this was justified by the mandate of the state constitution in Article 17, Paragraph 3, Clause 2:

“The requirement to strive for gender parity in local elections is a result of the constitutional mandate to promote real equality between women and men. […] Section 15 (4) KWG now transfers it [the constitutional mandate] to parties and groups of voters […]. The aim is for the state to exert influence on the process of listing applicants in local elections. (P. 16) "

The state government also justifies the restriction of the basic right to informational self-determination of transident persons in the form of the publication of the gender assignment on the ballot paper by a predominance of the general interest:

"The provision [...], according to which the gender of the applicants must also be indicated on the voting slip, does not violate complainant 4 in the basic right to informational self-determination from Article 4a LV. […] According to Article 4a, Paragraph 2, the fundamental right can be restricted by statute or on the basis of a statute, insofar as overriding interests of the general public so require. (P. 25) "

"Subject to a final examination in the main proceedings - there are substantial reasons why the provisions are unconstitutional because they violate the principle of freedom of choice."

Further motions, such as the legal request to the parties and groups of voters to aim for gender parity when drawing up the election proposals, were rejected. This fact led to the criticized gender information being published in the official election announcements . For example, in the Mainz Official Gazette (p. 37) in the election proposal of the Pirate Party, two intersex / transgender people were assigned the gender “male” by the election officer. These two were also removed from the table with the numerical information on the list, which is why a total of 15 people is given in the table, although 17 people are subsequently named. According to the Mainzer edition of the Allgemeine Zeitung of April 30, 2014, the Pirate Party demanded an immediate correction.

On June 13, 2014, the Constitutional Court of Rhineland-Palatinate announced its verdict on the main matter of the constitutional complaint against the changes to the Local Election Act.

“As a justification, the Constitutional Court essentially stated that the above-mentioned provisions on the design of voting papers were unconstitutional because they violated the principle of freedom of choice. Even after a further referral, he adhered to the constitutional standards already set out in the express decision and of the opinion that in the specifications for the design of the ballot paper an inadmissible state influence on the content of the voting decision at the time of voting and thus an inadmissible restriction of the principle of Freedom of choice lies. "

Accordingly, the imprints on the ballot papers for local elections in Rhineland-Palatinate, decided by the red-green coalition majority in the state parliament, have been declared by the constitutional court to be incompatible with the principles of freedom of choice. This also confirmed the decision in the interim injunction of April 4, 2014, which already prohibited the relevant imprints in the local elections on May 25, 2014.

On October 31, 2014, the Constitutional Court announced that there would be an oral hearing on December 15, 2014 with regard to the parity-related information in the minutes of the nominations.