The title of this article is ambiguous. For the German baron and general field witness, see Franz Fortunat von Isselbach . 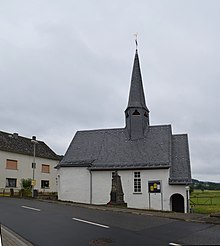 Isselbach is a municipality in the Rhein-Lahn district in Rhineland-Palatinate . It belongs to the community of Diez .

The late Gothic - early Baroque style chapel was probably built around 1500. One of the bells came from the same time. This was melted down for weapons production during the First World War .

To the north-east of today's Isselbach was Oberisselbach , which fell desolately as a result of destruction in the Thirty Years' War and there is evidence that it still existed around 1573. Today's Isselbach goes back to the former village of Unterisselbach .

In 1643 Isselbach came under the control of Esten (today Holzappel ) through a purchase by Count Peter Melander von Holzappel , which in 1656 became the County of Holzappel-Schaumburg . Through this change of rule, the population of Isselbach became Protestant . Temporarily occupied by the French in 1795, from 1806 the place was part of the Duchy of Nassau , which was annexed by Prussia in 1866 . Since 1946 the place has been part of the state of Rhineland-Palatinate .

Evidently since 1718 there was a school in Isselbach. In 1824 a new school building was built in the Nassau classical style, which was taught until 1969. The localities of Giershausen and Ruppenrod also belonged to the catchment area of ​​this so-called “New Elementary School ” . The building is now a listed building. Isselbach has been part of the catchment area of ​​the Esterauschule primary and secondary school in Holzappel since 1969.

Isselbach is assigned to the Roman Catholic parish St. Bonifatius in Holzappel and belongs with it to the pastoral area of Diez , which in turn is incorporated into the Limburg district in the Limburg diocese .

On the Protestant side of the place is the parish Eppenrod in the Dean's Office Nassau region in the provost Rheinhessen-Nassau region of the Evangelical Church in Hessen and Nassau belong (EKHN).

The municipal council in Isselbach consists of eight council members, who were elected by a majority vote in the local elections on May 26, 2019 , and the honorary local mayor as chairman.

The municipal coat of arms was officially introduced in 1973 and goes back to the family coat of arms of the noble von Usselbach family. The first proven seal of Isselbach comes from 1816, the blazon reads: "In gold a blue brook, in it three silver fish swimming to the left." The colors of the coat of arms go back to the house of Nassau .