Brey (left) and Rhens on the Rhine

Panorama of Rhens by Jakob Becker 1833 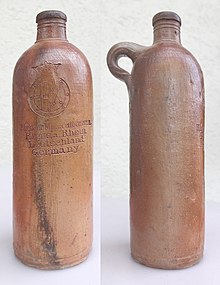 Rhens (/ ˈʁeːns /) is a town in the district of Mayen-Koblenz in Rhineland-Palatinate and the second administrative seat of the Rhein-Mosel community , which was created on July 1, 2014 and to which it also belongs. According to state planning, Rhens is designated as a basic center.

The location of the city on the relatively flat west bank of the Rhine is characterized by the contrast to the steep slopes on the east side, over which - diagonally opposite the city - the Marksburg towers. Rhens has been part of the Upper Middle Rhine Valley UNESCO World Heritage Site since 2002 .

In terms of traffic, Rhens is well served by the railway and the B 9 , and two routes on the Rheingoldstrasse lead into the hilly hinterland .

The first documentary mention of the place took place on September 29, 874, when the Archbishop of Trier Bertolf confirmed the possession of goods in Boppard , Spay , Oberspay and Rhens to the Kunibertstift in Cologne .

The Bailiwick of Rhens was owned by the Counts of Saffenburg in 1174 , who sold it to the Archbishop of Cologne for 200 marks . Since then Rhens has belonged to the Electorate of Cologne . The most important event in the history of the city was the formation of the Kurvereins zu Rhense in 1338 , in which the seven electors agreed on the future modalities of the election of a German king and the pope denied the right to approve him. The Königsstuhl in Rhens reminds of this event to this day .

In 1400 Wenceslas , son of Emperor Charles IV. , Was the Roman king of the three spiritual electors and of Ruprecht III. , the Count Palatine near the Rhine, voted out of office at Lahneck Castle in Oberlahnstein . Ruprecht was then elected the new king in Rhens.

It should be noted that the Königsstuhl stood directly on the Rhine before 1929 and is now on a hill in the direction of Waldesch .

From 1575 to 1647 there were witch hunts in Rhens . In the witch trials , 26 people, 23 women and three men, were executed for alleged sorcery. The most prominent and last victim was Margarethe Altenhofen , wife of the mayor Gerhard Altenhofen, who was executed on March 7, 1646. The incarceration and torture took place in the "Scharfen Turm" (part of the city wall, directly on the Rhine). The executions were carried out in at least two different locations.

The Rhenser Mineralbrunnen can look back on a long tradition . Mentioned for the first time in the 16th century, mineral water has been industrially bottled here for over 150 years. The company is one of the most important suppliers of mineral water and sweet drinks in Germany. It offers u. a. the brands "Rhenser", "Perling" and "Silvetta".

On November 7, 1970, the Kripp area with 248 residents was transferred to Koblenz . Since September 6, 1984 Rhens has again the town charter.

The development of the population of Rhens in relation to today's urban area; the values ​​from 1871 to 1987 are based on censuses:

The city ​​council in Rhens consists of 20 council members, who were elected in the local elections on May 26, 2019 in a personalized proportional representation, and the honorary city ​​mayor as chairman.

The coat of arms shows the black Electoral Cologne cross in its left half and two golden city keys in its right half.

Since 1984 the city of Rhens has had a partnership with the city of Bramley in Great Britain.

Rhens belongs to the "Loreley wine-growing area" in the Middle Rhine region . Two wine-growing businesses are active in the village, the area under vines is 2 hectares. About 90% of the wine grown are white grape varieties (as of 2007). In 1979, twelve farms were still active, the vineyard area was 10 hectares.

Rhens has a train station on the left Rhine route . Regional trains of the Trans regio- operated line RB 26 between Mainz and Cologne stop here every hour . The VRM regional bus line 670 provides a direct connection to Koblenz city center every half hour and to Boppard from Monday to Friday.

By B9 Koblenz and are in traffic Bingen (and from there to the A 60 ) directly accessible.