Polch is a town in the Mayen-Koblenz district in Rhineland-Palatinate . It belongs to the Maifeld community and is its administrative seat. According to state planning, Polch is designated as a basic center.

Polch was first mentioned in 1052 in a document from the Archbishop of Trier Eberhard . Archaeological finds show that the fertile area around and in Polch was settled in the earliest times ( Bandkeramische Kultur - settlement find around 1913). During the Merovingian period (around 500 AD) "In den Gaichen" was a small burial ground that was discovered in 1973 while a house was being built. It contains 10 graves from the second half of the 5th century and the beginning of the 6th century. Polch was originally an imperial estate with its own jurisdiction and was administered by the "heirs of Polch". In 1354 Archbishop Balduin von Trier acquired jurisdiction and a bailiff took over the administration. Remnants of the Vogtburg are no longer there. In the Middle Ages, Polch was protected by a defensive wall and moat, the street "Am Wallgraben" still bears witness to this today.

From 1798 to 1814, Polch was the main town ( chef-lieu ) of a canton in the French arrondissement of Koblenz , which was part of the Rhine-Moselle department . Polch has been the seat of the Maifeld municipal administration since 1968. On December 19, 1987, Polch was granted city rights.

The development of the population of Polch, the values ​​from 1871 to 1987 are based on censuses:

The city ​​council in Polch consists of 22 council members, who were elected in a personalized proportional representation in the local elections on May 26, 2019 , and the honorary city ​​mayor as chairman.

Blazon "Divided by silver and red, above a continuous red bar cross, below a golden leaf crown with three blue and two red stones in the coronet."

The coat of arms of the Maifeld community is the same as that of the city of Polch, only with a wide shield border. 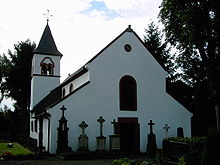 Chapel of St. George in the cemetery

The Catholic parish church of St. Stephan was built between 1849 and 1852 in neo-Romanesque style. The twin towers are over 50 meters high.

The Georgskapelle in the cemetery on the southern outskirts is one of the oldest churches in the Eifel. It is located away from the historical buildings on the walled cemetery of Polch with an ancient chestnut avenue. The first verifiable documentation of a church in Polch comes from a document from the year 1052.

A Roman temple is presumed to be the predecessor of the George Chapel. An indication of this could be the Roman tombstone walled up as a lintel over the door of the southwest aisle. The clearly legible inscription reads: " C. (= Gaio) Attio Caro / et Iul (iae) Suausiae / uxori, At (t) io Paterno / At (t) iae Avianae fili (i) s " (translation: [Gravestone ] for Gaius Attius Carus and his wife Iulia Suausia, [also] for their children Attius Paternus and Attia Aviana.) Some of the letters are written in ligature, which occasionally leads to misinterpretations of the Latin wording.

At the top of the north-western gable is another, possibly also Roman, spoil : a female bust, which could be a representation of the goddess Ceres .

The former synagogue in Polch was built from 1867 to 1877 according to plans by the Koblenz architect Hermann Nebel . This synagogue was also devastated during the Reichspogromnacht . However, since the fire was quickly put out, it did not burn out. The synagogue was repaired by the community and is now used as a space for cultural events.

In addition to the hospital chapel in the old hospital in Viedel, a simple neo-Gothic chapel, the so-called "Viedeler Kapellche", was built in 1881 by Peter Geisen on the outskirts of the village. A simple neo-Gothic quarry stone building, with two bays with a three-sided end, is structured by double-stepped buttresses, pointed arched windows and three tufa four-pass windows in the apse.

The "Viedeler Bur" = (Born = water source) is a fountain that was fed from a spring. It dates from 1854 and was on loan in Polch's city park. In 2007 the fountain was restored and set up opposite the old location on the corner of Kehrstrasse and Bachstrasse. The bur is supplied with water through a circulation system. The surroundings of the “Viedeler Bur” and the urban green area were redesigned.

Further sights are a baroque courtyard of the St. Matthias Abbey (1748) and the local museum "Christina's Stuben" in the bee garden.

Thanks to many new development areas and numerous jobs, Polch owes its population to have grown significantly in recent years.

There is no longer a train connection. On the section from Mayen via Polch to Ochtendung of the Koblenz-Lützel – Mayen Ost railway line (former course book route 603) and the former Polch – Münstermaifeld railway line, there is now the Maifeld cycle path .

The best-known companies based in Polch are Griesson - de Beukelaer , Niesmann + Bischoff and the large bakery Lohner.

The “Kaaner-Hof” in the Kaan district, two kilometers from Polch, offers an extensive program of recreational activities and relaxation. A large number of rare pets are kept on the farm.

Local parishes of the Maifeld community in the Mayen-Koblenz district