The title of this article is ambiguous. Further meanings are listed under Nickenich (disambiguation) .

Nickenich is in close proximity to the Laacher See (three kilometers as the crow flies from the town center), seven kilometers from Andernach .

According to archaeological finds, Nickenich was a settlement site of the Celts well over 2000 years ago ( tumulus grave finds, cremation graves and urns in the local area). Traces from the Celtic settlement period were discovered and uncovered in 1993 and 1994 by the State Office for the Preservation of Monuments of Rhineland-Palatinate in Mainz in the Nickenich area "on the Hönsenacker". The Celtic settlement period followed around 50 BC. The Romans. In a document dated May 5, 1069, in which Pope Alexander II confirmed a donation from Bishop Odos of Toul (1052-1069) over a quarter of Nickenich's own church with 400 acres of land to the monastery of St. Salvator in Toul, Nickenich was named Nethenis first mentioned. A derivation from the mainland Celtic is also being considered. At the time of the Celts and Romans, the settlement of villas and courtyards is said to have been called "NIGIDIACUM" (Latin form from Celtic "NIGIDIACOS") and mean something like "Settlement of NIGIDIUS", similar to Andernach from "ANTUNNACUM" (Celtic "ANTUNNACOS "). After the departure of the Romans, the Franks settled in the region.

The existence of Nickenich has been almost completely proven as a place since the 12th century. Large knight families and high-ranking personalities lived here, for example the knights Gramann von Nickenich (1373-1518) and the knights von Nickenich , later knights from the pond in Nickenich after the Weiherhof was enfeoffed.

Around 1332 the Carthusian monastery of St. Alban was founded in Konz . The Electoral Trier fiefdom (former Karthäuserhof ( Zehnthof ) with buildings from 1755) was owned by the knight dynasty of the Winkel von Nickenichs . After the knight dynasty had died out, it was transferred to St. Alban's monastery in 1340 by the Archbishop and Elector of Trier , Baldwin of Luxembourg .

The development of the population of Nickenich, the values ​​from 1871 to 1987 are based on censuses: 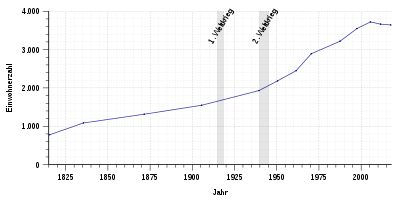 The municipal council in Nickenich consists of 20 council members, who were elected in a personalized proportional representation in the local elections on May 26, 2019 , and the honorary local mayor as chairman.

Detlev Leersch (CDU) became local mayor of Nickenich in 2018. In the direct election on May 26, 2019, he was confirmed in office for five years with 83.00% of the vote. Leersch's predecessor was Gottfried Busch (CDU), who died unexpectedly after 26 years in office on May 17, 2018.

The partner municipality has been Montfort-l'Amaury ( Île-de-France ) in France since 1973.

Since 1981 the place has had the Pellenz Museum for Archeology , which was initially housed in the rooms of the Nickenich elementary school. Since 2002 it has housed finds from prehistory and early history as well as from Roman times in a part of the former Karthäuserhof ( tenth courtyard of the former Carthusian monastery of St. Alban) .

A Gallo-Roman tomb from the 1st century AD, the so-called " Tumulus von Nickenich ", was rebuilt as a reconstruction on the western edge of the village on Laacher Straße .

From the parish church built around 1200 on the remains of a Roman villa (demolished in 1842) the Romanesque tower has been preserved to this day. The current parish church was planned by Johann Claudius von Lassaulx . Completed in 1848 and dedicated to St. Arnulfus von Metz. It is stylistically characterized by features of classicism as well as early neo-Romanesque and is considered one of Lassaulx's main works, not least because of the variously combined regional natural stones on the outside. The renovation of the interior was completed in September 2005, the pillars and ceiling are now decorated with ornaments. Due to its size compared to the other churches in the area, it is also called Pellenz Cathedral .

An old rifle brotherhood is located in Nickenich: The St. Sebastianus Brotherhood and Schützengilde 1742 e. V. Nickenich. On May 25, 1742, the well- respected and respectable citizen Anthon Eltzer, Sendscheffe and administrator of the baronial castle of Bürresheim there in Nickenich, founded the brotherhood with the primary aim of celebrating the feast of the holy martyr Sebastianus in Nickenich, and that at his intercession all epidemics and diseases of the body and soul are kept away from all brothers and sisters who incorporate themselves into the brotherhood . In addition, the place has a lively club life, over 35 clubs are represented in the place.

Personalities of the place