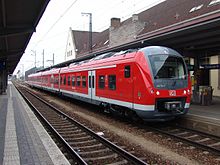 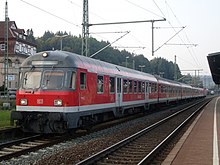 The regional train (former spelling: RegionalBahn ; short: RB ) is a type of train (“product”) that was introduced by the Deutsche Bundesbahn at the end of the 1980s . At that time it replaced the classic local train (N), today comparable trains from third-party providers are also referred to as RB. The RB differs from the Regional Express (RE) in that it has shorter distances between stops and routes, as well as its lower travel speed.

It is also a legal term that is defined in the General Railway Act .

Initially, only local transport lines that ran in regular intervals and operated with new or modernized vehicles were referred to as RegionalBahn, the remaining local trains continued to run without explicit specification of the train type. RB has been used as a generic abbreviation since January 1, 1994, when Deutsche Bahn (DB and DR) merged to form Deutsche Bahn AG . In 1995 the name was extended to all local trains.

Until 2010 , just like the Regional Express , only Deutsche Bahn trains were referred to as regional trains. Private railway companies used their own name as a product name, for example metronom (Me) , Erfurter Bahn (EB) or Süd-Thüringen-Bahn (STB) . In 2010, Deutsche Bahn AG approved the use of its train types for other rail transport companies. However, subject to conditions: the trains provide the same services as those of Deutsche Bahn. For example, an RE stands for a fast train that connects regions to the long-distance network. A regional train, on the other hand, stops far more frequently and must at least connect passengers to the RE network. The slow S-Bahn trains run in city traffic. In addition, the railway operators would have to pay a small license fee to the state company. With the timetable change in December 2012, VBB, as a pioneer, introduced a uniform product name for all lines. In December 2015, the NVS Thuringia will also be issuing standardized train types for all regional trains in its network.

The German Patent and Trademark Office does not consider the spelling RegionalBahn as worthy of protection.

Regional trains mostly run within a regular schedule . As a rule, they run on fixed lines every hour. In metropolitan areas they also run every 30 minutes if there is a corresponding demand, but sometimes only every two hours in rural areas. On many branch lines , the regional train is the only rail service. In recent years, these lines have often been assigned to private railways because they can be operated with a relatively small fleet of vehicles. After the takeover by private railways or improvements to which DB Regio undertook within the framework of transport contracts, more modern vehicles and improved service were able to achieve in some cases significant increases in passenger numbers.

On most of the main railway lines, the regional trains serve all train stations and stops , in conurbations with parallel traffic with S-Bahn trains often only the stops with a higher number of passengers. Earlier this is the type of train was StadtExpress applied, which was converted in most cases in a local train. On main routes, regional train lines usually alternate with the Regional Express (RE), which usually only stops at more important stations. Regional trains can also run over very long distances here, see the following section.

If stops that are on the regular route of the regional train are not served as planned, this is usually indicated separately. It is increasingly the case, especially in rural regions, that a regional train does not stop at every station; instead, breakpoints are shown as a demand stop . The destination station and sometimes a short name consisting of train type (RB) and line number are displayed in and on the trains. Some of them also have a name within a state or regional association (the "Mittelrheinbahn", for example, connects Cologne in North Rhine-Westphalia with Mainz via Koblenz in Rhineland-Palatinate ).

There is a wide variety of vehicle materials used. In addition to converted "Silberlingen" ( n-wagons ) and their Reichsbahn counterparts, the Halberstadt type passenger coaches, double-decker coaches of various types with different electric locomotives and electric multiple units of the four-part series 425 , the two-part series 426 , the Bombardier Talent 2 or Stadler Flirt are used . The latter can show their strengths particularly as a regional train, as considerable travel time savings can be achieved with short stopping distances through the ability to accelerate. At the DB Regio Franconia in the Würzburg area (Mainfrankenbahn), as well as on various routes at the DB Regio Allgäu-Swabia around Augsburg and Munich, vehicles of the 440 series are mainly used.

The DB has equipped all 642s at the Rostock depot with ticket machines.

In contrast to long-distance passenger transport , regional trains sometimes run without train attendants if the technical equipment of the train material allows this and no train attendants were required in the route tender. In particular, railcars are in many cases only manned by the driver , who is then also the train driver , since the door closing process can be regularly initiated and monitored from the driver's cab. In this case, tickets are randomly checked by train attendants or external inspection services (also in civilian uniforms).

The ticket sale takes place partly in the train from ATMs instead - according to tariff, are possibly also canceling the train. On the other hand, some conditions of carriage only allow passengers to travel with previously purchased and validated tickets (machines and validators outside on the platforms). Subsequent redemption on the train is then excluded (especially in many transport associations); anyone who does not have a ticket is considered a fare dodger .

A railway company (EVU), which is a regional train, is generally not subject to the direct supervision of the EBA (§ 5 Paragraph 1e Item 6) .

It also does not require a safety certificate (Section 7a, Paragraph 1) .