The market Murnau am Staffelsee (officially: Murnau a.Staffelsee ) is a municipality in the Upper Bavarian district of Garmisch-Partenkirchen . The market was built around Murnau Castle from the 12th century . The place is part of the tourist region Das Blaue Land .

Murnau is located in the foothills of the Bavarian Alps about 70 km south of Munich . From the village you can see the peaks and ridges of the Ammergau Alps from Hörnle to Ettaler Manndl in the southwest, the Wetterstein Mountains with Zugspitze and Alpspitze in the south and the Ester Mountains with the striking Kistenkar and the Walchensee Mountains with Heimgarten and Herzogstand in the southeast. During the last Ice Age ( Würme Ice Age ), the area of ​​today's Murnau lay under an approximately 600 m thick ice sheet.

The Staffelsee borders directly on the western outskirts. In the south, the Murnauer Moos is the largest closed moor area in Central Europe.

Until the 11th century

The area around Murnau was already settled in pre-Christian times. From the reign of Septimius Severus there was the Via Raetia, a Roman road over the Brenner Pass and Seefelder Sattel through the upper Isar and Loisach valleys to Augsburg , which existed as the imperial and trade route Via Imperii until the 19th century. Signs of Celtic and Roman settlement can also be found on the Moosberg in the Murnauer Moos , which has since been removed . At that time Murnau was nothing more than a more or less fortified post office called Murau or Mureau . The name, from which Murnau later developed, referred to the current Murnauer Moos (Mure) and the Loisach Valley (Aue) .

Murnau was first mentioned in a document around 1150.

The Church of St. Nicholas was first mentioned in a document around 1300 . Murnau Castle was first mentioned in a document in 1324. In 1350, Ludwig the Brandenburger confirmed the ban on blood , the right to defeat, the weekly market on Wednesday and the Michaelimarkt in Murnau . Around 1400, Ettal Monastery received the high jurisdiction previously exercised by the Weilheim district court for its Murnau court .

The first view of the town (the castle) by Philipp Apian dates from 1560.

1632-1648 took place the occupation by Swedes and French and billeting of imperial troops during the Thirty Years' War . In 1634 the plague broke out. The Church of St. Nicholas was rebuilt from 1717 to 1734. In 1722 the Leonhardi and Scapular markets were approved.

In 1803 the Ettal Abbey was secularized and the Murnau nursing office was repealed. Murnau was assigned to the Weilheim district court . The town hall was rebuilt in 1842. In the middle of the 19th century, almost the entire structure of Murnau was destroyed in a city fire. The subsequent reconstruction led to the closed place that is presented today. In 1868 the Murnau e. V. founded. The Weilheim – Murnau line was opened in 1879, and the Murnau-Garmisch line in 1889. In 1900 the Murnau-Oberammergau railway line opened. 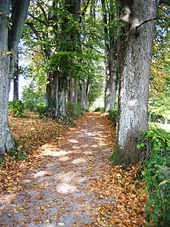 At the beginning of the 20th century, the appearance of the town was changed on the initiative of Emanuel von Seidl .

The two artist couples Gabriele Münter / Wassily Kandinsky and Marianne von Werefkin / Alexej Jawlensky stayed in Murnau for the first time in 1908 to paint together. Her pictures, which she painted of the place and its landscape until 1914, made Murnau known to an art audience all over the world. This period before the First World War is what the term "Murnau Time" means in art history. She is directly connected to these four artists and stylistically marks the development from Expressionism to Abstract Art in painting . The outstanding cultural attractions of Murnau today include the Münter House ("Russenhaus"), which was renovated in 1999 , / which Münter bought in 1909 and into which she moved with Kandinsky, as well as the Castle Museum with its art collection.

In 1923, numerous local residents took part in the Hitler coup in Munich and were awarded the blood order . In the Reichstag elections in 1924, the National Socialists otherwise without a chance in Germany received almost 33 percent of the Murnau vote. From 1923 to 1933 the writer Ödön von Horváth lived and worked in Murnau. In 1924 a private high school for girls (later grammar school ) was founded. The new hospital, donated by James Loeb , was built in 1932. In the Reichstag election on March 5, 1933 , 55.8% of those eligible to vote in Murnau voted for the NSDAP (German Reich: 43.9%, Upper Bavaria-Swabia: 40.9%).

In 1953, the professional association accident clinic in Murnau was opened in the south-east of the village, and has been continuously expanded since then. The Goethe Institute opened its doors in 1954. In 1956 and 1971 the barracks were occupied again by the German armed forces, one of which (Kemmel barracks) was closed again in 1994. Numerous country houses, including a few villas and a gym, built by Emanuel von Seidl , were demolished in the 1960s and 1970s. The Staffelsee-Gymnasium was expanded to a full school in 1967.

On July 1, 1972 , Murnau was separated from the Weilheim district and assigned to the Garmisch-Partenkirchen district. On March 12, 1979, the name of the community Murnau was officially changed to Murnau am Staffelsee .

In 1970, the first remote data transmission to pharmaceutical wholesalers across Bavaria took place via telephone from the Engel pharmacy owned by the pharmacist Gustav Hell together with Siemens.

In 1979 a youth center was created, which in 2006 got its own house named after the founder, the Erlhaus. The Murnauer Moos became a nature reserve in 1980 . In 1993 the castle museum was opened. The historic town center was renovated from 1998 to 2000. The redesigned Münterhaus was reopened in 1999. In 2000 the pedestrian zone and underground car park were inaugurated.

In 2001 the new Kurpark and Münter-Platz as well as the new Staffelsee-Gymnasium were inaugurated.

Murnau acquired the site of the former Kemmel barracks in 2002. It was converted into a commercial and residential park, the Kemmelpark .

In 2006 the Goethe Institute was closed and demolished. In autumn 2009, three semi-detached houses were built at its location.

Since December 9th, 2008 the assembly hall of the Staffelsee-Gymnasium has been named after the writer Ödön von Horváth .
In 2010, the Murnau post office was closed and moved to the Feneberg supermarket. The previous post office building is a listed building and will be preserved.

On July 1, 1974, the previously independent community of Weindorf was incorporated. On January 1, 1978, smaller areas of the communities Riegsee and Seehausen on the Staffelsee were added. With its incorporation on May 1st, 1978, Hechendorf marks the end.

Blazon : The coat of arms shows a left-looking, green dragon on a silver background, tongue and claws red.

When the dragon appears in the Murnau coat of arms is not known for sure. The first community seal dates from 1374.

Culture and other things

In Murnau there is the Emanuel-von-Seidl- and the James-Loeb-Grundschule, a middle school that was named after Max Dingler until July 2011 and after Christoph Probst from 2016 , as well as the Staffelsee-Gymnasium, a school with science and technology and linguistic orientation. Murnau has had a secondary school since the 2011/12 school year, which, after originally only being planned for boys, has also been accepting girls since the 2013/14 school year. Initially, the students were housed in temporary containers, at the end of 2014 the first phase of construction was completed and the new school building moved into. The total investment was 21 million euros. The first graduate class left secondary school in the 2016/2017 school year.

In 1964 the Camerloher Musikschule Murnau e. V. founded. She is a member of the Association of Bavarian and German Singing and Music Schools.

Murnau has two hospitals: The Murnau Accident Clinic and the Hochried Clinic, a specialist clinic for pediatric and adolescent medicine. The internal clinic of the Garmisch-Partenkirchen district hospital in Murnau has now been housed in the building of the Murnau professional association accident clinic.

During the Nazi era , the Kemmel barracks was built in 1935 , the name of which is reminiscent of the conquest of the Kemmelberg by German troops during the Fourth Battle of Flanders . Murnau received a garrison from the mountain troops for the first time in 1938 . Christoph Probst , a member of the White Rose who was born in Murnau in 1919 , was executed in Munich in 1943 . During the Second World War, Polish officers were imprisoned in the Werdenfels barracks ( Oflag VII A ).

In 1965/66 a HAWK battery of the French 402e régiment d'artillerie anti-aérienne was stationed in Murnau.

Murnau has housed a telecommunications battalion since 1966. Initially set up as Mountain Telecommunication Company 8 in Mittenwald in 1956 , Mountain Telecommunication Battalion 8 (later renamed Mountain Telecommunication Training Battalion 8, then Mountain Staff Telecommunication Training Battalion 8) was relocated to Murnau, where it was stationed in the former Kemmel barracks until March 31, 1994 . On April 1, 1994, it moved into the much smaller but more modern Werdenfels barracks on the northern outskirts of Murnau. Since January 1, 1996 soldiers from Murnau have been regularly represented in foreign missions of the German armed forces ( IFOR , SFOR , EUFOR , TF FOX , KFOR , ISAF ). In the course of the transformation of the Bundeswehr and the associated dissolution of the 1st GebDiv (mountain division), the battalion was renamed Command Support Battalion 293 in 2006 and placed under the armed forces base . According to the structural planning of the Bundeswehr, the Murnau site was originally supposed to be completely dissolved. But only the driving school company was dissolved. Structural security has existed for the Werdenfels barracks since the stationing concept was published in 2011 . In the course of taking this structure, the Murnauer Feldjägerkompanie was dissolved in 2014, and its area of ​​responsibility was taken over by the Munich Feldjägerkompanie.

The Murnau medical supply center is also stationed in the Werdenfels barracks.

→ Main article : List of personalities from the community of Murnau am Staffelsee

Districts of the market Murnau am Staffelsee

Municipalities in the district of Garmisch-Partenkirchen