Church and rectory in Seehausen am Staffelsee 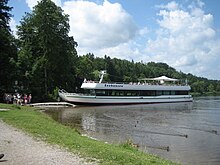 Passenger ship Seehausen on the Staffelsee

Seehausen am Staffelsee (officially: Seehausen a.Staffelsee ) is a municipality and a state-approved resort in the Upper Bavarian district of Garmisch-Partenkirchen and the seat of the administrative community of the same name . The place is part of the tourist region Das Blaue Land .

There is only the district Seehausen a. Staffelsee.

The place Seehausen was mentioned around 650 and from 1330 belonged to the Ettal Monastery , which in turn was part of the Electorate of Bavaria and was part of the Murnau court until the abolition of the monastery , which was temporarily also imperial in 1803 . In 1773 the island parish church, with its remarkable baroque furnishings, was transferred to the mainland, financed by the Augsburg publisher and bookseller Matthäus Rieger , a native of Seehaus.

In the course of administrative reforms in the Kingdom of Bavaria , the municipality of Seehausen, which belonged to the Weilheim district court , was created with the municipal edict of 1818 .

During the Nazi era , a satellite camp of the Dachau concentration camp was located on the Burg peninsula belonging to Seehausen. The local, armaments-important companies Feinmechanische Werkstätten Tipecska, the Jung work command and Otto Heinrich Muck were able to access workers. The camp inmates were liberated by US Army soldiers at the end of April 1945 .

In the listed rectory , the Staffelsee Museum reports in particular on the history of the place and the lake, reverse glass painting and nature. 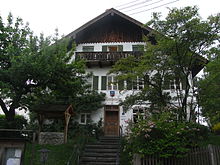 His predecessor was Ulrich Willburger (CSU). He was again in 2002 the successor to Sylvester Eichberger (CSU).

The description of the coat of arms reads: Wavy divided by blue and silver; above a silver pike turned to the left, below a growing red dragon's trunk.

→ Main article : List of architectural monuments in Seehausen am Staffelsee

State road 2372 , which connects the town with the communities of Murnau, Uffing and Spatzenhausen, runs through the town . In public transport , the place can be reached with the bus lines 9601 and 9601k of the RVO . The closest train station is in Murnau , which is directly adjacent to the Riedhausen district. The MS Seehausen passenger ship , which connects the town with Murnau and Uffing, operates on the Staffelsee .

In 2017 there were the following institutions:

Municipalities in the district of Garmisch-Partenkirchen