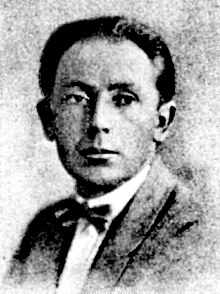 Friedrich Wilhelm Murnau , also FW Murnau , (* December 28, 1888 as Friedrich Wilhelm Plumpe in Bielefeld , †  March 11, 1931 in Santa Barbara , California ) is considered one of the most important German film directors of the silent film era . His work, influenced by Expressionism , his psychological image management and the then revolutionary camera and montage work by Murnau opened up new possibilities for the young film medium . Among his most famous works are Nosferatu - A Symphony of Horror(1922), The Last Man (1924), Faust - a German folk tale (1926) and Sunrise - Song of Two People (1927).

Friedrich Wilhelm Plumpe grew up in a wealthy middle-class family; the father was a cloth manufacturer, the mother a teacher. In 1892 his family moved to Kassel . From 1898 to 1902 Plumpe lived on Elfbuchenstrasse in Kassel. After attending high school in Kassel, he began studying philology and art history in Berlin and Heidelberg . There, the famous director Max Reinhardt became aware of him during a student performance. Reinhardt made it possible for him to attend the Max Reinhardt Drama School and employed him as an actor and assistant director.

Around 1910 Plumpe took the stage name Friedrich Wilhelm Murnau (after the place Murnau am Staffelsee ). In addition to the artistic aspect, this was a clear sign of the break with his parents, who refused to accept his homosexuality as well as his acting and directing ambitions. His artist friends included the author Else Lasker-Schüler and the expressionist painters of the group Der Blaue Reiter .

Murnau in the First World War

During the First World War , Murnau took part as a lieutenant in the 1st Guards Regiment on foot and from 1917 as a fighter pilot until he landed on the territory of neutral Switzerland either intentionally or through a navigation error . There he was initially interned in Andermatt , but after winning a staging competition for the patriotic play Marignano was able to work at the Lucerne Theater. The war experiences were formative for Murnau as for many of his generation; his then partner Hans Ehrenbaum-Degele fell on the Eastern Front. Some critics see traces of the war impressions in films like Nosferatu .

In 1919 Murnau returned to Berlin and began working for film. His first feature film, The Boy in Blue, based on motifs from the painting The Blue Boy , has disappeared , as have some of his later films . With the film The Bucklige and the Dancer , a very fruitful collaboration began with the screenwriter Carl Mayer , who subsequently wrote the books for six other Murnau films. Other artists with whom Murnau preferred to work are the screenwriter Thea von Harbou , the cameraman Carl Hoffmann and the actor Conrad Veidt . His most famous film from this period is Nosferatu, a symphony of horror from 1922 with Max Schreck in the title role, a film adaptation of Bram Stoker's Dracula , which had to be renamed due to licensing problems.

The success of his films earned Murnau a contract with Universum Film (UFA) . He first directed the film The Last Man for UFA in 1924 , in which Emil Jannings played a hotel porter who was demoted to the position of a toilet man and who was broken by it. The "unleashed" or "flying" camera used in this film by Murnau and the cameraman Karl Freund freed the camera from its static and enabled new perspectives (to follow the smoke of a cigarette, for example, Freund strapped the camera to a fire ladder and moved this). Murnau also introduced the “subjective camera” in this film, which reproduces events through the eyes of an acting person. Murnau's ability to tell a story using purely cinematic means is also evident in the fact that he was able to do almost without subtitles in this film, which is unusual for the silent film era. Murnau concluded the series of his films made in Germany in 1926 with Tartüff after Molière and Faust - a German folk tale .

Murnau in the United States 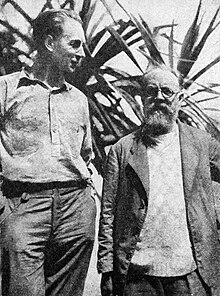 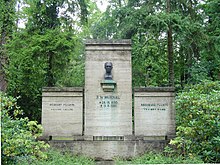 Murnau's successes in Germany and especially the American version of The Last Man in 1925 had made Hollywood aware of him. Murnau received a contract offer from the American producer William Fox , who guaranteed him full artistic freedom. His first film, Sunrise, based in the USA , based on the story Die Reise nach Tilsit by Hermann Sudermann , won three Oscars at the very first Academy Awards in 1929 , but did not quite meet commercial expectations. For this reason and because of the increasingly difficult economic situation of the Fox company and the situation in Hollywood on the threshold of the sound film, Murnau increasingly had to accept interventions in his artistic concept in his subsequent films; he was even replaced as director in the film City Girl and an audio version was subsequently produced without his influence.

Disappointed by the constraints of Hollywood, Murnau terminated his contract with Fox in 1929. After an unsuccessful attempt to do business with UFA again in Berlin, he bought a sailing yacht, determined to make his next film according to his own ideas, and went to Tahiti to meet with the director and documentary filmmaker Robert J. Flaherty to shoot the film Tabu . During the filming there were considerable difficulties with the film material company financing the costs of the film. Eventually, Murnau parted ways with Flaherty, who had stronger documentary ambitions, and produced the film at his own expense. The film, shot on the island of Bora Bora exclusively with local amateur actors, became a style-defining mixture of documentary and melodrama. The distribution of Murnau's self-financed film, on which he had spent all of his fortune and deeply in debt, was taken over by the Paramount company, which was so impressed by the film that they offered Murnau a ten-year contract.

Murnau did not live to see the premiere of Tabu on March 18, 1931. On March 11, 1931, shortly before a European promotion tour of Murnau, his servant, the 14-year-old Filipino Garcia Stevenson, lost control of the car in which the two were driving on the coastal road southeast of Santa Barbara (California). so that it collided head-on with a truck. Murnau died of his injuries a few hours later. Only eleven people attended his funeral on March 19, including Greta Garbo .

His body was transferred to Germany and buried in the south-west cemetery in Stahnsdorf . Carl Mayer and the director Fritz Lang gave the funeral orations. Among the mourners were Robert J. Flaherty , Emil Jannings , Erich Pommer and Georg Wilhelm Pabst . Karl Ludwig Manzel designed his tombstone . The grave is located in the Schöneberg block, field 3a, hereditary burial 5. It is dedicated to the city of Berlin as an honorary grave . In July 2015, the grave was opened by grave robbers and Murnau's embalmed head was stolen. The actor Gerd J. Pohl then offered a reward, but the head has so far been lost.