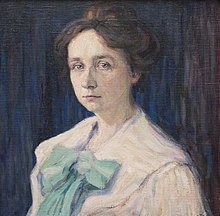 Gabriele Münter (* 19th February 1877 in Berlin , † 19th May 1962 in Murnau ) was a painter of Expressionism , next she drew and worked in the field of printmaking . She was a member of the Neue Künstlervereinigung München (NKVM) and later closely associated with the Blue Rider . As Wassily Kandinsky's long-term partner , she later saved a significant part of his works through the war and post-war period and made them accessible to the public, along with pictures by the artist friends of the Blauer Reiter and her own pictures.

Gabriele Münter was born in Berlin on February 19, 1877, the youngest of four children of the dentist Carl Münter and his wife Wilhelmine. A year later the family moved to Herford in Westphalia , then to Koblenz . Her father died in 1886. Together with two siblings, Gabriele Münter grew up with their withdrawn mother without much education; a circumstance to which she later attributed her awkwardness in dealing with other people. Her artistic talent had already shown in her school days. Then in spring 1897 she began attending Willy Spatz's women's art school in Düsseldorf (the state academies were still closed to women in art ). However, when her mother also died in November, she gave up training again. Financially independent through her parental inheritance, she and her sister went to visit relatives in the USA the following year. For two years the sisters traveled through Missouri , Arkansas and Texas ; Gabriele Münter documented the journey through a large number of photos. 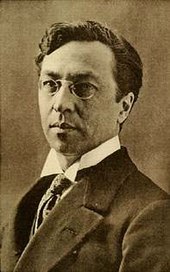 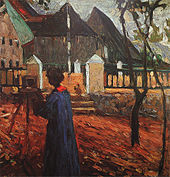 In 1901 Gabriele Münter moved to Munich . At that time, however, women were not yet accepted into the local art academy. Münter therefore continued her studies at the painting school of the Artists' Association , where she first studied in the classes of Maximilian Dasio and Angelo Jank and then switched to Wilhelm Hüsgens and Waldemar Hecker's small, progressive art school " Phalanx ", where Wassily Kandinsky also worked . In 1902 Kandinsky moved to Kochel am See for a few weeks to paint landscapes with his students . Gabriele Münter had not previously dealt intensively with open-air painting. So this was her first exercise in the field. While he was painting in Kallmünz in the summer of 1903 , Kandinsky became engaged to Münter, although he was still married. The liaison remained hidden from the other participants in the painting school. Kandinsky was her teacher for a year; then the school closed, but Kandinsky remained, married until 1911, Münter's lover, with whom she lived openly. The two made numerous trips together, e.g. B. to Tunisia , the Netherlands , Italy and France .

During their first stay in Paris in 1906/1907, Münter remained unaffected by modern French painting and continued to paint “in the post-impressionist style”. She reports about it: "When I was in Sèvres with K. [Andinsky] in 1906-07, K. [Andinsky] didn't look for Matisse, Picasso or the other greats." She made numerous woodcuts and linocuts, over a quarter of her graphic work was created. After their return to Munich in 1908, Münter and Kandinsky set off for Lana in South Tyrol, where both still painted late impressionist open-air studies in rather small formats.

After returning to Munich from Lana, the couple found a letter from Marianne von Werefkin , who was staying with Alexej Jawlensky in Murnau . They were asked by Werefkin to join them in the countryside at the Staffelsee. This resulted in a meaningful collaboration between the two artist couples. “Under the stylistic and technical influence of Werefkin and Jawlensky”, Münter and Kandinsky were “inspired” to make that “great leap from painting nature, more or less impressionistically, to feeling content, abstracting, giving an extract”, which Münter spoke of. In a short time, Münter developed through his far more progressive painting colleagues into one of the most important German expressionist painters alongside Paula Modersohn-Becker .

After their first stay in Murnau together, the relationship between the two painter couples may have deteriorated for a short time. There is a lot to suggest, because at Christmas 1908 Werefkin, Jawlensky, Adolf Erbslöh and Oscar Wittenstein came up with the idea of ​​creating the New Munich Artists' Association (NKVM) in the Werefkin's “pink salon”. In any case, Münter and Kandinsky were initially not involved in the project. Kandinsky was still annoyed about this years later.

In 1909, Münter acquired a house in Murnau on Kottmüllerallee, which is still popularly known today as the Münter House or "Russenhaus". Münter and Kandinsky lived and worked there in the summer months until 1914, provided they were not in Munich or traveling. During this time they received many visitors, collectors, critics and painter friends, Werefkin and Jawlensky, Franz Marc , August Macke and the composer Arnold Schönberg .

When there were more and more inconsistencies in the NKVM, which were sparked by Kandinsky's increasingly abstract painting - he was required to have "works that were as understandable as possible" - Kandinsky resigned the chairmanship of the NKVM in January 1911, but remained a member of the association. In June he developed plans for his own activities outside the NKVM. He intended to publish a “kind of almanac”. He won Marc over to participate by offering him the joint editing of the book Der Blaue Reiter . In the summer, Kandinsky and Marc decided to split off from the NKVM. They secretly prepared their own exhibition for the coming winter as a counter-exhibition to that of the NKVM. Macke was a confidante. Kandinsky painted the legendary abstract painting with the meaningful title “The Last Judgment / Composition V”, which, due to its size of over five square meters, according to the statutes of the NKVM, could not be exhibited without a jury. Münter was privy to the intrigue from the start, as is evident from a letter from Kandinsky on August 6, 1911. At that time he reported to Münter about the status of the preliminary work: I paint and paint now. Lots of sketches for the Last Judgment. But I am dissatisfied with everything. But I have to find out how to do it! Only patience. On December 2nd, the picture was presented to the jury and, as Kandinsky intended and expected, failed. Pretending to “protest”, Kandinsky, Münter and Marc left the NKVM

On December 18, 1911, the first exhibition of the Der Blaue Reiter editorial team was opened in the modern gallery Thannhauser in Munich, in which at the same time the NKVM, which had shrunk to eight participants, showed its third and last exhibition.

After the First World War began in 1914, Gabriele Münter fled to Switzerland with Kandinsky. This was called an "enemy alien" and returned to Russia . From 1915 to 1920, Münter lived in Scandinavia . In 1916 there was a last meeting with Kandinsky in Stockholm . But from 1917 Kandinsky refused to have any contact with Münter. Only years later did she find out that that year he had married Nina Andreevskaja . 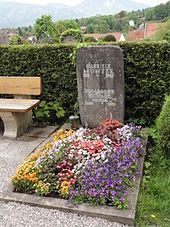 After separating from Kandinsky, she lived alternately in Cologne, Munich and Murnau from 1920. She was temporarily prevented from painting by severe nightmares and depression . After moving to Berlin in 1925 , she created female portraits in pencil, reduced to outline. In 1927 she met the philosopher and art historian Johannes Eichner (1886–1958).

In 1929/1930 a longer stay in Paris gave her work new impulses. In 1931 she moved to Murnau with Johannes Eichner as her second partner; There she mainly painted floral still lifes, but also numerous abstract studies. An exhibition ban by the National Socialists , who viewed their art as "degenerate" , forced them to retreat into private life in 1937.

After the Second World War , Münter was represented with nine works in a retrospective of the Blue Rider in Munich's Haus der Kunst in 1949 . From 1950 a complete exhibition of her work was shown in numerous German museums. In 1955 she was a participant in documenta 1 in Kassel . Gabriele Münter was also a member of the German Association of Artists , in whose annual exhibitions she took part in 1952 and 1960.

On her 80th birthday in 1957, she gave the city of Munich her collection, numerous works of her own, over 80 paintings by Kandinsky and works by other members of the Blue Rider , which made the Städtische Galerie im Lenbachhaus world famous in one fell swoop. Gabriele Münter died in 1962, her partner Johannes Eichner had died in 1958. Their common grave is in the cemetery in Murnau.

In 1956 Münter received the promotional award for fine arts of the state capital Munich . She is the namesake of the Gabriele Münter Prize for female artists in the field of fine arts at the Bonn Women's Museum . Many municipalities have named streets after her, such as Cologne, Kleve, Leverkusen, Wiesbaden, Fulda, Nidderau, to name just a few.

As part of the series “ German Painting of the 20th Century ”, a 300-pfennig postage stamp from the Deutsche Bundespost with the motif A. von Jawlensky and M. von Werefkin appeared in 1994 on a meadow near Murnau .

Four years after Münter's death, in 1966, the Gabriele Münter and Johannes Eichner Foundation was established based on a will. As an independent institution, it is called upon to preserve and manage its estate.

The Münter House in Murnau, which belongs to the Foundation, is now a memorial site showing very personal work, including furniture and walls painted by Kandinsky and Münter, as well as collections of folk objects.

No written evidence of Japanese culture has come down to us from Münter. Apparently, her estate does not provide any artistic objects on Japonism either . However, her prints and paintings make it clear that she was familiar with Japanese art from an early age. There are typically Japanese motifs and peculiarities that gave her inspiration for her own work. For example, since 1903/1904, like the Japanese, she used a clear frame for her woodcuts and linocuts . She produced her prints according to the "Japanese woodcut technique". Extreme portrait formats appear in her etchings in 1916.

As early as 1906 she used the “Japanese forced perspective” in her painting Allee in the Parc of Saint Cloud . When she drew and painted from 1908, during the Murnau period, together with Kandinsky, Jawlensky and von Werefkin in the Pfaffenwinkel , she came back to the “forced perspective”. She painted the picture Straight Street that led to Kochel am See three times . When she copied the first version, she wrote to Kandinsky: “But since I can't do it better, I copied it larger as accurately as possible but the small. Study is better. But I wanted to have it again. ”As far as the treatment of perspective is concerned, it was visibly based on Kandinsky's earlier version of the same motif. Stylistically, it followed Jawlensky's cloisonism .