Kochel am See (officially: Kochel a.See) is a municipality in the Upper Bavarian district of Bad Tölz-Wolfratshausen . It is the seat of the administrative association Kochel am See with Schlehdorf and includes around 70 percent of the area of ​​the Kochelsee and the entire Walchensee . 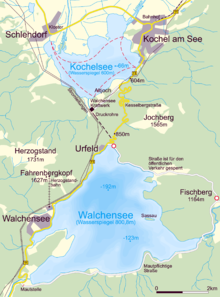 Kochel am See is located approx. 60 km south of Munich in the Bad Tölz-Wolfratshausen district.

The municipality has 12 officially named municipal parts (the type of settlement is indicated in brackets ):

The first known settlement in the Kochel area is the fortified protective system on the "Große and Kleine Birg", these two mighty boulders near Altjoch on the south bank of the Kochelsee and at the foot of the Kesselbergstrasse. It comes from the Urnfield Period and dates back to around 1200 BC. Dated. In the Roman Empire the area belonged to the province of Raetia . In 739 the Benediktbeuern monastery and the Kochel am See monastery were established. The Kochel women's monastery was destroyed by the Hungarians in 908 (955 at the latest) (and apart from the church it was never rebuilt).

From 1492 to 1495, Heinrich Barth from Munich had the connection from Kochelsee to Walchensee via the so-called Kesselberg extended from the mule track to the first Kesselbergstrasse. In addition to flourishing trade, this also brought horror and suffering, caused by attacks by the Tyroleans. From 1893 to 1897, Kesselbergstraße was rebuilt on the current route. At the beginning of the 20th century, automobile races with famous drivers such as Hans Stuck and Manfred von Brauchitsch took place there.

The Upper Bavarian town gained fame through an important historical event, the Oberland peasant uprising of 1705, the blackest day of which became known as the Sendlinger Murder Christmas . In the War of Spanish Succession Bavaria by the Austrian troops of Emperor was Joseph I. occupied. These squeezed the country out with contributions and forced recruitment. In 1705, “peasants” (mostly servants, day laborers and others who had little to lose - under the leadership of some civil servants and the military) rose against the occupiers in the Unterland and shortly afterwards also in the Oberland . However, they failed due to poor tactical decisions and insufficient military training and armament. According to tradition, during the massacre in the cemetery of the old parish church of Sendlinger St. Margaret, the last of the " Schmied von Kochel " (allegedly called "Schmiedbalthes", alias Balthasar Riesenberger) fell under the blows of the imperial troops, with the slogan of the insurgents "Dear." Die Bavarian than imperial ruin! ” on her lips and her flag in her hand. In contrast to Plinganser , the historically documented leader of the Unterländer, the myths about the blacksmith von Kochel probably only emerged in the 19th century through the publication Der Heldentod der Bayerischen Landesverteidiger bei Sendlingen, 1 hour from Munich, on Christmas Eve of the year 1705 by Hans Ferdinand Maßmann ; the actual existence of the legendary hero has not been established. The blacksmiths based in Kochel at the time in question had a different name and did not take part in the uprising. In general, the Kochlers did not seem to have participated in the failed revolution and did not complain of any victims.

Kochel was part of the monastic rule of Benediktbeuern , which was abolished in 1803 with the Benediktbeuern monastery . In the course of the administrative reforms in Bavaria in 1818 , the place at the foot of the Herzogstandes ( 1731  m ) became an independent political municipality.

Grave of Franz and Maria Marc in Kochel

At the beginning of the 20th century, the grandiose landscape of the Zweiseenland ( Kochelsee and Walchensee ) inspired numerous important artists. Terms such as “Malerwinkel” or “Blaues Land” emerged, which are reflected in many well-known works. The Walchensee cast a spell over Lovis Corinth and attracted attention in around 60 of his pictures, which are scattered around the world.

In the area around the Kochelsee, Franz Marc, together with some well-known colleagues from the artist group “ Blaue Reiter ” such as Wassily Kandinsky or Gabriele Münter, found numerous motifs for many world-famous works. In his honor, the Franz Marc Museum , whose importance extends far beyond Bavaria, is now in Kochel am See.

Also in the first quarter of the 20th century, the Walchensee power plant was built according to plans by the famous Oskar von Miller . The project, which was very controversial at the time, connected the two lakes. The water from the Walchensee falls 200 meters through six pipes and is directed into the Kochelsee. In view of the poor technical and economic situation at the time, this structural achievement deserves special recognition.

From 1920, a large radio station with a unique mountain antenna was built near the power station . The facilities were used for the first German ionospheric station until 1946.

The amplifier office was built in 1927 on Bahnhofstrasse, with an outstanding landscape embedded in the mountain silhouette . It is an important, well-preserved example of the Munich Post Building School and a protected architectural monument. The executing architect was Franz Holzhammer , the architect Hanna Löv also took part , whose planning particularly affects the motor vehicle halls, which form a large courtyard with the amplification office.

From the summer of 1944, parts of the rocket research of the Peenemünde Army Research Institute were relocated to the so-called WVA (Wasserbauversuchsanstalt GmbH Kochelsee), as the energy required for a supersonic wind tunnel system could be taken directly from the Walchensee power plant. As part of demilitarization , this high-tech facility was dismantled by the US Army in late 1945 and rebuilt in the Naval Ordnance Laboratory in White Oak, Maryland . Together with the facility, the researchers Rudolf Hermann (1904–1991), Hermann Heybey, Eber, Hermann Kurzweg (1908–2000) and Ernst Winkler were brought to the USA as part of Operation Paperclip .

In 1920 the Social University Leohaus, founded a year earlier, moved from Munich to the Seehof. The facility existed until 1994.

Another outstanding building was built in 1930 by the architect Emil Freymuth in the Bauhaus style: the "holiday home for workers, civil servants and employees of the state and municipalities".

The era of National Socialism did not leave Kochel unaffected: The Reich Youth Leader Baldur von Schirach lived in Aspenstein Castle , near which the Nazi driver's home was located. Today the Georg von Vollmar Academy is located at Aspenstein Castle , which offers adult political education in the service of social democracy near the southern shore of the lake.

After the 2014 local elections, the local council had 16 members. The choice brought the following result:

Another member and chairman of the municipal council is Mayor Thomas Holz. He has been in office since May 1, 2007 and was elected for a further six years on March 15, 2020 with 80.3% of the vote.

As a symbol of the local history, the right-hand side of the municipal coat of arms shows the shield, split three times by red and gold, with a silver location, which can be identified for the first time around 1500 as a secondary coat of arms of the monastery. The other side shows the mountains dominating the country in silver against a blue sky. 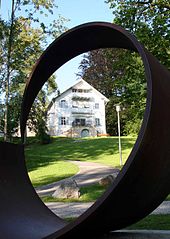 The Franz Marc Museum (old building), in the foreground the steel sculpture “Homage to Franz Marc” by Alf Lechner
→ Main article : List of architectural monuments in Kochel am See

→ Main article : List of ground monuments in Kochel am See

The Kochelseebahn from Munich ends in Kochel . It is served every hour by regional trains from Munich via Tutzing to Kochel, some of which run every half hour during rush hour. There is a connection to the long-distance network of Deutsche Bahn via Munich Central Station . The federal road 11 runs through the village, and the state road to Murnau connects to the A 95 . 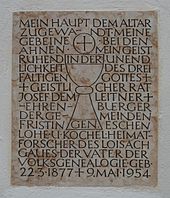