The title of this article is ambiguous. For the asteroid of the same name, see (18520) Wolfratshausen . 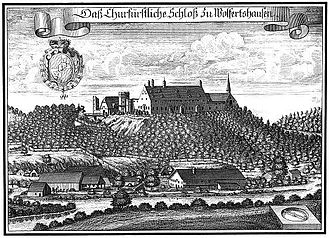 Wolfratshausen on a picture postcard from 1897 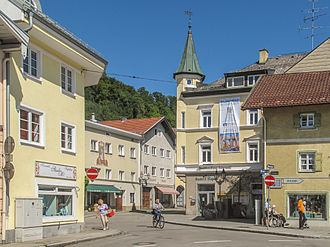 Street: Berggasse-Obermarkt (approx. 2012) after the conversion to a one-way street

Wolfratshausen belongs to the Bavarian Oberland region and lies in the river valleys of Loisach and Isar . The Loisach flows into the Isar (so-called Isarspitz) immediately north of the city in the Pupplinger Au area . The state capital Munich is about 30 kilometers north.

The urban area borders directly on the neighboring town of Geretsried to the south . This results in a common economic area with over 40,000 inhabitants or a common medium-sized center in the Oberland planning region .

The municipality has four officially named municipal parts (the type of settlement is given in brackets ):

There is also the Farchet settlement , which is not an officially named part of the municipality.

Wolfratshausen was first mentioned as "Wolueradeshusun" in a document from King Heinrich II dated June 30, 1003 at the court of Regensburg in connection with the delimitation of a hunting area. The Wolfratshauser castle was built in 1116 by the Earl of Wolfratshausen , a branch of the Dießen-Andechs counts built. Wolfratshausen was first referred to as a market in 1280 . From the 12th century rafts from Wolfratshausen set off for Munich. Mainly building materials were transported. Wolfratshausen has been the seat of a regional court since the 13th century . The castle had meanwhile become an important residence for the Wittelsbach family. Duke Rudolf in particular was often in Wolfratshausen until 1315, his three sons, the later Count Palatine and Electors of the Palatinate, were born here. Duke Ernst also resided here for years during the unrest in Munich around 1400, so that his son Albrecht III. was born in Wolfratshausen.

In 1632 - during the Thirty Years' War - the Swedes broke into Wolfratshausen, set many buildings (including the church) on fire and killed numerous residents. In 1634, Spanish soldiers brought the plague to Wolfratshausen, which again killed numerous residents. In the baroque period there was a productive sculpture school in the market, which was overshadowed by the Weilheimers; their best-known representative was Lukas Herle , who also worked as an altar carpenter. On April 7, 1734, the explosion of more than 17 tons of powder destroyed the castle after a lightning strike in the powder tower. The stones from the ruin were used to build the Munich Residence and many Wolfratshausen houses. 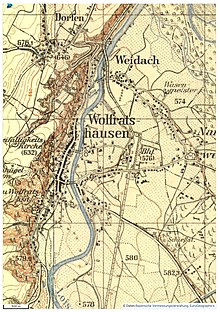 Wolfratshausen on map from 1933

The raft trip reached its peak in 1848 with about 5800 rafts annually. In 1853 Wolfratshausen experienced the greatest flood in its history. The TSV Wolfratshausen, the oldest sports club in Altlandkreis, was founded in 1864, the Wolfratshausen volunteer fire brigade in 1865. In 1870/71, five Wolfratshausen members died in the Franco-German War. In 1874 the Obermarkt burned down. Numerous buildings between the "Peterbäck" and the Gasthaus zur Post were destroyed by flames. On July 27, 1891, the Isar Valley Railway started operating and transported people and freight to and from Munich. In 1894 electricity was introduced when the old box mill was converted into a hydroelectric power station .

In 1901 the Pupplinger Au was placed under nature protection. In 1902 Wolfratshausen got its district office (old name for district office) back after it had been administered from Munich from 1862 onwards. In 1911 the expansion of the state road on Wolfratshauser Berg began. A moderate earthquake caused damage. During the First World War, which broke out in 1914, 85 Wolfratshausers lost their lives at the front. Due to the increasing motorization and the associated increase in traffic, the municipal council decided to waive the paving duty from January 1, 1920 . The Loisach-Isar Canal was completed in 1924. In 1928, the time of the floods was finally over. The Loisach has been straightened and the new upper Loisach Bridge opened to traffic.

In 1933 the National Socialists took over the Wolfratshausen town hall. At least until the November pogroms of 1938, a purely Jewish housekeeping women’s technical school could continue to exist in a Wilhelminian style villa. But then the pupils had to leave the site within two hours, the school was cleared and demolished after the war. In 1937 the construction of an explosives factory and accommodation for German workers and foreign forced laborers began in the Wolfratshausen state forest. After the war, one of these camps, the former Föhrenwald camp , became a camp for so-called displaced persons , and in 1957 the Waldram district . Over the years, the town of Geretsried (Gerolzried) was built on the extensive grounds in the state forest . Except for the demolition of the upper Loisach Bridge in 1945, Wolfratshausen was spared serious damage in both world wars. The market was handed over to the Americans without a fight. However, 160 Wolfratshausers lost their lives in the Second World War. Shortly before the end of the war, concentration camp prisoners were driven through Wolfratshausen. Many monuments along the route remind of the misery train.

On January 25, 1946, a local government was democratically elected in the first local elections after the Nazi dictatorship. In 1961 the previous market was elevated to a town. In 1962, the new Waldram elementary and secondary school was built. The new district hospital was inaugurated in 1966. On July 1, 1972, in the course of the regional reform , the former Bad Tölz and Wolfratshausen districts became the new Bad Tölz district, which was renamed the Bad Tölz-Wolfratshausen district on May 1, 1973. In 1972 the S-Bahn went to Loisachstadt for the first time. On May 1, 1978, the previously independent community Weidach was incorporated.

The Loisachhalle cultural center was inaugurated in 1980. 20 years later it was closed due to construction defects and insufficient fire protection. In 1989, the then Bavarian Minister of the Interior, Edmund Stoiber, laid the foundation stone for the new, 142-meter-long Marienbrücke bridge, which cost approx . A major financial scandal hit Wolfratshausen in 1994. Officials from the Oberfinanzdirektion and the public prosecutor's office searched the Wolfratshausen tax office after an anonymous report. Four officers were arrested.

On January 11, 2002, Edmund Stoiber and Angela Merkel met for the “ Wolfratshauser Breakfast ”, during which the so-called K question was decided. In 2003, on the occasion of the 1000th anniversary of the city, the citizens of the city of Iruma gave her the Japanese garden "Yūkō Nihon Teien", which means "Japanese garden of friendship", for a permanent and long-lasting friendship. . In August 2005 the market became a one-way street. After lengthy financing negotiations , the Loisachhalle was modernized and put back into operation in July 2009.

The city council election on March 15, 2020 led to the following distribution of seats based on the result shown on the right:

In the European elections , the turnout is significantly lower, similar to the national average: In the election on June 13, 2004 , it was 44.1%. Here, too, the strongest party was the CSU with 57.5%. 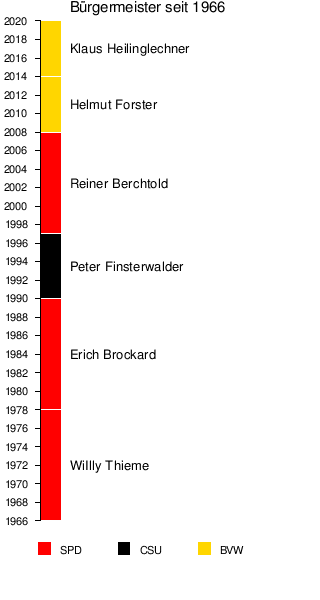 Blazon : "In silver a soaring, red-armored and red-tongued black wolf ."

The wolf in the city's coat of arms has been Wolfratshausen's heraldic animal since the beginning of the 15th century . Over the centuries he is said to have been depicted as a fox every now and then . The name of the city is probably derived from the name "Wolfrat". Initially the name was Wolveradeshusun .

The largest employer in Wolfratshausen is EagleBurgmann Germany GmbH & Co. KG with more than 5000 employees, more than 1000 of them in the Wolfratshausen and Eurasburg plants. It was founded by Feodor Burgmann in Dresden in 1884 under the name “Feodor Burgmann Handelsgesellschaft in Technische Artikel”. In 1951 the company headquarters was relocated to Wolfratshausen. The pillar of the business is the manufacture and sale of mechanical seals . Since March 2004, Burgmann has been one of ten operationally independent Freudenberg Business Groups and, together with Eagle Industry, Japan, forms a global alliance (EagleBurgmann) for sealing technology.

Wolfratshausen is the headquarters of the chemical company TUNAP .

In Wolfratshausen there was also a furniture store of the Möbel Mahler trading company with almost 40,000 m² of sales area. Since October 2018, the previously empty sales areas have been operated as a furniture store again by the Austrian furniture giants XXXLutz and Mömax.

Many Isar raft trips to Munich start in Wolfratshausen, in the picture still on the Loisach. In the season from May 1st to mid-August the rafts leave daily.

The federal road 11 runs through Wolfratshausen and particularly pollutes the old town with a high volume of traffic. Since August 13, 2005, in the course of a test phase, the old town has only been allowed to be driven south in order to equalize traffic and support the old town retail trade. Northern traffic will be diverted via Bahnhofstrasse.

The Wolfratshausen railway station is the terminus of line S7, the Munich S-Bahn that a section of the former Isartalbahn that from Munich to Bichl used led. The Munich Central Station is reached in about 40 minutes, the Munich Airport in about 90 minutes. The station is also used for freight traffic, in particular by Tyczka, a Geretsried-based company for liquefied gas production and energy supply. Wolfratshauser Bahnhof is also a central bus station for the surrounding area. In addition to regional bus routes from Upper Bavaria , which provide connections to the individual districts and the surrounding communities, city bus routes also operate from here. Car sharing vehicles are available at the train station .

The S7 is to be extended to Geretsried . A cost-benefit analysis yielded a factor of 1.09, although this is based on a barrier solution on Sauerlacher Strasse that Wolfratshausen did not want. Instead, a railway crossing under this state road is required. For reasons of cost, the S-Bahn route will probably run via Geretsried-Gelting. After submitting the plan approval documents in December 2011 by DB Projektbau to the Federal Railway Authority, construction is expected to start around 2024 and not to be completed before the end of 2028.