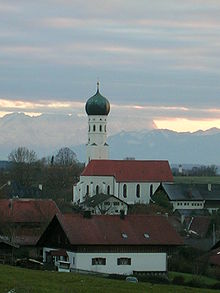 Münsing in front of the panorama of the Zugspitze

Münsing is a municipality in the Upper Bavarian district of Bad Tölz-Wolfratshausen on Lake Starnberg . Its municipal area extends from the shore of Lake Starnberg to the Münsinger Ridge, which rises between the lake and the Isar valley , and also includes the western Tischberg , which forms the southern crest of the ridge.

The municipality has 24 officially named municipal parts (the type of settlement is given in brackets ):

Barrow at the "Biber"

Münsing was founded around 550 by an elder named "Munigis". In the course of time the name changed via Munigisingen to the current name. Münsing was later part of the closed Hofmark Ammerland of the Counts of Baumgarten. The municipality became an independent political municipality in 1818 as part of the administrative reforms in the Kingdom of Bavaria .

On May 1, 1978, the previously independent community of Holzhausen am Starnberger See and part of the dissolved community of Degerndorf were incorporated.

After the last local election on March 16, 2014 , the local council has 17 members. The turnout was 62.4%. The choice brought the following result:

The description of the coat of arms reads: Divided over silver waves of red and blue, on top of each other a golden heraldic lily and diagonally crossed a golden key and a golden sword.

There is no train station in the community today. In the Degerndorf district there was a train station of the former Isar Valley Railway from Munich to Bichl until 1972 . The A 95 runs near Münsing and offers a quick connection to Munich . There is a landing stage for the Bayerische Seenschifffahrt in Ambach. There are also buses to Starnberg, Wolfratshausen and Seeshaupt.

In addition to a primary school in Münsing, there are also three kindergartens in the municipality, which are located in Holzhausen (church), Degerndorf (communal) and Ammerland (private).

The Münsinger ox race traditionally takes place in Münsing every four years, most recently in 2016 .