The Starnberger See (until 1962: Würmsee ) is a lake in Bavaria , 25 kilometers southwest of Munich . The lake is the fifth largest lake in Germany after Lake Constance , Müritz , Chiemsee and Schweriner See , but due to its great average depth, it is the second most water-rich. It forms the municipality-free area of the same name Starnberger See in the Starnberg district . The lake is owned by the Free State of Bavaria, for whose administration the Bavarian Administration of State Palaces, Gardens and Lakes is responsible.

The lake also became famous beyond Bavaria through the scandalous death of King Ludwig II by drowning in 1886 . A votive chapel and a wooden cross in the lake near the place of death in Berg still commemorate this event .

The following municipalities have a share of the lake shore (clockwise, starting in the north):

In front of the western bank, south of Possenhofen, lies a small island, the Rose Island .

The earliest naming of the lake as Uuirmseo can be found in a document from 818, which refers to Holzhausen am Würmsee. Later it became Wirmsee , for example in an early source from the time of Emperor Ludwig of Bavaria (1314–1347). The name is derived from the river Wirm (today Würm ), which is the only river flowing out of the lake near Starnberg. In the 19th century the spelling of the two bodies of water changed to Würm and Würmsee . Only since 1962 has the lake officially been called Starnberger See , this name began to gain more and more acceptance from the end of the 19th century when the lake was for a large number of people with the construction of a railway line from the former "Starnberg wing station" in Munich main station was reached by townspeople as an excursion destination. The lake is also known as the Fürstensee . 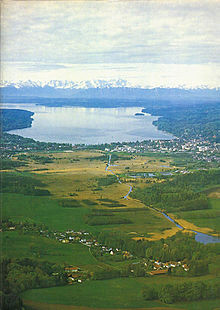 In the foreground the draining Würm, view of Starnberg and the lake to the south

The lake basin was pushed out by the Isar-Loisach glacier during the Ice Ages . During the last, the Würm Ice Age , the glacier reached from the south to the northern end of the lake, so that the lake basin was excavated in its current form. Important for the preservation of the lake basin was the fact that when the glacier melted back, most of the meltwater followed the current courses of the Loisach and Isar, so that the Starnberger See area was hardly buried. At the end of the last ice age, the last meltwater that ran off formed the Würmtal , the northernmost part of the lake basin has since silted up and forms the Leutstettener Moos today . Lateral and terminal moraines formed at the edges of the glacier tongue , between the basin of Lake Starnberg and the Ammersee in the basin of the second main tongue, the Eberfinger Drumlinfeld formed in the south and then the Andechser ridges to the north . There are numerous vantage points on the side and end moraines such as the Ilkahöhe in Tutzing or the Bismarck Tower near Assenhausen .

Due to its size, the lake cools down slowly and warms up just as slowly, which is why, like Lake Constance, it only mixes once a year in spring; such lake types are referred to as monomictic . It has no alpine tributary, which is astonishing in view of its geographical location, but can be explained by the altitude, and is only fed by several rather smaller surface rivers and a few underground springs. Its catchment area has an area of ​​314 square kilometers.

The Starnberger See receives the largest amounts of water from the Ostersee-Ach in the south, into which the Bodenbach still flows 500 meters before its mouth . The Singerbach flows 500 meters further east . The Georgenbach (Maisinger Bach, 450 meters west of the Würm discharge) and the Lüßbach (170 meters east of the Würm discharge) flow into the north . On the west bank, the Rötlbach (south of Tutzing, flowing into the Karpfenwinkel) is the most important tributary. Further tributaries in the west are Starzenbach (near Pöcking), Martelsgraben ( Kalkgraben ) in Tutzing and Seeseitenbach (1500 meters north of Seeshaupt). In the East lead Grenzgraben (at Ambach) and Eichgraben and Strasbourg digging further south. Other insignificant tributaries are mostly unnamed.

The low inflow is offset by the low outflow over the Würm through the Leutstettener Moos and the Mühltal . Because of the few tributaries, it takes around 21 years for the lake to exchange its water, and with its small catchment area of ​​around 315 square kilometers, the lake level fluctuates only slightly. While the strong alpine tributaries, for example on the neighboring Ammersee or on the Chiemsee, cause the water level to fluctuate by up to three meters, the fluctuation on Lake Starnberg is significantly lower at a maximum of 1.3 meters. The highest lake level measured so far occurred in August 2010 as a result of numerous precipitation events at 585.03  m above sea level. NN on. On Whitsun 1999, the last several days of continuous rain with a daily rainfall that statistically appears less than once in a hundred years, the level in just 36 hours by 40 centimeters to 584.96  m above sea level. Let rise above sea ​​level , around 14 million cubic meters of water were stored. As an “unregulated reservoir”, the lake is able to hold back large amounts of water, thus protecting the Würmtal communities from extreme floods. On the other hand, the slow exchange of water in the currently mesotrophic lake makes it particularly susceptible to pollution.

Since the 1960s, the sewage of the neighboring communities has been kept away from the lake via ring canals , so that the nutrient load and the water quality have improved significantly in the long term. Today the lake is one of the five cleanest larger lakes in Bavaria, it has a high level of transparency and little algae development.

Barnacle geese in their winter quarters at Lake Starnberg.

Since 1976, Lake Starnberg has been one of the wetlands of international importance protected by the Ramsar Convention . In order to ensure the diversity and uniqueness of the landscape of the lake, its shores and the adjacent steep moraine slopes , it was granted protection status in 1987 as the "Starnberger See and western adjoining areas" protection status .

As the body of water with the greatest abundance of water in Bavaria, the lake is of central importance for bird migration . In the autumn and winter months, 20,000 to 25,000 water birds rest or hibernate here. In contrast to this, in the spring and summer months the bank areas are also breeding areas for long-distance migrants , such as the common tern , whose winter quarters are in the southern hemisphere . Natura 2000 , the network of protected areas of the European Union, declared the lake a bird sanctuary in 2000 and an FFH area in 2004 .

The history of fishing on and in Lake Starnberg is as old as the settlement history of the lake area, around 3,000 years ago . At one of the oldest settlements in the area, on Rose Island , a bronze fish hook was discovered during archaeological excavations . The dugout canoes from Kempfenhausen from the 8th or 9th century BC were also found on the Roseninsel in 1989 . Angling and fishing with a net, both as a sport and to gain food, are still practiced privately and commercially on Lake Starnberg today. The best fishing grounds are around the undersea elevations and mountains. Most of the local fishermen have a long family tradition in their profession. They often still live in the historic courtyards along the shore, which in some cases bear the traditional guild signs with the year they were accepted into the guild .

While the earlier settlers could fish freely as needed, the Bavarian aristocratic houses had serfs fish for a fee from around 1000 AD. Later, the Bavarian dukes ceded their fishing rights to sovereigns or monasteries. The fish of the Bavarian lakes were the preferred food in the better houses next to game . The fishermen themselves benefited least from this system in which they did not always well support their hard and sometimes dangerous work.

It was common to divide the fish into "noble", "lesser" and "last fish ". White whitefish , lake trout and arctic char were considered to be nobler species, bream , pike , carp , rod and catfish as inferior. Whitefish and pike have long been valued as “bread fish” of the lake, and because of their abundance they were a common staple food. The pike population was so decimated by a pike plague towards the end of the 18th century that it has not yet been able to regenerate. As a special delicacy, char was so popular that catch books were introduced.

The lake is an important recreational area, especially for Munich and the surrounding area, as it can be easily reached by train from a total of six stations along the west side or via the A 95 or A 952 .

For hikers and cyclists there is an approx. 49 km long circular route around the lake, which, with short exceptions, runs on field and forest paths as well as roads closed to motor vehicle traffic. About 20 kilometers of the lake shore are open to the public.

Between Niederpöcking and Possenhofen there is the Paradies-Badeplatz , the recreational area of ​​the state capital Munich, with sunbathing lawns, bathing jetties, barbecue areas, volleyball courts and a section of beach for windsurfers. There are also large swimming areas in Kempfenhausen and between Ambach and St. Heinrich. There are outdoor pools in Starnberg, Feldafing, Garatshausen , Bernried and Seeshaupt (Lido). A number of sailing and surfing schools are available, as are boat rentals.

The Bayerische Seenschifffahrt offers scheduled, round trips and special trips.

In addition to rowing (there are numerous clubs around the lake), sailing is a popular sport, even if Lake Starnberg is considered a low-wind area with occasional thunderstorms and changing winds. In theory, sailing is possible without a sailing license, but all boat rental companies and most sailing clubs require at least a sports boat license inland .

Sailboats shorter than 9.20 m and without a motor can be used for public use without a permit, whereby the local rules must be observed (e.g. distance to the shore, protected areas, right of way for passenger ships). There are public access ramps in Tutzing and Ammerland (without parking) and in the recreation area near Ambach.

Motor and electric boats as well as sailing boats with a length of more than 9.20 m or with an auxiliary engine over four kilowatts of power or with living, cooking or sanitary facilities require approval from the Starnberg District Office and a license plate as well as a license agreement under private law with the Bavarian Palace Administration . The same applies analogously to berths on buoys or jetties.

For motorboat permits on Lake Starnberg there is a fixed contingent of 255 private licenses and a reservation list with a waiting period of approx. 10 years.

Water skiing is possible on a certain area in the lake at certain times of the day.

Diving is permitted in Lake Starnberg within the framework of the general decree of the Starnberg District Office. The Allmannshauser steep face in the lake is remarkable, which drops very steeply to a depth of 70 m and then sinks further to the deepest point of the lake. It is the steepest and deepest underwater wall in German inland waters and therefore attracts many experienced divers. However, there are also fatal diving accidents here.