Feldafing is a municipality in the Upper Bavarian district of Starnberg . The place is at an altitude of 650  m above sea level. NHN on the west bank of Lake Starnberg and offers a panoramic view of the lake and part of the Alps .

There are four parts of the municipality (the type of settlement is given in brackets ):

Residents are the communities Tutzing in the south, Pöcking in the north and the unincorporated area of Lake Starnberg in the east.

Feldafing had belonged to Weilers Hofmark Garatshausen since 1565 , then came into the possession of Count La Rosée around 1760 . Thereafter, the place belonged to Duke Max Joseph in Bavaria , the father of the later Empress Elisabeth of Austria (Sissi). Feldafing was part of the closed Hofmark Garatshausen- Possenhofen of the Electorate of Bavaria . In the course of the administrative reforms in Bavaria , today's municipality was created with the municipal edict of 1818 .

The place became known through the offshore Rose Island and the Hotel Kaiserin Elisabeth . Both locations were popular places to stay for the Austrian Empress Sisi .

During the time of National Socialism, there was an elite school of the NSDAP in Feldafing : the Reichsschule Feldafing . A satellite camp of the Dachau concentration camp was set up on the associated site in 1942 , and a memorial in the Jewish cemetery commemorates its victims today .

After the end of the Second World War , Feldafing belonged to the American zone of occupation . The area of ​​the former Reichsschule with the barracks of the concentration camp was used by the military administration as a DP camp for Jewish so-called displaced persons , the DP camp Feldafing .

From 1950 to 1978 the private boarding school Institut Dr. Greite , a 13-grade high school for girls and boys that used six former villas .

Feldafing achieved nationwide fame in the 1990s when the writer and art collector Lothar-Günther Buchheim wanted to present part of his art collection to the public in Feldafing. However, the municipality and Buchheim could not agree on a common museum concept and so years of quarrels ended in a referendum against the museum plan. Buchheim then went to the Bernried community with his works of art .

On January 1, 1978, small areas of the dissolved Traubing municipality with then about 50 inhabitants were incorporated .

The first mayor is Bernhard Sontheim (citizens' group). He was elected to office in 2002 as the successor to Günter Gerhard (CSU / party-free). In the local election on March 15, 2020, he was re-elected with 52.70% of the vote.

The municipal council consists of the first mayor and 16 elected members. In the local elections on March 15, 2020, 2,146 of the 3,438 residents entitled to vote in the municipality of Feldafing exercised their right to vote, bringing the turnout to 62.42%.

Feldafing can boast a beautiful villa colony from the 19th century , including the Villa Carl , built in Art Nouveau by Richard Riemerschmid , or the Villa Waldberta , today the International Artists' House of the City of Munich . Another attraction is the Rose Island . The publicly accessible, elongated 18-hole golf course is located directly on the lake shore. The listed lido Feldafing , built in 1927 by Engelbert Knittl , exudes nostalgic charm.

According to official statistics, there were four employees at the place of work in the field of agriculture and forestry, 162 in the manufacturing sector and 57 in the trade and transport sector. In other economic sectors, 735 people were employed at the place of work subject to social insurance contributions. There were a total of 1,087 employees at the place of residence subject to social security contributions. There was one company in the manufacturing sector and two companies in the main construction sector. In addition, in 1999 there were eight farms with an agricultural area of ​​144 ha, 119 ha of which were permanent green space.

Important companies have settled in Feldafing, including a. also Siemens AG with its Global Leadership Center , located right next to the information technology school of the Bundeswehr .

At educational institutions there are u. a. the Otto-Bernheim primary school, three kindergartens and an international training center of the German Society for International Cooperation .

The Feldafing train station is in the twenty- or forty minute of trains the S-Bahn line 6 of the Munich S-Bahn operated, so there is a direct connection to Munich's city center and with change in station Tutzing after Garmisch-Partenkirchen . There is also the start of the autobahn from Starnberg in the direction of Munich. Feldafing can be reached from the B2 federal road via Pöcking , Traubing or the Wieling district . Coming from Tutzing or Possenhofen , Feldafing can be reached via the state road St2063, also called Seestraße by the locals .

From spring to autumn there is a weather-dependent passenger ferry to Roseninsel. 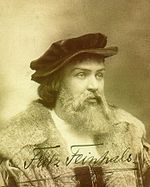 Karin Sommer: One day it will be a peaceful place again. Simon Schochet's experiences in the Feldafing refugee camp. (Radio broadcast on January 11, 1992 on Bayerischer Rundfunk )