Lothar-Günther Buchheim (born February 6, 1918 in Weimar ; † February 22, 2007 in Starnberg ) was a German painter , photographer , publisher , art book and novelist , filmmaker , collector and founder of the “ Buchheim Museum of Fantasy ” in Bernried at Lake Starnberg .

Lothar-Günther Buchheim was the son of the unmarried German painter Charlotte Buchheim (1891–1964) who lived in Chemnitz . He had a brother, Klaus Buchheim, who was two years his junior.

In 1926 he moved with his family to Rochlitz , where he spent the rest of his childhood, because his mother had married an ore foundry owner, but in 1930 she moved back to Chemnitz . Here he made long bike rides with his brother, sometimes as far as the Baltic Sea , to draw landscape pictures and later to convert them into linocuts . During this time he created his first linocut works. Buchheim was called a “painting prodigy” very early on and has already worked on newspapers and magazines as well as on collective exhibitions. At the age of 17 he got his first public contract from the city of Chemnitz. During this time he published the volume "Lothar-Günther Buchheim - A very young artist".

After graduating from high school in 1937, he moved to Italy , where he wrote his first book Days and Nights Going Out of the Stream (published in 1941). In this work he gathered all the experiences he had made during a 1938 Danube trip with a folding boat into the Black Sea .

In 1940 Buchheim joined the Navy as a volunteer and served as a war correspondent for the national socialist prestigious newspaper Das Reich on mine clearing boats , destroyers and submarines , most recently in the rank of first lieutenant .

During and after World War II he wrote numerous books about his experience in the Navy . In 1943, as a member of the crew of the VII-C boat U 96, he wrote his experience report Jäger im Weltmeer , which deals with a bitter battle between a German submarine and a British destroyer. It became the basis for the book and film Das Boot . In August 1944, Buchheim escaped from the Brest fortress with U 309 . Then he fled across France and returned to Germany. He processed this evacuation trip in the novel The Fortress .

He portrayed Admiral Karl Dönitz twice. Between 1941 and 1943 he took part in the Great German Art Exhibition in Munich with a total of 21 drawings - portraits of officers and depictions of submarines - and was numerically one of the best represented artists at this exhibition of the " Third Reich ".

In 1945 he founded the “handicraft workshops” in Feldafing, where he had now settled. After the end of the war he wrote art books about Max Beckmann , Otto Mueller and Pablo Picasso , which, together with his books about experiences from the Second World War , made him known. In 1949, his only son Yves Buchheim was born to the French Geneviève Militon. Buchheim founded an art book publisher in Frankfurt am Main in 1951 , which is now in Feldafing and which he ran together with his wife Diethild (1922–2014) and their two sisters.

In the 1950s his collection of graphic works of German Expressionism (especially the artist community Die Brücke ) was created. Since the value of this art was not yet widely recognized, he was able to purchase the works at a low price.

In 1968 he resumed work on the submarine manuscript and in 1971 finished the novel under the title "Das Boot". The film adaptation of the novel Das Boot in 1981 ensured the further fame of its author. Together with the novel “The Fortress”, published in 1995, and the novel “Der Abschied”, published in 2000, this work forms a trilogy.

In 1972 Buchheim made a painter's journey through New York and San Francisco to the South Pacific . During this trip he created many watercolors and gouaches , which he later called the tropics of Feldafing .

In the 1960s and 1970s he undertook numerous painting and exploration trips, which resulted in several travel reports and photo books. From 1981 to 1985, much of his work was exhibited in Leningrad, Moscow, Madrid, Tel Aviv and Japan.

After Lothar-Günther Buchheim had finished painting and writing for the public at the age of 65, he first wanted to put his collected works in the Duisburg Lehmbruck Museum . Since this project failed because of differences of opinion with the city of Duisburg , he withdrew his offer in the mid-1980s. In 1996 he founded a non-profit Buchheim Foundation, which financed the Museum of Fantasy , also known as the Buchheim Museum , in 2001 after around 30 years of efforts . The museum opened on May 23, 2001. In this museum, in which Buchheim was director until his death, he placed his collected works.

For years, Buchheim had planned to store his collection, estimated at around 100 million euros, in his place of residence in Feldafing . But the community refused after quarrels with him, who was also dubbed "Poltergeist von Feldafing". In 1998 a referendum brought the final end to his museum plans in Feldafing and Buchheim moved to the neighboring community of Bernried.

His eye patch, which he wore over his left eye due to a failed eye operation, was characteristic.

Lothar-Günther Buchheim died on February 22, 2007 of a heart condition. His urn was buried in the Bernried cemetery. 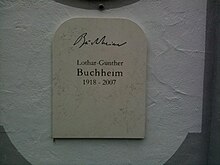