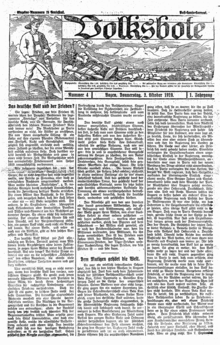 One of the first editions of the Volksbote edited by Michael Gamper , No. 4 of October 2, 1919

The Athesia is a printing and publishing group based in Bolzano in South Tyrol . Among other things, it publishes the two local daily newspapers with the highest circulation, Dolomiten and Alto Adige . The shares of the Holding Verlagsanstalt Athesia AG , which also controls various companies in sectors outside of the core business, are majority owned by the Bozen family Ebner and the diocese of Bozen-Brixen . 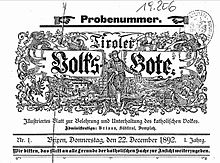 Head of the first edition of the Tiroler Volksbote from December 22nd, 1892

The former politician and entrepreneur Michl Ebner is the head of the entire group and several subsidiaries; his brother Toni Ebner is editor-in-chief of the Dolomites . Dean Alois Müller has held the office of President of Athesia-Verlagsanstalt since June 10, 2011 . Michl Ebner is Vice President.

In 1889 the Catholic-Political Press Association was founded in Brixen , which from 1892 published the successful mass newspaper Tiroler Volksbote .

In 1899 the Tyrolia Press Association was founded in Bozen to publish the newspaper Der Tiroler . The aim was to establish a high-circulation paper in the Bolzano area similar to the Catholic-conservative papers Brixener Chronik and Tiroler Volksbote, which were successful in the Brixen area. After an advertising copy for Christmas 1899, Der Tiroler appeared regularly from January 2, 1900.

In 1907 the two press associations from Brixen and Bozen merged to form the publishing house Tyrolia GmbH . On the day it was founded on November 27, 1907, the company had printing works in Bressanone, Bozen and Innsbruck as well as a book and paper shop in Bozen, Brixen, Sterzing and Innsbruck. It appeared the Brixener Chronicle (three times weekly), the Tyrolean Volksbote (14-day), the Tyrolean (three times a week in Bolzano), the Tyrolean farmers' newspaper (14-day) and as Tagblatt in Innsbruck the Tiroler Anzeiger . The founder was the Catholic priest and politician Ämilian Schöpfer , who was President of Tyrolia Verlag until his death in 1936.

Headline of the Dolomites of October 29, 1932 with open homage to the 10th anniversary of Mussolini's reign

Advertisement for the Vogelweider bookstores and the Bozner Verlag in the National Socialist Bozner Tagblatt dated December 24, 1943

As a result of Benito Mussolini's seizure of power in October 1922, the company suffered from the systematic erasure of German cultural assets in South Tyrol, which was primarily driven by Ettore Tolomei , the so-called gravedigger of South Tyrol . Since the name Tyrol and all its derivations were forbidden, the company had to rename itself and initially chose the name Vogelweider , the first letter of which still defines the company's logo today. When all German-sounding names were banned, they turned to Athesia , derived from the Latin name of the river Etsch (Latin Athesis ). The Innsbruck group in Austria continues to operate as Tyrolia . The newspaper Der Tiroler , published by Athesia, had to be renamed Der Landsmann and was then temporarily shut down. From 1926 onwards, the paper was able to reappear under the new name Dolomiten - in complete contrast to the other German-speaking competitors in the South Tyrolean newspaper market, who remained banned - but at the price of regime-friendly reporting. In 1943 the newspaper was closed by the National Socialists, but the bookstores and the publishing house remained in full operation.

From May 19, 1945, the daily newspaper Dolomiten , now with the subtitle “Tagblatt der Südtiroler”, was able to appear regularly again thanks to an Allied permit.

In 1966 a new publishing house was built in the Bolzano industrial area, which was later expanded several times. In 1989 an Octoman web offset press was purchased, in 1990 a 64-page newspaper rotary press, and from 2012 a Colorman XXL rotary press.

The Athesia Group is made up of various companies that are  controlled by the Holding Verlagsanstalt Athesia AG. For decades the group concentrated on the areas of media, book trade, publishing and printing, and since the 1990s the business areas have been increasingly diversified.

The Athesiadruck  GmbH publishes several periodicals (including the Dolomites , the Zett , a number of magazines such as the Catholic Sunday paper , the South Tyrolean issue of rhyme Michl folk calendar and the monthly magazine The Schlern ), books and news site Alto Online (stol.it) . In 2016, Athesia bought a majority stake in the SETA printing cooperative , which publishes the Italian-language daily newspapers Alto Adige and Trentino , and in 2018 the group took over the largest Trentino daily newspaper, l'Adige . The media portfolio also includes the radio stations Südtirol 1 , Radio Tirol , Tele Radio Vinschgau and Radio Dolomiti, as well as the websites Südtirol News , kultur.bz.it , second-hand.it and sportnews.bz via subcontractors . Athesia Buch  GmbH ( book stores and stationery) and a number of smaller publishers (including Athesia Kalenderverlag and Ferrari-Auer ) are also active in the traditional core business .

The company FirstAvenue rents advertising space at South Tyrolean bus stops, advertises own products, advertises in South Tyrolean cinemas and operates websites such as sentres.com , cippy.it , suedtirol.live and shopping.st . With the Brennercom the Athesia in the telecommunications sector is active on the Athesia Energy in the energy sector. Another entrepreneurial focus is on tourism . The Alpina Tourdolomit and aveo tours operating in the travel industry. In 2011, Athesia acquired the Hotel Therme Meran with a bidding consortium . In 2014 the group (until 2018 in association with the Innsbruck entrepreneur family Schröcksnadel) took over the majority of the shares in the Schnalstal Glacier Railway .

The monopoly-like position of the Athesia publishing group in the South Tyrolean media system is often criticized. Above all, the amalgamation with parts of the South Tyrolean People's Party , the close ties to the diocese of Bozen-Brixen and the dominant position of the owner family Ebner, who are also politically and administratively involved, led to controlled reporting. The takeover of the two most important daily newspapers in Trentino from 2017 led to similar critical comments there. In 2018, the national supervisory authority for communications found a problematic concentration of media in Trentino-Alto Adige in the hands of the Athesia group.