This article deals with the painter Otto Mueller. For other people see Otto Müller . 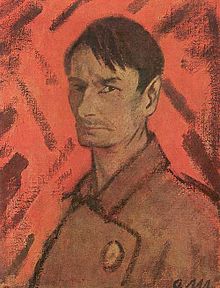 Otto Mueller (* 16th October 1874 in Liebau , district Landeshut , province of Silesia ; † 24. September 1930 in Obernigk , district Trebnitz ) was a German painter and lithographer of Expressionism . He belonged to the artist group Brücke and is considered one of the most important expressionists today.

Otto Mueller was born as the son of a lieutenant and later tax advisor in what was then Prussian Silesia. He spent his youth in Görlitz . He had to leave high school without a degree.

From 1890 to 1894, at the request of his father, he completed an apprenticeship in lithography, followed by studies at the Dresden Art Academy until 1896 , for which he had received special permission, but where there were soon differences with his teacher Hermann Freye because he whose corrections did not want to tolerate.

From 1898 he continued his studies at the Royal Academy of Fine Arts in Munich , but could not continue them in 1899 because the director of the academy, Franz von Stuck, refused his approval.

In 1905 he married Maria ("Maschka") Mayerhofer (or Meyerhofer), who often served as his model and who remained his confidante even after the separation and two other marriages concluded by Mueller.

Ernst Ludwig Kirchner : Portrait of Otto Mueller with a pipe , 1917

In 1908 he moved to Berlin . His model was sculptures by Wilhelm Lehmbruck , with whom he was friends; Since 1908 he has been painting the slim girl figures that are characteristic of him as well as the glue paints that he used with preference for his works. He tried in vain to join the Berlin Secession , and in 1910, together with other rejected artists, he founded the Neue Secession group , which held an exhibition in May under the motto “Rejected from the Berlin Secession 1910”. Through this he came into contact with members of the bridge and worked with this artist community from 1910 until it was dissolved in May 1913. Mueller, who was very similar in style to the other Brücke artists, preferred a subdued color scheme with a lyrical, decorative effect.

In 1915 he was drafted for military service in World War I and took part in battles in France and Russia as a soldier in the infantry. In 1917 he contracted pneumonia that almost cost him his life.

From 1919 he was a professor at the State Academy of Arts and Crafts in Wroclaw . He rejected any bourgeois adaptation and was part of the circle of the "Breslau artist bohemians". His wife Maschka divorced him in 1921 and returned to Berlin.

His gypsy portfolio with nine color lithographs from 1927 was the highlight of his work. He had visited Spalato and Sarajevo , as reported by his sister Emmy, where he was taken in by the gypsies and lived among them like one of their own. The pictures that were taken in Mueller's last three years from 1927 to 1930 also bear witness to Mueller's most artistic phase.

In 1930 Mueller died of pulmonary tuberculosis at the Obernigk pulmonary clinic near Breslau at the age of 55 .

In 1937, the National Socialists confiscated 357 of his works from German museums because his pictures were considered degenerate art . 13 of them were defamed in the exhibition “Degenerate Art” .

The central theme in Mueller's work is the unity of man and nature, which he tries to express in numerous nudes in landscapes. In these pictures Mueller repeatedly depicts scenes from gypsy life.

Some of his works were shown posthumously at documenta 1 in Kassel in 1955 .

Otto Mueller was a board member of the first German Artists Association . Among his students were the Bauhaus members Emil Bartoschek and Walter Kalot .

Many works by the artists of the Breslau Academy are in the holdings of the Silesian Museum in Görlitz . They could be acquired from an important private collection.