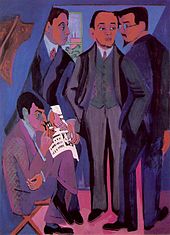 Karl Schmidt-Rottluff (born December 1, 1884 in Rottluff (now a district of Chemnitz ), † August 10, 1976 in Berlin ; actually Karl Schmidt ) was a German painter , graphic artist and sculptor . He is considered a classic of modernism and one of the most important representatives of Expressionism .

Schmidt's father was the mill owner Friedrich Schmidt. Karl Schmidt was born in the residential building of the mill in Rottluff near Chemnitz ( Saxony ) and has been called Schmidt-Rottluff since 1905. From 1905 to 1906 he studied architecture at the Technical University of Dresden .

On June 7, 1905, the artist group Brücke was founded in Dresden by the architecture students Schmidt-Rottluff, Ernst Ludwig Kirchner , Fritz Bleyl and Erich Heckel . In November, the Brücke's first exhibition followed in an art dealership in Leipzig. In 1907 the Hamburg art historian Rosa Schapire asked for admission as a passive member. Schmidt-Rottluff, whom she held in high esteem, painted portraits of her in 1911, 1915 and 1919. The painter Max Pechstein , who was the only one of the group to be fully trained, joined the group, but was excluded when it turned out that he was also a member of the Berlin Secession . In 1913 the bridge dissolved.

In 1910 Schmidt-Rottluff took part in the exhibitions of the New Secession in Berlin, in 1912 in the second exhibition of the Blue Rider in Munich and in the Sonderbund exhibition in Cologne. In 1914, one year after the "Brücke" was dissolved, he became a member of the Free Secession in Berlin and had his first solo exhibition there. During the First World War he was a reinforcement soldier in Lithuania and Russia from 1915 to 1918.

After the end of the war, he married Emy Frisch in 1919 . Along with Rosa Schapire and Wilhelm Niemeyer , he designed the expressionist publication The red earth and 1920/21, the magazine for art promulgation .

At first, Schmidt-Rottluff's work was clearly influenced by Impressionism . North German and Scandinavian landscapes often appear as motifs. In 1911 the painter moved from Dresden to Berlin. Geometric forms thus took up more space in his work, from 1923 round, curved forms. In 1931 Karl Schmidt-Rottluff was appointed as a member of the Prussian Academy of the Arts , from which he was, however, forced to resign two years later by Max von Schillings . In 1932 he moved to Rumbke am Lebasee in Western Pomerania .

Prohibition and destruction of images

The Blue House by Hanna Bekker vom Rath , Kapellenstr. 11 in Hofheim am Taunus , Schmidt-Rottluff's annual vacation and work domicile from 1932 to 1972

As a member of the Deutscher Künstlerbund since 1927 (from 1928 on the inner board, then also a member of the jury) Karl Schmidt Rottluff took part in the last DKB annual exhibition in 1936 at the Hamburger Kunstverein . Two oil paintings were shown: Snowy Stream and Evening by the Stream (1932; 91 × 124 cm). In 1937 Schmidt-Rottluff's works (608 works) were confiscated as “ Degenerate Art ” in German museums , and some of them were then shown in the “Degenerate Art” exhibition. When the painting was burned on March 20, 1939 in the courtyard of the main fire station in Berlin , several of his works were destroyed. In 1941 he was expelled from the professional association and was banned from painting.

In September 1942 Schmidt-Rottluff was a guest of Helmuth James Graf von Moltke at Kreisau Castle in Kreisau in Lower Silesia. There he painted - despite the painting ban imposed on him in 1941 - numerous landscapes, in particular the view over the park and the arable land to the mountain Zobten . Only a few of these watercolors that were given to friends have been preserved; the others were destroyed in 1945. From 1943 to 1946 Schmidt-Rottluff retired to Chemnitz. The Berlin apartment and studio were destroyed by bombing and he moved to Chemnitz-Rottluff.

In 1947 he was appointed professor at the University of Fine Arts in Berlin-Charlottenburg . Schmidt-Rottluff was the second chairman of the board of the re-established German Artists Association in 1950 . Between 1951 and 1976 he took part in its annual exhibitions five times. In 1955, Karl Schmidt-Rottluff was a participant in documenta 1 in Kassel .

In the GDR, the works of Karl Schmidt-Rottluff, like those of the other Expressionists, got caught up in the formalism debate determined by the ideology of socialist realism from the end of the 1940s . His pictures were rarely bought and there were only very few exhibitions in the GDR in the decades up to 1982.

After his retirement from the Academy of Fine Arts in 1954, the artist often stayed in Hofheim am Taunus , Lake Maggiore and the Baltic Sea .

Emy and Karl Schmidt-Rottluff died a few months apart in West Berlin in 1975 and 1976.

Schmidt-Rottluff was buried in the Dahlem Forest Cemetery in Berlin-Dahlem . The first director of the Brücke Museum gave the eulogy.

The grave is one of the honorary graves of the State of Berlin and is located in Dept. 10E-11/12.

Stays on the North / Baltic Sea

In the course of his life, Schmidt-Rottluff was drawn to the North and Baltic Seas again and again in summer. The pictures of the Baltic Sea landscape were created in bright colors and generous abstraction of the motifs. The stays were:

On his eightieth birthday in 1964, he made the proposal to build a bridge museum in Berlin. This has been put into practice. The museum in Berlin-Zehlendorf opened on September 15, 1967. Erich Heckel and he had given the house several works. Over 300 works by Karl Schmidt-Rottluff, including paintings, watercolors , drawings, postcards, woodcuts , etchings , lithographs , commercial graphics and sculptures, are kept in the Brücke Museum.

The collection of the Chemnitz art collections comprises a total of 490 works by the artist. This includes paintings, sculptures, works on paper and exhibits from the applied arts.

On May 6, 2015, the City Council of Chemnitz decided to rename the inner-city Kaßbergauffahrt bridge to Karl-Schmidt-Rottluff-Brücke. The occasion was the 110th anniversary of the artist group " Brücke ", which Schmidt-Rottluff co-founded .

As part of the series “ German Painting of the 20th Century ”, a 300-Pfennig special postage stamp was issued in 1995 by the Deutsche Bundespost with the motif Gutshof in Dangast .

Schmidt-Rottluff's works also include a few portraits, for example of the art historian Rosa Schapire, with whom he was close friends, and of Lyonel Feininger , another representative of Expressionism.