Lyonel Charles Adrian Feininger (born July 17, 1871 in New York ; † January 13, 1956 there ) was a German-American painter , graphic artist and caricaturist . From 1909 he was a member of the Berlin Secession . With his work at the Bauhaus since 1919, he is one of the most important artists of classical modernism .

Feininger only started painting at the age of 36. Before that he worked as a commercial cartoonist for various German, French and American newspapers and magazines. He subjected his work to a rigorous self-critical examination and, based on his caricatures, quickly developed a very distinctive painting style. In his pictures the objects are abstracted and artistically exaggerated. The strength achieved and the expression of Feininger's style influenced numerous contemporary artists and established its importance and success. Feininger often took up motifs and compositions of his own caricatures and sketches in his work .

For example, his drawings of the small town idyll, made in Ribnitz and Damgarten in 1905, have become famous , as are his pictures of churches and village centers in the Weimar region in Thuringia , where he repeatedly went for work and study stays between 1906 and 1937. The pictures are usually named and numbered after the respective localities ( Gelmeroda , Niedergrunstedt , Possendorf , Mellingen , Vollersroda , Tiefurt , Taubach , Gaberndorf , Oberweimar , Zottelstedt and others).

Leonell (Lyonel) Feininger was born as the son of two distinguished German musicians, the concert violinist Karl (later Charles) Feininger and the pianist and singer Elisabeth Feininger. In 1887, at the age of 16, Feininger came to Germany for the first time with his parents, who were on a concert tour. With their permission, he was allowed to stay there and attend the Hamburg School of Applied Arts . On October 1st of the following year, he passed the entrance exam for the Royal Academy in Berlin . He started drawing for publishers and magazines at an early age. In 1892 he began studying at the Académie Colarossi in Paris , founded by the Italian sculptor Filippo Colarossi. After seven months in Paris, he returned to Berlin in 1893, where he worked as a freelance illustrator and caricaturist for the magazines Harpers Young People , Humoristische Blätter , Ulk and Die Lustige Blätter .

In 1901 Feininger married the pianist Clara Fürst, a student of Artur Schnabel and sister of the painter Edmund Fürst . After he met the artist Julia Berg , née Lilienfeld (1881–1970), in 1905 , he separated from his wife Clara and his two daughters Leonore and Marianne. In February 1906 he visited Julia in Weimar , where she studied at the Grand Ducal Art School. Together they traveled to Paris in July, where their son Andreas (1906–1999) was born. In July 1906 Feininger met Robert Delaunay and Henri Matisse in Paris . He signed a contract with the Chicago Sunday Tribune for two comic series, The Kin-der-Kids and Wee Willie Winkie's World , which are now counted among the classics of the genre, but both were discontinued early. In 1908 Lyonel and Julia married and settled in Berlin. They had two other sons, Laurence (1909–1976) and Theodore Lux (1910–2011). In 1909 he became a member of the Berlin Secession .

In 1911 six paintings by Feininger were exhibited at the Paris Salon des Artistes Indépendants ("Salon of Independent Artists") on the Pont d'Alma. The first contact with cubism took place . In 1912, the painter got to know the artist group Brücke and produced his first architectural compositions. 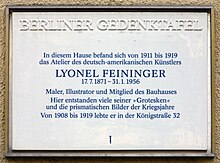 Memorial plaque on the house at Potsdamer Strasse 29, Berlin-Zehlendorf 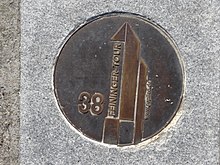 Together with the artists of the Blue Rider , he took part in the First German Autumn Salon in the Berlin gallery “Der Sturm” in 1913 at the invitation of Franz Marc . In 1914 Feininger made an etching and prepared artistic models of trains for industrial toy manufacturing. He also had an exhibition with u. a. Moritz Coschell in the Arnold Gallery in Dresden. After the outbreak of World War I , he returned to Berlin. Feininger's first solo exhibition opened on September 2, 1917 in the “Der Sturm” gallery. 45 paintings and 66 other works were shown. Another solo exhibition was shown by the Galerie Neue Kunst Hans Goltz in Munich in October 1918 . In November of the same year Feininger joined the November group initiated by Max Pechstein and César Klein and got to know Walter Gropius . In 1919 he was appointed by Gropius as head of the graphic workshop at the State Bauhaus in Weimar. In mid-August Feininger moved with his family to Gutenbergstrasse 16 in Weimar. Following the holistic approach of the Bauhaus, Feininger also devoted himself to music in 1921 and composed his first fugue .

Feininger liked to spend the summer months by the sea, initially alone on Rügen (from 1892), later with his wife Julia and their sons Andreas, Laurence and Theodore Lux on the island of Usedom , which he moved from quarters in Heringsdorf , Neppermin and from 1908 to 1921 Benz explored by bicycle and where he u. a. repeatedly painted the Benzer St. Petri Church , and from 1924 to 1935 in Deep on the Pomeranian Baltic Sea coast near Kolberg. During his stays at the sea he made many sketches ("nature notes"), the motifs of which he repeatedly used in later work.

Feininger cycle paths both around Weimar and on Usedom follow in the artist's footsteps.

As part of the series “German Painting of the 20th Century”, Deutsche Post issued a special stamp in 2002 with the painting “Market Church of Halle” by Feininger.

Feininger at the Bauhaus, involuntary end of his work in Germany

Galka Scheyer , the “prophet of the Blue Four”, with Lyonel Feininger, Wassily Kandinsky, Paul Klee and Alexej Jawlensky, collage on a newspaper page of the San Francisco Examiner from November 1, 1925

Feininger was appointed as the first Bauhaus master by Walter Gropius to Weimar in 1919 to found the State Bauhaus . Initially he was the head of the printing workshops until 1925. Feininger lived with his family from summer 1919 to summer 1926 at Gutenbergstrasse 16 in Weimar, a house that has been preserved to this day. In 1921, a portfolio with linocuts by Feininger was published as his first Bauhaus publication. Feininger stayed in Erfurt in 1923 . In New York, 47 paintings, watercolors, drawings and prints were exhibited in the Anderson Gallery: A Collection of Modern German Art . In 1924 Feininger, Paul Klee , Wassily Kandinsky and Alexej von Jawlensky founded the exhibition group Die Blaue Vier . After the Bauhaus in Weimar was closed in 1925 as a result of submissions from the Thuringian craftsmen and the German-ethnic bloc in the Thuringian state parliament, it was re-established in Dessau in 1926 . On July 30, 1926, Feininger and his family moved to Dessau in one of the newly built masters' houses. There Feininger was released from all teaching duties at the Bauhaus at his own request. At Walter Gropius' insistence, he remained “master” until 1932.

In 1930/31, at the invitation of the city of Halle (Saale), he worked on a total of eleven expressionist cityscapes of Halle, in particular the views of the Marktkirche and the Red Tower became known. In 1933 Lyonel and Julia Feininger moved to Berlin. With the help of the Quedlinburg art collector Hermann Klumpp , the couple was able to leave National Socialist Germany on June 11, 1937 for the USA, where Feininger worked as a freelance painter in New York.

During the time of National Socialism , Feininger's works were officially considered “ degenerate art ”. The National Socialists confiscated 378 works by the artist from public collections. A few months after his departure, they showed eight paintings (city views), a watercolor and thirteen woodcuts at the Degenerate Art exhibition in Munich.

Feininger visited New York as early as 1936, taught during the summer months at Mills College in Oakland and prepared for his move to the United States . If Feininger was considered an American painter in Germany, he was practically unknown to the New York public after his return as a “German”. "In the beginning I suffered a lot from the feeling of being a stranger [...]". In the summer of 1937 he taught again at Mills College and made his first watercolors ( Manhattan at Night ), in which he dealt with New York. In 1939 he completed motifs of the Baltic Sea that had already been started in Germany and of Deep in Pomerania . A year later he started a series with "Manhattan pictures", which had the modern "skyscraper" architecture and street canyons as the theme. But for Feininger - although he lives in New York - the remembered motifs from his former home always remained an important subject. In 1944 he met Fernand Léger and exhibited for the first time - together with Marsden Hartley  - a retrospective at the Museum of Modern Art . In 1947 he was elected President of the Federation of American Painters and Sculptors and a year before his death a member of the National Institute of Arts and Letters .

As a member of the German Association of Artists , Feininger took part in the third annual exhibition in the Hamburger Kunsthalle in 1953 and in the years that followed, up to 1956, also exhibited in Frankfurt, Baden-Baden and Düsseldorf.

Feininger died at his home (235 East 22nd Street) in New York at the age of 84. He was buried in Mount Hope Cemetery in Hastings-on-Hudson ( Westchester County , New York). His son Andreas Feininger became a well-known photographer in New York. His son Laurence Feininger (musicologist) died in 1976 in Freienfeld , Italy. 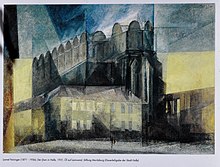 Information board at Hallesches Dom: The cathedral in Halle , 1931, Moritzburg Foundation , Halle an der Saale

Lyonel Feininger participated in documenta 1 (1955) (and also posthumously in documenta III in 1964) in Kassel .

Finer than a composer

From 1921 Feininger also dealt with the composition of musical works. He wrote several fugues for organ , based on his model Johann Sebastian Bach .