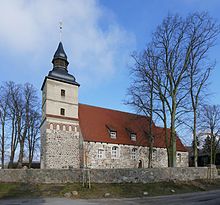 The Benz Church (also: St. Petri Church ) is a church building from the 15th century in the municipality of Benz in Western Pomerania .

The rectangular, single-nave building with a western church tower is designed in an early Gothic style, but has been changed many times. Large parts of today's church building go back to the previous church (around 1300). A choir was added towards the end of the Middle Ages . During the Thirty Years' War the benches were broken out by imperial soldiers and the church was used as a stable for horses. In 1663 the Swedish governor Peter Appelmann had the church renovated, completely refurbished and a hereditary burial set up for his family. There is a simple Renaissance portal on the dome tower, which dates from 1740 . In 1741 the choir was converted into a small church, today's chancel.

Extensive renovation work took place in 1836. The beam ceiling was replaced by a wooden barrel vault on which a coffered ceiling designed as a starry sky was painted in 1909 by the royal court and decoration painter Adolf Dittmer from Stettin. In 1875 the tower was repaired. In 1911 the tower had to be removed with the exception of the lower floor. It was rebuilt in the old style. During the extensive repairs to the church, the interior of the church was also renovated. The starry sky was extensively renovated from 2017.

The furnishings include an altar from 1712 with six small, painted over late Gothic carved figures ( Peter , Elisabeth of Thuringia , the Evangelist John , John the Baptist and Catherine ); these figures are gradually restored to their original color scheme. The limestone grave slab on the north wall of the chancel , which shows the flat relief of the royal chancellor Jakob von Küssow, who died in 1586 in a knightly garb, was originally located above the deceased's crypt in the middle of the chancel.

The organ was made in 1847 by the Stettin organ builder Kaltschmidt and repaired in 1889 by Barnim Grüneberg .

The church bell originally consisted of two bells cast in 1814 by the Schwenn brothers from Stettin . Only one of these still exists; it bears the inscription

"When Bonaparte's high spirits / every people flared to rage /
and Friedrich Wilhelm's bravery / through his Prussian courage /
helped end this dispute victoriously / for freedom of property /
my first sound / of the lovely peace praise heralded."

In 1906, the splendid sarcophagus of Catharina Appelmann (1643–1671), the wife of the governor Peter Appelmann , was found in the cemetery . The sarcophagus was later brought to the local museum in Swinoujscie and has been missing since the end of the Second World War .

The graves of Otto Niemeyer-Holstein and Rolf Ludwig are in the churchyard . Lyonel Feininger often painted and drew the church.

The church became known nationwide through the Benz Church Summer, initiated by Pastor Martin Bartels in 1968, during which numerous concerts, lectures and readings take place in the church every year. Not least because of the performances of songwriters from the GDR who were critical of the regime and guests from West Germany, the church summer developed into a gathering place for the GDR opposition , especially in the 1980s . The artists who performed in Benz during the church summer include: a. Barbara Thalheim , Gerhard Schöne , Wolf Biermann , Christa Wolf , Rolf Ludwig , Hans Werner Richter , Konstantin Wecker and Dieter Hildebrandt .