This article is about the actor; on the statistician see Rolf Ludwig (statistician) . 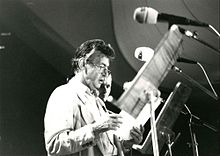 The actor Rolf Ludwig (front) in the radio play studio in a recording by the Berlin photographer Werner Bethsold .

Rolf Ludwig (born July 28, 1925 in Stockholm , † March 27, 1999 in Berlin ) was a German actor . He was one of the most popular and versatile actors in the GDR . In an obituary of the Tagesschau he was described as the " jack of all trades of the great Berlin theaters".

Rolf Ludwig was the son of the printer and innkeeper Richard Hermann Heinrich Ludwig and his wife Emmi, née Martens. When the boy was five years old, his parents returned from Stockholm to Dresden-Leuben , where Rolf Ludwig grew up at Lilienthalstrasse 17. After attending primary school in Dresden, he did an apprenticeship as a printer. In 1942 he was drafted into the labor service. In the Second World War , Rolf Ludwig was a fighter pilot in the Air Force from 1943 . In 1944 he was shot down over Holland, wounded and taken prisoner by the British. In the prison camp near Sheffield he took part in the camp theater.

After the Second World War, Ludwig played for the Radebeul theater group Heiterer Blick . In 1947 he auditioned for a theater role in Dresden . To show his sportiness, he jumped out of a window. However, he had overlooked the fact that he was not auditioning in a room on the ground floor, but on the first floor (second floor). He broke his arm while jumping. Due to his passionate physical commitment, he was immediately engaged: The director Erich Ponto leaned out of the window and shouted: "Young man, you are engaged."

At the Staatstheater Dresden he played in most of the staged plays in various roles. Ludwig laid the cornerstone of his great career at the Volksbühne in Berlin , where he played Truffaldino in Carlo Goldoni's Servant of Two Lords , among other roles, from the mid-1950s to the early 1960s . He later moved to the Deutsches Theater , whose ensemble he was part of until the 1990s. Together with Klaus Piontek , he played in almost all major productions of the German theater. For 16 years he was seen here 580 times as “ The Dragon ” in the play of the same name by Jewgeni Schwarz, staged by Benno Besson .

In 1956 Rolf Ludwig played the title role of Albert Hauptmann in the DEFA film satire Der Hauptmann von Köln , in which Slatan Dudow viciously grapples with the economic miracle in the Federal Republic that goes hand in hand with rearmament. In the following years he played in several quill films. In the DEFA fairy tale film Das Feuerzeug (1959) he took on the role of the good-natured soldier who was deprived of his wages by the king. In the contemporary pleasure game The Man with the Lens (1961) he played the role of Martin Marten, where he and Micaëla Kreißler created the hit You have a little man in your ear . Until the 1970s he played in numerous other comedies. In 1973 Ludwig played the role of professor in the DEFA film classic Die Legende von Paul und Paula . In addition, he played repeatedly in historical and anti-fascist films, such as the painter Hans Grundig in the television film Requiem for Hans Grundig (1975) and the poet Friedrich Hölderlin in Herwig Kippings essayistic diploma film Hommage a Hölderlin (HFF 1983).

Ludwig was often heard in the role of the narrator in numerous LITERA radio play productions that were widely used as recordings in the GDR.

He worked repeatedly with the director Egon Günther , under his direction he played in the Becher adaptation Abschied (1968), in which Ludwig plays the role of a German national father who is a public prosecutor. In the role of Hrdlitschka in the contemporary film The Third (1972) Ludwig was a sympathetic, reserved man who stands in life at the side of Jutta Hoffmann . In Lotte in Weimar (1975), based on the novel by Thomas Mann , he was seen in the role of the waiter Mager vom Hotel zum Elephanten. In Stein (1991), he played an actor who went off the stage when the Prague Spring fell. In Italy he received the Fellini Prize for this .

Even in the late 1990s, Ludwig was still in demand as an actor in film and television. In 1995 he played the pastor Reichenbork in the Erich Loest film adaptation of the Nikolaikirche . He had his last film role in 1997 in the television film Winterkind in the role of Jonathan.

Rolf Ludwig's grave in the "New Cemetery" in Benz on Usedom

At the beginning of the 1990s, his argument with Harald Juhnke over the title of his autobiography soberly considered caused a sensation, as Juhnke wanted to name his autobiography the same. Rolf Ludwig, who claimed to be “not a drinker, but a drunkard”, was heavily dependent on alcohol for decades. Often he was very drunk on stage and was not dismissed only because of his extraordinary talent and the fact that a performance never failed because of it. Even Juhnke had to see this and settled the dispute.

After his cremation in the Meißen crematorium , Ludwig was buried in Benz on the island of Usedom.