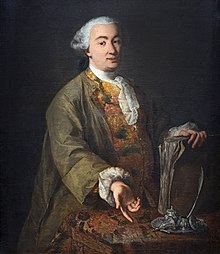 This article or section needs to be revised: The text is apparently based on the Enciclopedia italiana , but has been translated very incorrectly.
Please help to improve it , and then remove this flag.

Goldoni received his first scientific education at Jesuit and Dominican colleges in Perugia and Rimini , then studied law and philosophy in Venice and Pavia . First he embarked on a law career: he became secretary to the vice-chancellor of the criminal court in Chioggia , which he followed to Feltre in 1729 . Meanwhile, he tried his hand at a amateur theater in the operas Didone and Siroe by Pietro Metastasio , which he himself set up to perform without music, and wrote the two comedies II buon padre and La cantatrice , which met with great acclaim. After receiving his doctorate in Padua in 1731 , he practiced as a lawyer in Venice for some time , without renouncing his favorite occupation, dramatic poetry.

But very soon an unfortunate affair of love compelled him to suddenly leave Venice. In 1734 he joined a Commedia dell'arte troupe, which he provided with spoken and sung texts, and was hired as assistant to Domenico Lalli , the poet of the most important opera house in Venice , S. Giovanni Grisostomo. His work there consisted mainly of setting up opere serie for other librettists. In Venice, his first major dramatic attempts, Il gondoliere veneziano , Belisario , Rosamunda, were performed by , among others, a group of actors he had met in Verona , and some of them received great acclaim. Always occupied with literature, Goldoni lived for several years in various cities in northern Italy until he met the daughter of a notary in Genoa , whom he married in 1736.

Financial constraints caused him to leave Venice in 1743 and to settle in Tuscany as a lawyer . Only when he succeeded in 1748 in a stable relationship with Girolamo Medebach (1706-1790) and his theater company, which played in the theater of Sant'Angelo in Venice, he gave up the lawyer entirely to work exclusively for dedicate this stage. He now wrote a large number of pieces which at last gave the taste of the audience a decisive turn in favor of the new direction. Around this time he began working with Ciampi , but then with Baldassare Galuppi , on whose opere buffe most of his importance as a librettist is based. Over the next seven years, this collaboration resulted in some of the most successful buffo operas in Italy.

His fame soon spread beyond Italy's borders and brought him a call to Paris in 1761 to work for the Italian theater there. He stayed there for the last 30 years of his life. Here he wrote several more Italian pieces and two French ones, one of which, Le bourru bienfaisant , was performed with great success in Fontainebleau in 1771 ( Der gutherzige Murrkopf , Augsburg 1785). When his contract with the stage there expired, King Louis XVI appointed him . to the language teacher of his daughters and gave him a salary of 3,600  livres , which he lost during the French Revolution . The National Convention allowed him to do so again.

He was one of the first foreign members of the Accademia Roveretana degli Agiati, founded in 1750 . He died on February 6, 1793 at 21 Rue Dussoubs at the age of 85 in the 2nd arrondissement of Paris and was buried in the now abandoned Sainte-Catherine cemetery. The location of the former cemetery is on the border of the 5th and 13th arrondissement under Boulevard Saint-Marcel 51-66.

In his theatrical work centered on Venice (often in Venetian ), Goldoni assumed the role of a reformer of the Italian comedy. In place of the Commedia dell'arte, with its harlequinads and antics, its indecency and fantastic inventions, he represented the character and moral comedy based on Molière's model. During the years of struggle that he had to wage against the previous form, and in which Carlo Gozzi was his main opponent, he frequently changed his whereabouts and repeatedly worked as a lawyer. Only after his return to Venice in 1748 were his efforts gradually crowned with success, and he was able to earn a living from his literary work.

Goldoni wrote about 200 pieces and tried his hand at all dramatic genres. His fame, however, is based primarily on his comedies, some of which still belong to the old genre of masked games, albeit in a much improved form. His main merit is the introduction of the regular comedy, especially the comedy of morals and characters. With his extraordinary productivity he often worked fleetingly and unevenly; also, compared with Molière in particular, he lacks comic strength and genuine humor, even if not many good ideas. He drew the customs of his time and nation with great truth and sharpness, in natural language and lively dialogue.

Goldoni's comedies also deal with influences of their time, for example the Enlightenment , and his comedies repeatedly portray the decline of the nobility and the rise of the bourgeoisie .

Goldoni was a member of the famous Accademia dell'Arcadia and therefore, unlike his works for spoken theater, signed his libretti with the pseudonym Polisseno Fegejo , under which he belonged to this literary society. However, in his autobiographical writings he spoke rather disparagingly of them as a lucrative sideline. Many of the textbooks he wrote, especially those from his collaboration with Galuppi, were - contrary to the usual practice in the opera buffa - repeatedly re-dubbed. a. by Antonio Tozzi , Karl Ditters von Dittersdorf , Joseph Haydn , Wolfgang Amadeus Mozart , Giovanni Paisiello , Marcos António Portugal , Niccolò Piccinni , Antonio Salieri and Domenico Cimarosa . In the course of these new settings, his original libretti were often greatly modified, which led him to explicitly warn against falsifications in his Mémoires (Paris, 1787).

He reliably provided the composer with varied material, often located in the sphere of the fantastic, with a lot of spectacle and unexpected turns of the plot. In contrast to Pietro Metastasio , Goldoni tried to adapt his texts to the ideas of composers, and not the other way around. Goldoni was the first to consistently use the term dramma giocoso as a generic name, and his understanding of this term as a mixture of different types of roles from serio to buffo set the style for other librettists, for example Giovanni Bertati and Lorenzo da Ponte .

Usually a typical (original) Goldoni libretto begins with an opening ensemble, followed by a colored tableau and a first hint of the dramatic escalation. Typically, the entire three-act form is provided with plenty of ensemble parts, and the third act contains a duet of the two main characters immediately before the finale. His main contribution to the opera buffa of that time, however, were the extensive finali , enriched with plenty of action , which were designed for uninterrupted music. This innovation forced the composers of that time to deal with action or sudden events in the context of a musical “number” and not deal with these dramatic turning points in recitative , as was customary up to now . In this respect, Goldoni undoubtedly played a major role in the development of opera buffa in the second half of the 18th century.

A total of 80 libretti, by far most of them buffo operas .