The servant of two masters

The Servant of Two Masters is the most famous play by the Italian playwright Carlo Goldoni . It was premiered in Milan in 1746 and is considered the culmination of the Commedia dell'arte .

Florindo is accused of killing his lover's brother Beatrice and fled the allegations to Venice. Disguised as a man, Beatrice follows him, accompanied by her servant Truffaldino. Without the two lovers knowing of each other, they take a room in the same pub. Truffaldino also enters Florindo's service - without Beatrice's knowledge - because he is paid too badly to be able to live adequately. He becomes the servant of two masters and thus gets into numerous difficulties, from which he can always save himself. In his lies he goes so far as to claim that the other master is dead. Ultimately, Truffaldino accidentally brings the two lovers back together and is rewarded by marrying the maid Smeraldina.

From 1743 to 1748 Goldoni worked as a lawyer in Pisa. Inspired by the famous Arlecchino or Truffaldino actor Antonio Sacchi (1708–1788), Goldoni wrote his successful comedy The Servant of Two Masters there in 1745 . The Italian original version is therefore also known under the title Arlecchino servitore di due padroni and makes reference to the harlequin . 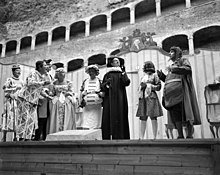 Resumption at the Felsenreitschule, August 7, 1946

On April 1, 1924, Max Reinhardt opened the Vienna Theater in the Josefstadt after a major renovation with Goldoni's The Servant of Two Lords with Hermann Thimig as Truffaldino, Helene Thimig as Smeraldina, Hugo Thimig as Pantalone and Gustav Waldau as Dottore. Guest performances in Berlin and other European countries followed, in 1928 even in New York. Reinhardt also opened the comedy on Kurfürstendamm in Berlin in November 1924 with this play. In 1946 Reinhardt's production was resumed by Hermann Thimig at the Salzburg Festival in the Felsenreitschule , with Oskar Laske's equipment and Grete Wiesenthal's choreography .

A performance by Giorgio Strehler at the Piccolo Teatro in Milan in 1947 became world famous . The Truffaldino played Marcello Moretti , after his death from 1963 Ferruccio Soleri , who performed in this role until the age of 78. Strehler's performance in Ezio Frigerio's stage design was on the program for decades and traveled half the world.

On March 22, 1992, Rudolf Plent staged the play at the Theater am Meer - Niederdeutsche Bühne Wilhelmshaven in Low German premiere under the title Der plietsche Tüffelhannes in an arrangement by Arnold Preuss, who also played the title role of Tüffelhannes (Truffaldino).

The renovated theater in der Josefstadt opened on November 15, 2007 with an adaptation of the play by Peter Turrini .
On August 25, 2011, the Munich Chamber Opera performed the piece for the first time as an opera with music by Mozart , who was planning to set it to music in 1783, in an arrangement by Alexander Krampe . The Cottbus State Theater performed the play as an open air version for the first time on August 10, 2013 in the courtyard of the Alvensleben barracks in Cottbus .

Since the 1970s, the piece has often been played in German-speaking countries as translated by Uwe Schuster and Hartwig Albiro . B. 2015 in the production of Robert Schuster at the Freiburg Theater .

Commons : The servant of two masters  - collection of images, videos and audio files