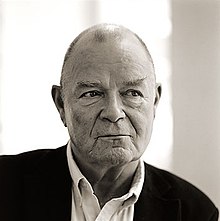 Dieter Mann (born June 20, 1941 in Berlin ; † February 3, 2022 in Berlin ) was a German director , director , actor , radio play announcer and university teacher . He had his breakthrough in the 1970s in Ulrich Plenzdorf 's The New Sorrows of Young W. as the young rebel Edgar Wibeau, whom he played more than 300 times on stage. In his career he acted in several theater productions and in over 140 film and television productions. Between 1984 and 1991 he was director of the Deutsches Theater Berlin. He was also a member of the GDR Academy of Arts and, since 1993 , a member of the Berlin Academy of Arts .

Dieter Mann was born the son of a worker in Berlin-Tiergarten and attended elementary school in Berlin-Pankow . After graduating from school, he completed an apprenticeship as a lathe operator at VEB Kühlautomat Berlin. From 1955 to 1957 he worked as a skilled worker at the VEB grinding machine factory in Berlin. After graduating from the Friedrich Engels Workers' and Farmers' Faculty in Berlin, he began studying at the State Drama School in Berlin in 1962.

Dieter Mann had an older brother who worked as a foreign correspondent . He lived with his wife near Königs Wusterhausen am Krüpelsee . His daughter Pauline Knof , born in June 1980 , also took up acting. In May 2016, at a reading at the Deutsches Theater Berlin, he announced that he had Parkinson's disease.

While still a student, Mann was engaged by his teacher Friedo Solter at the Deutsches Theater (DT) in 1964 and had his first major success as Volodja in Unterwegs by Wiktor Rosow .

From 1964 to 2006, Dieter Mann was a permanent member of the ensemble at the Deutsches Theater in Berlin, where he played a large number of roles in contemporary and classical theater productions, e.g. the Templar in Gotthold Ephraim Lessing's Nathan the Wise , the Clavigo in Goethe's tragedy, more than 300 times the young rebel Edgar Wibeau in The New Sorrows of Young W. , the Truffaldino in Goldoni's Servant of Two Masters , Demetrius in A Midsummer Night 's Dream , the Wehrhahn in Hauptmann 's Biberpelz , Creon in Antigone by Sophocles and Odysseus in Ithaca by Botho Strauss .

After leaving the permanent engagement, Mann continued to appear as a guest at the Deutsches Theater and also in various roles at the Berliner Ensemble and the Staatsschauspiel Dresden . Engagements as a guest actor have taken him to the Deutsches Schauspielhaus Hamburg , the Schauspiel Frankfurt , the Wiener Festwochen , the Sächsische Staatsoper Dresden as well as the Staatsschauspiel Dresden, the Bregenzer Festspiele , the Düsseldorfer Schauspielhaus , the Wiener Burgtheater and the Theater Basel . Mann also gave various readings and gave literary solo evenings.

In 1965 Mann made his film debut in Gerhard Klein's Berlin around the corner in the role of the young metal worker Olaf, who together with his friend Horst tackles the bad working atmosphere. The shooting was interrupted at the time by the SED because the film seemed too critical. The premiere took place in 1987.

As early as January 1965, Dieter Mann - often with guitar and his own singing - as a presenter created the beginnings of youth television on German television . Bazaar was the name of this entertaining studio magazine; it offered music, performers and themes for 12- to 16-year-olds and aired until 1972.

In the late 1960s and early 1970s he appeared primarily in supporting roles. In 1968 Konrad Wolf cast him in the role of Willi Lommer in his feature film I was nineteen . Under Rainer Simon he acted in the DEFA fairytale film How do you marry a king? the farmer. In Frank Beyer's four-parter The Seven Affairs of Doña Juanita , he took on the role of Lewerenz. In 1975 he played the servant Karl in the Thomas Mann film Lotte in Weimar . In 1976 he acted in the television two-parter Auf der Suche nach Gatt , based on a novel by Erik Neutsch , as the miner Eberhard Gatt, who aspires to a career as an editor and journalist and meets his future wife during an evening class, in the title role. In 1978 he was seen in a leading role in Bruno Kappel's adaptation of the Franz-Josef-Degenhardt material Brandstellen directed by Horst E. Brandt . Mann had another leading role in 1980 as the forty-year-old librarian Karl Erp in Herrmann Zschoche 's Glück im Hinterhaus , which was in a mid-life crisis and is loosely based on the novel Buridan's Esel by Günter de Bruyn . In 1981, when he hosted the Saturday night show Ein Kessel Buntes on May 2nd, he was a TV darling for FF magazine . The audience also honored Mann's comedic portrayal of the leading role in the television comedy So ein Mann , which Hans-Joachim Preil had written for him. In 1986 he appeared in all seven episodes of Christa Mühl's Christmas Stories in different costumes and roles.

After reunification , Mann appeared in a number of productions on the big screen and on television. He repeatedly took on guest appearances, e.g. in series such as AS - Danger is his business , Peter Strohm , Tresko , A strong team , Stubbe - From case to case , In all friendship , Rosa Roth , Bella Block and several times in the crime scene . From 1998 to 2007, he was a Prof. Dr. To see Siegmar Bondzio in the series The Last Witness .

In Frieder Wittich 's film comedy 13 semesters he took on the role of Professor Schäfer of the TU Darmstadt . He played his last screen role in 2011 alongside Renate Krößner in Forget Your End as Günter , who suffers from dementia . He had his last role in front of the camera in 2014 alongside Michael Gwisdek , Anna Loos , Ursula Karusseit , Jutta Wachowiak and Marie Gruber in Udo Witte 's television comedy The Last Millions .

In 2020 Mann received the honorary award of the German Acting Prize 2020 for his life's work.

Dieter Mann also worked as a radio play announcer. From 1968 he was continuously involved in numerous radio play productions for the radio of the GDR . In 2001 he read together with his fellow actors Otto Sander , Ulrich Mühe , Dagmar Manzel and Katharina Thalbach as part of the Germans' favorite poems. 100 poems several poems, e.g. Steps by Hermann Hesse .