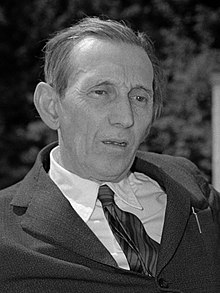 Walter Mehring (born April 29, 1896 in Berlin , † October 3, 1981 in Zurich ) was a German writer and one of the most important satirical authors of the Weimar Republic .

Walter Mehring was a Jew , the son of the publicist and translator Sigmar Mehring ; his mother was the Prague opera singer Hedwig Löwenstein (born October 25, 1866), who was deported to Theresienstadt , where she died on August 9, 1942. He attended the Royal Wilhelms-Gymnasium until he was expelled for "unpatriotic behavior" and had to take his Abitur externally. In 1914/15 he studied art history for two and a half semesters in Berlin and Munich.

In 1915/16 Mehring published his first poems in Herwarth Walden's magazine Der Sturm . In 1917/18 he was a co-founder of the Berlin Dada section . Mehring was charged with profanity for the publication of the poem Der Coitus im Dreimäderlhaus in the Dadaist magazine Jedermann his own football , and the issue was confiscated. The trial ended in acquittal. His poems from the early 1920s are among the essential works of Expressionism .

Since the 1920s Mehring published regularly in various literary magazines. Above all in the Weltbühne edited by Siegfried Jacobsohn and in the Tages-Buch he wrote poems and satirical prose against militarism, excessive nationalism, anti-Semitism and National Socialism. Alongside Kurt Tucholsky, he was one of the founders of the political-literary cabaret in Berlin (title of his first volume of poetry: The Political Cabaret , 1920) and in the 1920s wrote chansons and texts for all the well-known Berlin cabaret theaters: for example for Max Reinhardts Schall and Rauch , for Rosa Valetti's Café megalomania and for Trude Hesterberg's Wilde Bühne . From 1921 to 1928 he lived in Paris as a correspondent and researched and translated the revolutionary songs of the Paris Commune . The amusing, grim political thriller Paris on Fire (1927), written in Paris and depicting the adventurous life of the Belgian mystic Antoinette Bourignon in the 17th century, was also a grandiose satire on the contemporary “Great Whore Press”.

His songs, poems, chansons and plays made him famous - and hated: his play Der Kaufmann von Berlin (1929), a parody of the inflation profiteers, premiered by Erwin Piscator in the Theater am Nollendorfplatz , provoked a scandal, the SA demonstrated in front of the Theatre; In the attack, Joseph Goebbels wrote a full-page inflammatory article against him with the headline To the gallows . Many of his books ended up at the stake during the book burning on May 10, 1933. Mehring narrowly escaped being arrested by the SA, emigrated, was interned in France in 1939 and escaped extradition in 1941 by escaping from the St. Cyprien camp and escaped to the USA via La Martinique.

In 1953 Mehring returned to Europe and lived in Berlin, Hamburg and Munich, in Ascona in Ticino and finally in Zurich. He was buried in the Sihlfeld cemetery in Zurich.

In 1967 he was awarded the Fontane Prize . Since 1956 he was a member of the German Academy for Language and Poetry in Darmstadt .

Müller. Chronicle of a German clan from Tacitus to Hitler

This novel applies to Otto Michael Knab's small town under the swastika (1934), Werner Türks Little Man in Uniform (1934) and Paul Westheim's Heil Kadlatz! The Way of an Old Fighter (1936) as one of the first satirical novels about National Socialism. In it, Mehring describes the family history of the Müller family, who, as born subjects, have fitted into every form of government in German history. In a framework story, Mehring describes himself as the editor of the clan historical records with which the last of the clan, Dr. Arminius Müller (note the identity of the name with Arminius , the winner of the battle in the Teutoburg Forest in 9 AD against the Romans) wanted to prove his pure Aryan descent into Roman times. Because based on a Roman police file, Dr. Müller prove that his ancestor, the Germanic lust boy Millesius, was involved in a brothel fight. The history of German historiography begins in this brothel, because Millesius dictates his main work, Germania , to the moralist and fellow visitor Tacitus .

This is how Mehring proceeds with the rest of the glorious patriotic history: Christianization , the heroic deeds of the crusade knights , but also the persecution of witches - everything was influenced by members of the Müller family. Later there was even a miller in the long guard of the soldier king , a liberation warrior against Napoleon, who, however, was unable to take part in heroic deeds due to being drunk - and finally Dr. Arminius Müller, who revived the Germanic cult in his apartment and was only excluded from the National Socialist movement because of his Jewish wife and died in Paris, where the exile Walter Mehring wanted his estate.

The novel was withdrawn by Mehring in the year of its publication in 1935, because the German ambassador Franz von Papen put pressure on the Austrian government and asked Mehring for the "work (s) that represented a gross insult to the Aryan race feeling" not to embarrass the state of Austria into having to hand it over to the German Reich.

Mehring dedicated his book The Lost Library , subtitled autobiography of a culture, with a subjective selection that was more meaningful for him personally to the library he had lost while fleeing the Nazi regime and which went back to his great-grandfather and which had been left to him by his father Sigmar Mehring Works and "Solitaire of German exile and memory literature." The book is an ingenious analysis of the ineffectiveness of the poets and thinkers of the 19th and early 20th centuries in view of the barbarism of the " Third Reich ". His remarks on Berlin Dadaism, literary expressionism , surrealism and futurism of the 1920s, the Prague literary scene between the two world wars and the beginning of National Socialist persecution are of particular documentary value .

Under the impression of Nazi rule and the World War, a mixture of autobiography and contemporary image, literary history, literary criticism and political-social reflection emerged. The author had the idea for these records during the Second World War in a French internment camp and in American exile. It was first published in English in 1951 as The Lost Library in New York, then in German in 1952 and in French in 2014 under the title La bibliothèque perdue. 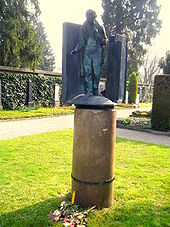 In many bibliographies, Mehring uses the work Timoshenko , published in 1942 in New York (Albert Unger) in English . Attributed to Marshal of the Red Army (Deutsches Exilechiv 4037). Walter Mehring has rejected Frank Hellberg's authorship.