This article deals with the municipality of Ascona, for further meanings see Ascona (disambiguation) .

Ascona , in the alpine Lombard local dialect Scona [ ʃkona ], is a municipality in the Swiss canton of Ticino ( District Locarno , county Isole ). The earlier German names, based on Lombard, Aschgunen or Aschgonen are no longer used today. 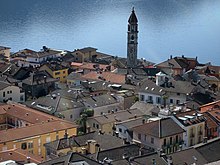 View of the roofs of Ascona

Historical aerial photo from 100 m by Walter Mittelholzer from 1929

Town hall in Ascona, seen from the lake side

The former fishing village and later health resort is located on the north shore of Lake Maggiore . Neighboring communities are Locarno , Losone , Ronco sopra Ascona , Brissago and Centovalli . Ascona is the lowest-lying village in Switzerland, as the village center is located directly on the lake. In the west, the community extends beyond the wooded mountain and viewpoint Corona dei Pinci , which is at 1293 m above sea level. M. lies.

Excavations in 1969 in and around the Church of San Michele uncovered Neolithic flint and ceramic shards. Pottery from the Middle and Late Bronze Age has been found in the necropolis of San Materno . On the nearby hill Baladrum was around 1000 BC. A fortified hilltop settlement, of which remains of dry stone walls are still present.

Ascona appears in written sources for the first time in 1186, 1189 or 1191 (uncertain dating), when the Bishop of Como , Anselmo della Torre, lands in Ascona and Locarno including the castle of San Michele - castrum quod dicitur Sconae - the Pietro de Duni and other nobles were given to fiefdoms , which they then expanded. In 1224 the village was mentioned as burgus de Scona . Around 1250, the Milanese Griglioni and Carcani families, as war refugees, moved their headquarters to Ascona and built castles right on the lake shore, where the lake promenade is today. Around the same time, the Orelli family took possession of part of the castle, which they restructured and expanded. Around 1400, the Duni family moved their residence from San Michele Castle down to the village, causing the castle to fall into disrepair. In the 17th century the dilapidated castle chapel was replaced by the church of San Michele .

Ascona and Ronco formed a single community until the 16th century. When the municipalities were separated at that time, Ascona has retained a strange-looking 100 m wide strip of beech forest that is around 1200 m above sea level. M. moves about 4 km to the west. The reason for this territorial claim at that time was the use of beech wood for charcoal burning . Traces of two charcoal piles can still be seen today, and the field name Carbonera also reminds of the former importance of this forest.

Ascona once belonged to Milan (see the main article → History of Milan ) and from 1403 and 1512 as Ennetbergische Vogtei to the Old Confederation . In the Helvetic Republic proclaimed in 1798 , Ascona belonged to the canton of Lugano , and since 1803 it has been a municipality of the newly founded canton of Ticino (see the main article → History of the canton of Ticino ).

The hill above Ascona, the Monte Verità , was of great cultural importance in the first half of the 20th century - especially between 1900 and 1920. There dropouts, life reformers and revolutionaries gathered and proclaimed free love, vegetarianism, anarchy and communitarian ideas in a unique mixture.

During the time of National Socialism, German refugees found refuge in Ascona. For example, the publicist Helene Stöcker , the sexologist Magnus Hirschfeld , the writers Ernst Toller and Max Barth and the journalist Dora Fabian lived there at the same time .

In the post-war period, the Dutchman Leo Kok made Libreria della Rondine Ascona a meeting place for artists and writers living in Ticino with his second-hand bookshop .

Today Ascona lives from tourism and accommodates around 20,000 to 25,000 holidaymakers in the summer season. In addition, the share of second homes was 52% in 2014, which according to Swiss law does not allow any new second homes.

At the end of the 1980s, a 1.1 kilometer long road tunnel was built under Monte Verità. Before that, the cars crossed downtown Ascones, which resulted in long traffic jams, especially during the holiday season. Today the cars drive through the tunnel past Ascona, the old riverside road serves as a pedestrian zone and local traffic.

The Ascona ship landing stage at Lungolago (Seeplatz) is operated from April to around mid-October by Navigazione Laghi (shipping on the entire Langensee, Italian company) and, since 2019, also by Società Navigazione del Lago di Lugano (local shipping on the Swiss part of the lake, Swiss Society) approached and served. The ships head east towards Locarno or southwest towards Porto Ronco, Isole Brissago, Brissago, Cannobio and Verbania.

The Aerodromo Ascona sports airport, opened by Emanuele Bianda in 1947, was abandoned in 1997; the closest is now the Aeroporto cantonale di Locarno east of Locarno

Ascona is on the main road 13 , which begins at the German border at Trasadingen and leads to Brissago on the border between Switzerland and Italy.

Wash basin on the lake promenade in Ascona

Ascona has a picturesque lake promenade that dates back to the 13th century, but only achieved its current shape as a result of landfills in the 20th century. Wash basins on the lake promenade, which were used for washing clothes well into the 20th century, have been preserved and signposted. The village image is classified in the inventory of protected sites in Switzerland (ISOS) as a site of national importance in Switzerland.

Inner courtyard of the Collegio Papio

The most important sacred buildings are the parish church of Santi Pietro e Paolo and the church of Santa Maria della Misericordia .

The most important secular buildings in the town center are the town hall, the Casa Serodine and the Collegio Papio .

Of the four former castles, only the Castello dei Griglioni on the lake promenade still exists today . Considerable parts of the wall have been preserved from him and built into younger buildings (today a hotel). The Carcani tower, which was once also located on the lake promenade , was destroyed in the late Middle Ages, and the Castello di San Michele , elevated above the village, was partially demolished in the 17th century to make room for the church of San Michele; most of the remaining ruins were demolished in 1912. Of the original structure of the Castello di San Materno , located on the northern edge of the municipality and largely rebuilt in the 19th and early 20th centuries , only the remains of the Romanesque castle chapel have survived.

To the west of the town center is Monte Verità . Have survived from the time of former vegetarian and Naturistenkolonie the Casa Selma, the Casa Aida and Casa dei Russi - all Spartan-called "light-air huts" of 1901/1902 - and the Casa Anatta (1904 by Henri Oedenkoven ). The Albergo Monte Verità , built by Emil Fahrenkamp for Eduard von der Heydt in 1926/1928 by Emil Fahrenkamp for Eduard von der Heydt , is considered to be the most important witness of modern architecture in Ticino . Other important buildings of classical modernism in Ascona are the Teatro San Materno . (1927/1928 by Carl Weidemeyer for Charlotte Bara ), the Villa Chiara or Oppenheim (1934/1935 by Carl Weidmann) and the Villa Tuia (1960/1961 by Richard Neutra ).

The 18-hole golf course in Ascona is a member of a golf club founded in 1928. The course, built by British architects, is located in parkland near the lakeshore and has hosted international tournaments several times.

Minigolf Ascona was opened in 1954. The course is located in a park not far from the piazza and is the world's oldest standardized mini golf course .

Ascona has its own football club, the Ascona Football Club.