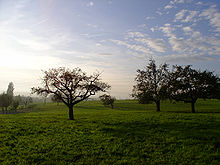 The park landscape is a type of landscape , more precisely a cultural landscape created by agriculture .

Hedgerows , thickets , meadows , pastures , flood plains and small woods give it a park-like expression. But arable land , grassland and forest areas are also features of this landscape. In a broader sense, farmsteads also determine the appearance of the areas, which are structured in small pieces by hedges , strips of wood , paths, streams or other boundaries. Nevertheless, due to the mostly flat to slightly wavy topography, the open character is retained.

Park landscapes in this sense emerged over centuries in the interaction of man and nature, but a dedicated optical design cannot be assumed, at least in the area. Industrialization and urbanization eventually resulted in significant decline. The areas that have largely been preserved to this day include the Münsterland parkland and the Ammerland parkland .

Occasionally, a historical park landscape is one that was created around country estates or castles and follows the type of the English landscape park . It should resemble the park belonging to the property and was therefore subject to a creative hand. In contrast to the park, the purpose of this facility was not recreation, but primarily agriculture. One example of this is the Branitz outdoor park .