The title of this article is ambiguous. Further meanings are listed under Locarno (disambiguation) .

The city of Locarno is located on the north bank of Lake Maggiore and on the eastern edge of the Maggia Delta. The Monti della Trinita district nestles on the slope above the city , and the territory of the municipality also includes a large area in the Magadino plain , the Gerre di Sotto , which is not connected to the urban area .

In structural terms, the urban area of ​​Locarno has grown together with the independent municipalities of Muralto (see section Transport), Minusio and Orselina . The Locarno agglomeration has around 40,000 inhabitants.

Together with the rest of southern Ticino and the province of Como, Locarno belongs to the metropolitan region of Ticino defined by the Federal Statistical Office .

Together with Lugano and Grono, Locarno is the warmest place in Switzerland and is considered the northernmost town with a Mediterranean climate on a lake. The Locarno-Monti measuring station in a slightly elevated position recorded an annual mean of 12.4 ° C for the period 1981-2010. Therefore, many southern plants such as palm or lemon trees thrive in Locarno . Not least because of the mild climate, Locarno is heavily influenced by tourism.

Rice is successfully planted in the Magadino plain near Locarno .

The city was first mentioned in 751–760 (copy of the 17th century) as ad Lucarne and 807 as locus Leocarni . The interpretation of the name is uncertain. A derivation of Celtic leucos, leuca «white, bright, luminous», as it has been proposed on various occasions , fails for reasons of sound, since intervocal Celtic and Latin / k / in the later northern Italian varieties became / g / (cf. the place name Lugano ) or dwindled. Barbara Meroni therefore suggests in the Lexicon of Swiss Community Names (2005) to start from a geminated Celtic * leuccos, leuccā «bright, shining». A * leukkarni on which the current form of the name is based would mean "the residents of the river * leukkarā (" the sparkling, shining one ")".

The place where Locarno is today was already settled in the younger Bronze Age (around 14th century BC), as we know thanks to a necropolis discovered in 1934 . Later settlements can be proven due to necropolises from the Latène and Roman times . In 866 a royal court is mentioned in documents. Friedrich I. (HRR) granted Locarno a new market right in 1164 and imperial immediacy in 1186 . In 1342 the Visconti conquered the city, who gave it to the Rusca as a fief from 1439 to 1503.

The confederates conquered the city in 1503, but did not receive the castle until 1513 from the hands of the French King Louis XII. A bailiff of the twelve places from then on exercised civil and criminal jurisdiction. The city was ruled by the three corporations of the nobility (Capitanei dei Nobili), the bourgeoisie (Borghesi) and now also the country people (Terrieri), who met in the Landscape Council (Magnifico Consiglio) .

The Reformation also took hold in Locarno around 1530; the Carmelite Balthasar Fontana studied the Bible and Reformation writings together with other brothers. From 1539 the priest and teacher of the Latin school in the monastery of San Francesco Giovanni Beccaria , the doctor Taddeo Duno and the lawyer Martino Muralto were the leading figures of the growing Reformation movement. From 1542 to 1544 the Protestant bailiff of Glarus, Joachim Bäldi, supported the Reformation forces. It was not until 1547 that there was a break with the Catholic Church, and an independent Protestant congregation emerged, which met in private houses. A religious talk in 1549, chaired by the Catholic bailiff Nikolaus Wirz, did not lead to an agreement, but to the termination of the conversation, to the brief arrest and expulsion of Beccaria, who fled to Roveredo and Mesocco in Misox in Graubünden. In 1555 the Reformed had to give up their new evangelical faith or leave Locarno. 170 people, about half of the Protestant population, decided to leave the country and moved through the Bündnerland to Zurich , where they were finally accepted. After initial difficulties with integration, they subsequently worked in textile trade and production and contributed to the economic boom through their knowledge and relationships.

Locarno remained torn, smaller and poorer through the expulsion of the evangelicals, suspicions and resentments. In 1584, the plague struck the city and decimated its population so severely that only 700 of the original 4,800 people remained.

After the collapse of the «Ancien Régime», Locarno became part of the newly created Helvetian canton of Lugano in 1798 . It has belonged to the newly created canton of Ticino since 1803 , the capital of which it was regularly from 1821–1827, 1839–1845, 1857–1863 and 1875–1881. In the 1870s, when transport connections to both the north and the south improved, the hotel and tourism industry began to develop in the Locarno region, and these still form the economic backbone of the city today. The Locarno Film Festival first took place in 1946.

On October 16, 1925, the Locarno Treaties were signed between Germany, Belgium, France, Great Britain, Italy, Poland and Czechoslovakia, which re-regulated Germany's status under international law after the First World War .

1928 merged the hitherto independent community Solduno with the city of Locarno. In 2011 a referendum failed to merge the municipalities of Locarno, Muralto , Minusio , Orselina , Brione sopra Minusio , Mergoscia and Tenero-Contra . Only in Locarno itself and in Mergoscia, which is not spatially adjacent to Locarno, was there an approving majority.

In 2017, Locarno was awarded the honorary title of “ Reformation City of Europe ” by the Community of Evangelical Churches in Europe .

The legislature of the city of Locarno is the consiglio comunale ( local council ), which has 40 seats. The graphic on the right shows its composition in October 2016.

Locarno is the end of two railway lines. These do not end in Locarno, however, but in the neighboring municipality of Muralto, where the Locarno train station is located. The standard gauge SBB - distance from Bellinzona reached the aboveground head station from the east and not affected Locarno. The narrow-gauge Centovalli Railway ( FART / SSIF ) from Domodossola reaches its end point from the west. It has not passed through Locarno since 1990, but is led via a tunnel to the underground terminus. This is located within the SBB area in Muralto north of the SBB facilities, where the FART facilities were located until 1990.

At the western end of the track and platform of the Locarno terminus, still in Muralto, is also the starting point for the FART bus lines and the PostBus, which serve the side valleys. On the opposite side of the street from Via della Stazione, cross the municipal boundary between Muralto and Locarno, which is separated by the Ramogna stream, on the left at the end of the colonnade. The valley station of the Funicolare to Madonna del Sasso is right behind the stream in Locarno, where Via della Stazione becomes Viale F. Balli .

In the early 1990s, the 5.5 kilometer long Mappo-Morettina road tunnel was built under Locarno to ban through traffic from the city center .

The Italian shipping company Navigazione Laghi , responsible for the four northern Italian lakes, operates shipping in the Swiss part of Lake Maggiore and connects Locarno with the other cities on the lake.

Six kilometers east of Locarno is the Aeroporto cantonale di Locarno and the Locarno airfield command of the Swiss Air Force .

The townscape is classified in the inventory of protected sites in Switzerland (ISOS) as a site of national importance in Switzerland.

The Sanctuary Madonna del Sasso in Orselina above the city is the main attraction of Locarno and at the same time the most popular pilgrimage site in Italian-speaking Switzerland. The foundation goes back to an apparition of Our Lady, which the Franciscan brother Bartolomeo d'Ivrea had on the night of August 14th to 15th, 1480. The pilgrimage church is known for its significant furnishings. There is also a viewing platform here. 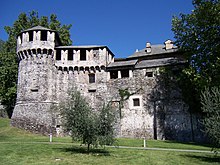 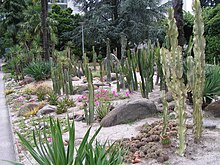 Cactus garden near the lake shore

The center of the city is the long, cobbled Piazza Grande . Numerous open air concerts take place here: since 2004 the Moon and Stars music festival in July and the Locarno Festival in August , one of the most important film festivals in the world. There are many restaurants, cafes and shops in the Piazza Grande . All of the alleys in the old town are heading towards the car-free square since June 2007.

The Castello Visconteo on the edge of the old town was built in the 12th century, probably as the residence of the loyal Capitanei Orelli; In 1260 it fell into the hands of the Ghibellines . In 1342 the Visconti of Milan took the castle; In 1439 it passed to the Rusca. It came into federal possession for the first time in 1503, and finally in 1516. Today only about a fifth of the original castle is preserved. The majority of the structures that have been preserved go back to the building activities of the Visconti and Rusca and thus date from the 14th and 15th centuries, although the current appearance is due to a reconstruction between 1921 and 1928.

The remains of the Rivellino defense bastion next to the castle may have been designed by Leonardo da Vinci .

In the Castello Visconteo is municipal museum with its archaeological collection housed.

The parish church of San Antonio Abate is a large, single-nave building; the current one is from 1664. The church Maria Assunta or Chiesa Nuova from 1636 contains one of the most important stucco decorations of the baroque in Ticino. The church of San Francesco , attached to the former Franciscan monastery, is a three-aisled basilica and is an impressive example of mendicant order architecture. The church of Santa Caterina was almost completely rebuilt in the 17th century and has elaborate stucco work from the 18th century. Santi Rocco e Sebastiano used to be the seat of the Capuchins and was consecrated in 1604.

Numerous large houses are reminiscent of the aristocratic families of Locarno. The Casa Rusca (today the communal picture gallery) is a palazzo from the 18th century with an inner courtyard with a loggia. The Palazzo Rusca-Bellerio in its current form dates from the 16th to 18th centuries and has ornamental decorative paintings on the upper floor. The Casa dei Canonici from the 16th and 17th centuries has a street facade with stucco. The Casorella is an imposing manorial building from the late 16th century, in which the medieval wall parts of the Castello Visconteo are included. The Palazzo Franzoni presents itself as an elegant baroque building from the 17th century. The Casa dei Negromanti is a large building area of ​​medieval origin and takes its name from Giovan Battista Orelli, known as il Negromante ("the magician"), who lived here in the 18th century. The Swiss cross in the entrance area, painted in the middle of the 16th century, is one of the oldest representations of the Swiss coat of arms.

Locarno has partnerships with the following cities:

Political communities in the Locarno district