Domodossola ( Lombard Dòm , Walser German Döm ; outdated German Duhm or Domo ) is a town in the province of Verbano-Cusio-Ossola in the Piedmont region . The city is the capital of the Ossola Valley ( Eschental , Val d ' Ossola ).

The town with Roman origins is located on the Toce in the center of the Val Ossolane (Ossola Valley) on the route from the Simplon Pass to Lake Maggiore , in a valley widening into which various side valleys flow, on a large alluvial fan , the Bogna, the right tributary of the Toce, heaped up here. In ancient times, Domodossola (after the Lepontians ) was called Oscella Lepontiorum , later Domus Ossulae . Due to its strategic location on the pass road, it was an important center early on.

As the largest Italian city whose name starts with "D", Domodossola is in Italian spelling alphabet used for this letter ( "D come Domodossola" ).

Domodossola is already mentioned by Ptolemy as Oksela Lepontiorum. In the Roman Empire, the place was the end point of a road from Milan to the upper reaches of the Toce, the Via Mediolanum-Verbannus, and the starting point for crossing the main Alpine ridge into Valais via the Simplon and Albrun passes . The city ​​was fortified under Theodoric's rule . In the Middle Ages, finally in 1014, the bishops or bishop-counts of Novara gain territorial rule over Domodossola and the entire Ossola region. In the dispute between Ghibellines and Guelphs , the Ossolans come under the protection of the Dukes of Milan in 1381 ; H. the Visconti and later the Sforza . After Ludovico Sforza's defeat by France in 1500, the Ossola Valley fell to Spain, and in 1714 - as a result of the War of the Spanish Succession - to Austria. Napoleon conquered the region in 1796, at the Congress of Vienna it came back to Austria as part of the Kingdom of Lombardy-Venetia . After the Sardinian War , the Ossola Valley fell to Sardinia-Piedmont in 1859 and was subsequently merged into the new Italian state in 1861 .

The importance of the city as a traffic junction developed with the infrastructural innovations in the 19th and 20th centuries: the expansion of the Simplonstrasse under Napoleon and, above all, the construction of the Simplon tunnel for the railway (1905).

On September 10, 1944, Domodossola became the capital of the 44-day partisan state, Repubblica dell'Ossola . In the area between Domodossola, Cannobio and the Swiss border, the partisans had succeeded in driving out the fascist troops and proclaiming their own republic. From October 19, however , the Germans quickly advanced again from Cannobio and a few days later declared the Repubblica to be over. 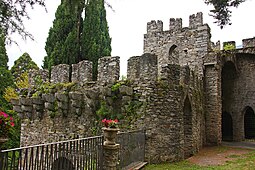 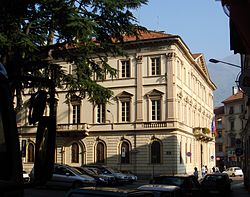 With the opening of Simplonstrasse by Napoleon in 1805, the city began to grow. The railway connection to Novara in 1888 and the construction of the railway through the Simplon Tunnel (1906) brought the city further growth. The Domodossola station located at the railway line Milano-Domodossola herein as Simplon route (Domodossola-Vallorbe) in the direction of Brig is continued and the railway line Ribellasca-Domodossola , this is the part of the Italian Centovalli web .

Domodossola is also on the SS 33 , which connects the Ossola Valley with the A26 .

Domodossola's twin towns are Brig-Glis in the Swiss canton of Valais on the northern side of the Simplon route and Busto Arsizio in Lombardy .