Brig-Glis is a political municipality and a civic community with a civic council in the Swiss canton of Valais and the capital of the Brig district as well as a parish of the Brig dean's office . The municipality forms the economic center of the German-speaking Upper Valais and was Alpine City of the Year 2008. 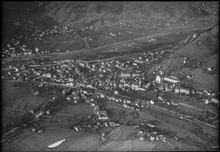 As part of Europastraße 62 , main road 9 , which has been developed in sections as Autobahn 9 , runs through Brig-Glis, going south from the municipality up to the Simplon Pass and then on to Italy. Main road 19 branches off from this road in the western area of ​​the municipality and runs northeast over the Furka Pass into the Rhine valley in the canton of Graubünden .

The Glacier Express route ( St. Moritz - Zermatt ) leads through Brig-Glis and the Simplon tunnel from the train station in the direction of Italy .

Brig-Glis consists of Brig , Glis (with the hamlet of Gamsen ) and Brigerbad . The neighboring communities in the Brig district are Naters , Termen , Ried-Brig and Simplon and in the Visp district Lalden , Visp and Visperterminen . With the first three of these communities, it is an agglomeration of around 30,000 inhabitants.

The community of Brig-Glis was created on January 1, 1973 from the merger of the former communities of Brig, Glis (with the hamlet of Gamsen) and Brigerbad. Since then, her face has developed significantly thanks to the brisk construction activity, especially in the Glis district.

As early as the Middle Ages, the Saltina had regular floods, which repeatedly led to devastating floods. The last time the Saltina overflowed its banks in 1993, when the enormous amounts of water built up on the Saltina Bridge and flooded the city center up to the train station. The attachments towered up to 3 m high at the train station. The problem was alleviated in 1997 with the commissioning of a lift bridge. The system proved itself during the floods in 2000.

Since the merger in 1973, the council has consisted of eleven members. The number of seats was taken over from the former municipality of Brig. Following the local council elections in 2004, the council was reduced to seven members.

Description : A goldgebordetes red shield with three pole made golden six-pointed stars as a shield is located on a rotbewehrten and -gekrönten black eagle on a red arrow with tail in the golden shield.

Brig-Glis is the center of the German-speaking part of Upper Valais. The village of Brig at that time received this role through the construction of the Simplon Tunnel , which was inaugurated in 1906 as a connection to the European rail network. Brig thus became a focal point for service companies, from freight forwarding at the beginning of the 20th century to the SBB's "virtual train station" in today's Brig-Glis , a call center from which information and tickets are issued worldwide via electronic communication channels become.

Around 80% of the population work in the service sector. The industry consists of just one larger operation, the Société Suisse des Explosifs  (SSE) domiciled in Gamsen , a former explosives factory that is now a diversified chemical company.

Important facilities are the Keller-Theater, the Zeughaus Kultur, the knight's hall in the Stockalper Palace and the Grünwaldsaal in the Valais media library . Events are also regularly staged in the Simplonhalle (congress center).

In 2006, both cities honored the centenary of what used to be the longest railway tunnel in the world. For this purpose an organizing committee was set up under the patronage of the two city councils, which accompanied the celebration with a number of activities. One of them is the town twinning of Brig-Glis and Domodossola , which allows an old connection to flourish again. Today a year-round open Simplon Pass and the train connection through the Simplon Tunnel ensure cross-border traffic.

A town partnership has existed with the town of Langenthal in the Bernese Oberaargau since summer 2001. Although Langenthal, in contrast to Brig-Glis, is an industrial city, there are a number of similarities: On the one hand, both form a regional center, on the other hand, water plays a major role in both cities. Both cities can also boast a remarkable carnival tradition.

From 1858, many people from Upper Valais emigrated to Argentina , where they were assigned arable land in the province of Santa Fe. From this the colony of San Jerónimo Norte developed with 7500 inhabitants, who mainly descended from immigrants from Upper Valais. They never completely lost their connection to their old homeland and the German language. Since 1991 the contacts have intensified through mutual visits until a partnership was signed with the municipality of Brig-Glis in 2015. In addition, three of the first five families to emigrate to Argentina were from Brig and the surrounding area. During their visit, the delegation from the city council brought a replica of the medieval Madonna statue in the Glis Church to Argentina, which is supposed to symbolize the solidarity across the Atlantic. Just one year later, in 2016, a team from FC Brig-Glis took part in an inter-American tournament in San Jerónimo Norte in order to maintain the partnership on the sporting level.

Political communities in the Brig district