The Swiss autobahn 9 and autostrasse 9 , also known as the Rhone autobahn in Valais , is part of the national road  9, which leads from Ballaigues on the French border via Lausanne , Vevey , Sion , Brig over the Simplon Pass to Gondo on the Italian border.

The A9 begins in the Jura and ends in the Alps . It begins as a car road at around 800  m above sea level. M. and leads through the valley of the Orbe in Orbe plain , where she served as motorway to the A1 meets. The motorways separate near Lausanne; the A9 runs east and north around the city. It leads high above Lake Geneva in Lavaux to Vevey, where the A12 branches off to the north. Along the mountain above Montreux it goes into the Rhone Valley , where at Villeneuve VD at around 380  m above sea level. M. is the lowest point of the route. At Saint-Maurice VS , it first crosses the Rhone and thus changes from the canton of Vaud to the canton of Valais . As the main traffic axis for road traffic in Valais, it leads the entire Rhone Valley up to shortly before Brig. From Glis the road winds as a car road over the Simplon Pass and goes up to around 900  m above sea level. M. into Hauptstrasse 9 , which from there is part of Nationalstrasse 9 ( Nationalstrasse 3rd class ).

Numerous engineering structures had to be built along the entire route. This includes many tunnels , especially in Upper Valais and on Lake Geneva. The viaduct above Chillon Castle is characteristic of the landscape . 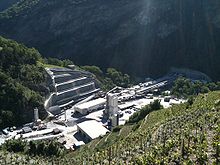 Major construction site for the Visp bypass (May 2010)

The Siders - Gamsen line , more than half of which will run underground, is still under construction. This 31-kilometer section of the route will cost 2.27 billion francs and is financed 4% by the Canton of Valais and 96% by the federal government. The entire Upper Valais section should be operational after several delays after 2030 ( Pfynwald ). It also includes the Visp southern bypass. The eastern section with the 4.2-kilometer Eyholztunnel , the longest tunnel on the A9, opened in April 2018. The western part with the Visp tunnel is to be gradually put into operation between 2022 and 2024.