Official road sign for a motorway junction in Switzerland

A motorway triangle is a three-armed, elevation-free traffic junction at which one motorway joins another.

In terms of road traffic law, the term Autobahn triangle only exists in Germany (symbol

, short name: AD). In the GDR and the German Reich, a triangle was called a branch . Neither in Switzerland nor in Austria , there is no distinction between triangles and crosses: In Switzerland these are referred to as motorway junctions (symbol:)

, in Austria as nodes. When the symbols for intersections were introduced on the motorway signs, no distinction was made between cross and triangle in Germany either.

If there is no connection between two of these arms, one speaks of a motorway fork . In Germany, it used to be called "Autobahn junction", where this term is more appropriate and is still the correct technical term there.

Motorway triangles are located where one motorway ends and joins another or where its course is interrupted. In the latter case, it is indeed a triangle, but here mostly, at least in part, a motorway junction is built and the junction is already referred to as a motorway junction. This means that if the motorway continues to be built, it can be put into operation without major structural effort and without renaming.

There are three basic forms of motorway triangles, as well as one that corresponds to an unfinished motorway junction. All forms have advantages and disadvantages in terms of economy, traffic volume, space requirements and safety. 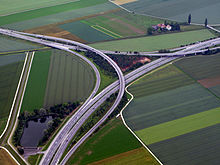 With this design, all left-turning lanes are guided semi-directly in a large radius. This enables high speeds. There are two variations of this triangle, depending on the intersection of the ramps: with three individual throws in two floors or with two throws in three floors, which is also known as a half Maltese cross .

The use of this design is particularly useful where there is high traffic density in all directions. In Germany, it is mainly to be found in areas with heavy traffic. In Austria it is the most frequently used shape, in the USA it is very common and the design common on highways in metropolitan areas.

Examples of this design in Germany

Examples of this design in Germany with almost no bridge

Example of this design in Austria

Examples of this design in other countries

Triangle without a single main direction

In the guidelines for the construction of motorways (RAA) a "triangle without a uniform definition of the main carriageway" is defined. This is a height-free, three-armed traffic junction, which consists of three forks , whose respective overpass structure only crosses one lane in the opposite direction, creating a TOTSO or a left-hand exit opposite the branching road in the main direction . Gaps are created between the directional lanes. The design is available several times in the USA. One example in Germany until 2007 was the junction on the yellow B7 motorway (Brussels street) to Düsseldorfer Straße in the west of the Oberkassel district of Düsseldorf . 51 ° 14 ′ 3 ″  N , 6 ° 43 ′ 57 ″  E51.234166 6.732622

With the so-called “trumpet”, one lane turning left is guided semi-directly and one indirectly. This design is inexpensive because only one bridge structure is necessary and relatively little area is required. However, the maximum speed in the indirectly guided connection ramp is low. Because of its simple design, the trumpet is also suitable as a motorway junction if the feeder ends at the junction. The free-flowing traffic due to the freedom of height does not entail any additional costs for the bridge structure, as there is no interconnection.

There are two variants of the trumpet: the right-hand and the left-hand one. The trumpet is often to be found in Germany, but the right-hand one is less common, as the traffic has to be guided into the narrow radius of the loop without an upstream delay lane, which has a negative effect on road safety. Therefore, this design is preferably only implemented if the space available does not allow any other design. 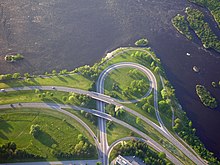 Examples of the trumpet design in Germany : 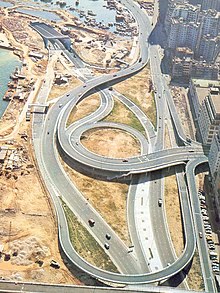 In the case of the melted-down trumpet, in contrast to the trumpet, the continuous direction of travel is spatially separated from the flowing traffic route in order to connect the flowing traffic by interlacing. This creates connections on the left (when driving on the right ). After a turning loop, the opposite direction is again linked by interlacing. The interconnections lie outside of the bridge structure and are the only capacity limit for a single-lane design. This design requires the smallest bridge area, but more space. Only one lane needs to be bridged by another. Technically, this is an internally fed, disentangled, teardrop-shaped turbo roundabout that does not interrupt the main directions, or a motorway fork without a main direction with a subsequent left-hand turning loop, which saves additional expensive space within the overpass. The turning loop is similar to the Michigan Left . Another approach to the description is the expansion of a fork into a triangle by spatial separation of the directional lanes. In the west of the US state of Texas, Interstate 20 ends at Interstate 10 at 31 ° 5 ′ 25 ″  N , 104 ° 3 ′ 9 ″  W in this design. There are several transport hubs of this type in Florida . 31.09028 -104.052385

Two trumpets are used when two motorways or motorway-like roads come very close, but do not cross each other or only cross at another point, or when a connection is subsequently created. In this case, a short motorway-like connection piece is inserted, creating two three-armed nodes (trumpets). In this case, the mouthpieces of the trumpets are directly connected to each other. Opposite a cross, the two T-pieces form an H-shaped connection with 4 arms. This is preferred in Italy, Japan and the USA to connect toll roads with toll-free roads. The vehicles are mixed according to their destination, but sorted by entering and exiting the toll road. Examples of double trumpets are:

A special form of the double trumpet with no direct ramps is the paper clip . The indirect trumpet is related .

There are also double trumpets whose funnels lead onto the same motorway. This could be the design for a motorway junction, if the exit ramp of a branching motorway can be attached to the left or two motorways end at the continuous one. Since the ears lie one inside the other with two directions of travel, considerable space is saved. 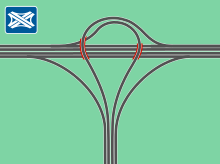 In the case of a pear-shaped motorway triangle, the counterpart to the turbine , both lanes turning left are guided semi-directly. This makes it possible to drive through at high speed, but also requires more space than the trumpet, and two bridges are necessary.

This type of construction is rarely found in Germany, as it has no major advantages over the other variants in terms of costs or space requirements. As a pear was z. B. the motorway triangle Braunschweig-Südwest ( A 39  / A 391 ) built until 2011. The new shape of the triangle is also based on the pear. The Bochum-West motorway triangle, which opened in June 2015, is also based on the shape of the pear, but here one of the semi-direct ramps is located outside the direct ramps. 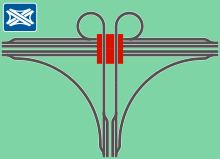 "Trumpet", before the expansion into a full clover leaf, used at the motorway junctions Ratingen-Ost , Dortmund-Nordwest and at the Seligenstädter Dreieck

The half clover (also part of clover , Switzerland eye ) is a special case under the highway triangles. It is only present when an expansion is planned motorway junction as clover already in construction. The entire state of development is normally designed in such a way that an extension to a complete motorway junction is possible without having to convert the existing structures. Most of the time, only those direct and indirect connection ramps that are actually used are completed. The central bridge structure, however, is fully expanded. Opposite the trumpet, the half-leaf clover has an interwoven stretch .

There are many examples of this design in Germany . They are a clear indication of the planned - and partly rejected - continuation of the motorways. In contrast to other variants of motorway triangles, they usually already have the name motorway intersection: