This article explains the Swiss community. For the writer see Elke Naters .

Naters ( Valais German : Natersch ) is a political municipality and a civic community with a civic council in the Brig district and a parish of the Brig dean's office in the Swiss canton of Valais .

Naters is connected to the national road network of the A9 via Hauptstrasse 19 . From Brig train station , the center of Naters can be reached within five minutes on foot or by bus.

In 1079, King Henry IV gave Naters to the Bishop of Sitten for ever. Naters was previously owned by the St-Maurice monastery . The document in which Naters (written as Nares) is mentioned in writing for the first time is a gift from the Burgundian king Rudolf III to the monastery of St. Maurice.

The lords of Ornavasso built the Ornavasso Tower in 1250. Relations with the northern Italian municipality of Ornavasso are maintained through regular meetings to this day. After the uprisings of the Upper Valais nobility, Naters got hold of the tens .

Until the first half of the 14th century, the Zehnden Naters was divided into Gumperschaften : Naters, Rischinen , Mund , Brig , Brigerberg , Simplon and Zwischenbergen . Naters was the capital of the Brig district until 1518 , which can be attributed to the proximity to the bishop and the ecclesiastical power at that time. Naters was replaced by Brig when the Simplon route became an important trade route.

From November 1, 1755 to March 7, 1756, Naters was shaken by severe earthquakes several times. Many buildings, including the church, were badly damaged. The war against France of 1798/1799 also affected Naters: 24 men were killed in action. Many residents fled the place. The French looted many houses and burned hamlets in the vicinity of Naters.

In the 19th century, around a quarter of the then residents of Naters emigrated in the hope of a better life, mainly to South America.

With the start of construction of the Simplon tunnel and the Lötschberg line , the upswing began in Naters. At the beginning of the 20th century the population increased sharply. Numerous Italian guest workers settled down. Even today, Naters maintains close relationships with the region near the border in northern Italy and especially with the sister community of Ornavasso.

Between 1960 and 1970, like the whole of Valais, Naters experienced unexpected economic development. The population increased by 45% to 5,517 during this period. Today Naters is the second largest municipality in Upper Valais.

Around 80 Swiss Guardsmen came from Naters over the past 120 years . Naters is the municipality in Switzerland with the most guardsmen.

On September 26, 2010, both the members of the resident communities and the civic communities approved the merger of Naters with Birgisch and Mund with a large majority. The merger took place on January 1, 2013, the merged municipality bears the name Naters.

The old part of the village of Naters has many historically valuable buildings. The oldest are the Catholic parish church of St. Mauritius with a steeple (12th century), the parish (1461) and ossuary (1514 - one of the largest in Switzerland), the Ornavassoturm (1250), the Zendenstadel (1650) and the castle «Uf der Flüe» (1701).

Also worth seeing are the fountain sculpture Sonnengesang by ew bregy and the old linden tree. 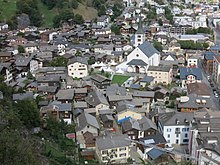 The architecturally remarkable World Nature Forum has been presenting the UNESCO World Heritage Swiss Alps Jungfrau-Aletsch as a visitor center since September 2016 .

The historical village tour is limited to the old village center. It starts and ends in Judengasse. Some of today's buildings have older core structures. The first mention is marked with * in the year:

The classic 18-kilometer hiking trail on the Lötschberg southern ramp from Hohtenn to Lalden has been extended by five kilometers to Naters and runs on a new path above the BLS railway line. Since 2009 the hiking trail has been called "Lötschberger".

Political communities in the Brig district