The title of this article is ambiguous. For further meanings see Moritzkloster .

The following important information is missing from this article:
Architectural description mainly of the basilica
Help Wikipedia by researching and pasting it .

The Abbey of Saint-Maurice ( French Abbaye de Saint-Maurice d'Agaune ; Latin Territorialis Abbatia Sancti Mauritii Agaunensis ) is a monastery of the Augustinian Canons in Saint-Maurice , Canton of Valais , Switzerland . It is considered to be the oldest monastery in the West that has existed without interruption. In 2014/2015 the abbey celebrated its 1500th anniversary.

In addition to the monastery, the abbey is also a territorial abbey with an area of ​​almost 100 square kilometers. It has comprised the parishes of Finhaut, Vernayaz, Salvan and Saint-Maurice / Mex since 1993, and from 1933 onwards it also included the parishes of Choëx and Lavey-Morcles, which in 1993 were added to the diocese of Sitten. The origins of the abbey go back to a sanctuary that was erected over the grave of Saint Mauritius (German: St. Moritz) and his companions from the Theban Legion , who allegedly suffered martyrdom with him towards the end of the 3rd century AD has been. The sanctuary was at the old Roman military base Agaunum . 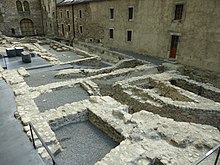 Foundation walls of the predecessor churches 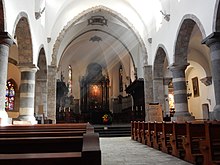 Interior of the abbey church

The abbey in a model of the village of Saint-Maurice 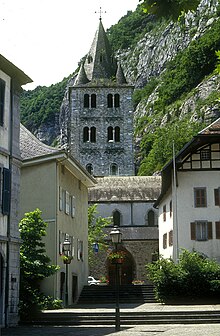 View of the abbey church

Saint Theodor , Bishop of Octodurus (Martigny) , transferred the relics of the martyrs around 380 into the large caves at the foot of the rock gate through which the Rhone leaves the Valais. As a result, Agaunum developed into a Christian pilgrimage site. St. Sigismund , son of the Burgundian king Gundobad , founded the monastery, which still exists today, on September 22, 515, and St. Abbot Ambrosius (516-520) built a new basilica over the original sanctuary . In the 9th century the monks were canons replaced and in 1128 they took over the Rule of St. Augustine .

In the decades after its foundation, the Abbey of Saint-Maurice under Sigismund became the most important abbey in the Kingdom of Burgundy . The characteristic liturgy of laus perennis , the everlasting hymn of praise, practiced there , was an innovation for Western Europe at the time, as it was adopted from the Byzantine Empire . From Saint-Maurice, this practice spread throughout Western Europe. In order to keep the everlasting hymn of praise going, a large number of monks were necessary, which is why Sigismund furnished the monastery richly and sent numerous monks from the rest of the kingdom to it. In 961, the later Emperor Otto I moved the relics of St. Mauritius to the Cathedral in Magdeburg , which dealt a severe blow to the attractiveness of the abbey for pilgrims.

The oldest foundations in Martolet date from Roman times . The function of the buildings erected with a conspicuously sloping orientation compared to the more recent buildings has not been clarified, nor is the relationship to the ancient spring system further to the west. At the foot of the rock, a small south-facing building was built in which burials took place. A construction commissioned by Bishop Theodor towards the end of the 4th century to bury the bones of the martyrs would be conceivable. Next to it was a rectangular building with an annex on one short side. This building was initially interpreted as the dwelling of a religious community, but investigations from 2001 indicate a first sacred building . These first two buildings were followed by a series of newly built churches and chapels, which were initially built parallel to the rock face.

The foundations of the so-called Sigismund Church, which probably dates from the early 6th century, are archaeologically recorded. In 575 it was destroyed by invading Lombards and subsequently rebuilt. The construction phase from the 7th century, known as Gontran Church, shows a significant increase in the size of the building; The polygonal apse and the entrance that led to the west entrance with a monumental staircase have been preserved . In the 8th century a new complex was built, a basilica , which is associated with the abbots Willicarius and Altheus. It had a choir on each of the two narrow sides . In contrast to the previous buildings, which had been geosted , their crypt was under the west choir. The relics of St. Mauritius were also kept here.

Empress Adelheid , who also paid a visit to the abbey, donated the bell tower at the end of the 10th century, which was built on the site of the east choir and still towers over the monastery today. From the 11th century it served as the entrance to the newly built Romanesque church building. Two chapels were built between this entrance tower and the rock in Gothic times.

In 1148 Pope Eugene III consecrated the new church. In the following centuries, however, the building was repeatedly endangered by rockfalls, including in 1611. Subsequently, from 1614 to 1624 a new church was built, which was rotated by 90 ° compared to the old system, so that the newly built nave runs from north to south, at right angles to the monastery complex. In 1693 a fire devastated numerous buildings of the abbey, which were rebuilt at the beginning of the 18th century. On March 3, 1942, a rock fall destroyed the church tower, the vestibule and the organ. The reconstruction took place from 1946 to 1950 under the direction of the architect Claude Jacottet, the stained glass windows were made by Edmond Bille . In this context, the Romanesque cloister was also restored. On November 30, 1948, the church was opened by Pope Pius XII. for minor Basilica applicable, the consecration took place 1949th

Excavations on the site of the old church were led by the prior Pierre Bourban (1896-1920) and the Geneva professor Louis Blondel (1944-1945). Further work took place between 1994 and 1996. They brought to light several floors, painted graves and walls that were not recorded in the traditional documentation. From 2001, the previous findings were therefore checked.

The anniversary year of the abbey began on September 21, 2014 with the opening of a tour to visit the cultural heritage site. It leads from the basilica via the archaeological site, the catacombs and the new hall of the monastery treasury to the monastery. "With the help of light panels, interactive screens, models and 3D films, the story of a [...] religious community is told which testifies to a spiritual and cultural activity that is unprecedented in the Christian West". Visitors can see the history and development of the abbey under a 1200 m², translucent roof to protect the ruins.

Saint-Maurice is home to one of the richest ecclesiastical treasures in Europe, which was mainly acquired through donations from the faithful. Among other things, it includes valuable vessels such as a piece of sardonyx that dates back to the 1st century BC. And a golden water jug ​​that was given to the abbey by Charlemagne . There is also a golden monstrance and various other objects for cultic use.

A large part of the monastery treasures are the reliquaries and shrines for keeping the relics, such as the head reliquary of Saint Candidus , which was made around 1165. The following shrines should be mentioned:

Almost all of the pieces have remained intact despite the repeated destruction of the church buildings and some are still in liturgical use. As part of the anniversary celebrations, the monastery treasure was exhibited in the Louvre in February 2014 .

Coat of arms on the town hall of Saint-Maurice

Abbey coat of arms of Saint-Maurice

The abbey does not belong to any diocese and enjoys the status of a territorial abbey : the abbot exercises his own jurisdiction over the 68 clerics associated with the monastery and the approximately 6,574 believers on a territory of 9,685  hectares . The Abbot of Saint-Maurice is also the head of the Augustinian Canons Congregation of the same name and a member of the Swiss Bishops' Conference .

Dioceses and abbeys in the Swiss Bishops' Conference