This article deals with the mineral onyx. The sedimentary rock, also commonly known as onyx, is called onyx marble .

Onyx [ ˈo: nʏks ] is an opaque to slightly translucent, two-tone black and white layered, fibrous variety of chalcedony , which in turn is a variety of the mineral quartz . Agate is a similar but multi-colored variety.

Onyx marble (marble and onyx or marble-Onyx), however, is a yellow, brown or green limestone - sintering - rock , which is often misleading occupied by the abbreviated designation Onyx.

Real onyx is only processed into gemstones .

Into German the name Onyx was in the Middle Ages through the Latin from the Greek borrowed where ὄνυξ (Gen. ὄνυχος) " fingernail " or " claw " means. Related to the Greek word are in Latin unguis , in Old High German Nagal , in Lithuanian Naga and in Sanskrit नख (Nakha) . Common to all of these Indo-European languages ​​is the meaning of claw, claw, horse's hoof and fingernail.

Other two-tone banded varieties are the Sardonyx (also Sard-Onyx) with brown-white and the carnelian (also Sarder) with red-white banding. Since the brown of the sardonyx often plays into the black, it is often difficult to distinguish between onyx and sardonyx. 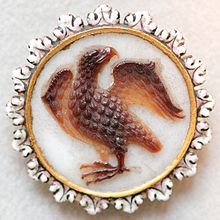 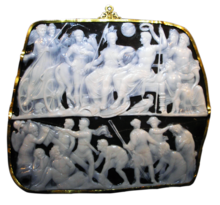 Due to the high demand, which cannot be met by the natural occurrence, a large part of the onyx available on the market is counterfeit. Either the porous agate is colored or gray layers of the chalcedony are immersed in an acid bath. Sometimes the shiny black obsidian is also polished. The result is a matt, deep black color. With onyx, it is extremely difficult to distinguish real from fake and basically only possible through a mineralogical examination. However, if a stone is streaked with white, it can be assumed to be a real specimen.

Already in antiquity, but also in the Middle Ages, various precious stones and gemstones were associated with known planets and constellations and used as amulets or healing stones with magical properties. This type of use also lives on in esotericism , but an assignment is purely arbitrary and differs from author to author. For example, onyx and sardonyx are assigned to Mars according to Richardson and Huett (1989) , according to Ahlborn (1996) the sardonyx to Jupiter and according to Uyldert (1983) the onyx to Saturn .

A large number of zodiac stones are also used for the signs of the zodiac. Depending on the source, the onyx is mainly assigned to the ibex , but also to the twins or the lion and the sardonyx to either the virgin or the Libra . Since the zodiac stones were and are also regarded as birthstones, many gemstones are also assigned to specific months. However, the connection is arbitrary and is rarely related to the corresponding signs of the zodiac. This is particularly clear with the onyx, which, depending on the source, is assigned to February or August (Capricorn December 22 - January 20; Gemini May 21 - June 21; Leo July 23 - August 23).

As a healing stone, onyx is said to alleviate or heal, among other things, eye infections and diseases of the toenails, according to various esoteric writings. However, there is no scientific evidence for the supposedly healing effects.