The Virgin ( Latin Virgo , astronomical signs ♍) is a constellation on the ecliptic .

Virgo is the second largest constellation in the sky (after the water snake ). It lies between the lion (Leo) and the scales (Libra). The brightest stars are supposed to represent a person lying down.

The brightest star is Spica with an apparent magnitude of 0.98 mag. Spica can be found in the extension of the drawbar of the Big Dipper over the bright Arcturus in the constellation Bearkeeper .

In the constellation Virgo is the huge Virgo galaxy cluster , which contains about 2000 galaxies . Several of the galaxies can already be observed with small telescopes . 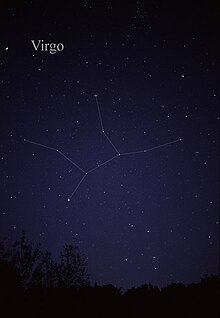 The constellation of Virgo as seen with the naked eye

Eric Burrows assumes ( Oxford , 1926) that the change in meaning from furrow to virgin took place via a Hurrian word sala , virgin. So Šala was a goddess of pre -Semitic Syrian ( Hurrian , subartisch , mitannisch ) was and the word Šala latest by the Greeks as Virgin been taken. In the cuneiform tablets , the constellation was always referred to as ab-sim (= vegetation) or similar but never as a virgin or a similar word.

The entire constellation of Virgo had around 2700 BC. On August 29th and around 1900 BC. Its heliacal rise on September 6th in Mesopotamia. Further connections of the constellation are made to Ištar , Isis or Cybele .

A wide variety of interpretations existed among the ancient Greeks . So one saw in the constellation Athena , Hera , Persephone , Callisto , Dike , Astraea or Erigone .

The virgin is one of the 48 constellations of ancient astronomy described by Ptolemy .

Tablet with Epic of Gilgamesh.

The following versions have come down to us from classical Greek mythology :

The constellation is said to represent Persephone , the daughter of the grain and fertility goddess Demeter and of Zeus . The original name Persephones was Core . She was made pregnant by her own father and then ignored. Hades , the brother of Zeus and god of the underworld, fell in love with her and kidnapped her when she was in Sicily. He took her as his bride, what Zeus allowed, and named the unfortunate Core Persephone . Demeter became so desperate that she forgot to keep up with her duties, causing crops to fail and famine to break out. She also cursed the fields of Sicily. Zeus could not save her from this fate, but only made an agreement according to which Persephone had to spend half of the year with her husband Hades, and the other half was allowed to return to the surface.

Dike (daughter of Themis and Zeus)

According to another source, the constellation embodies the goddess Dike , daughter of Themis and Zeus. Dike lived on earth at a time when there was no war or violence and the earth was like the Garden of Eden . However, when mankind became angry, it fled to the mountains and finally to heaven. Dike is also called the daughter of Helios , Kronos or Nomos and Eusebia.

Astraea (daughter of Themis and Zeus)

But it should also be about Astraea , the virgin daughter of Themis and Zeus . She embodied justice. Because of the injustice among the people, she returned to heaven disappointed. Next to her is the constellation Libra , as a symbol of justice. Astraea is also identified as Dike and vice versa.

In another version, the constellation represents Erigone , and is in connection with the neighboring constellations bear keepers and hounds . The god Dionysus taught Ikarios , the father of Erigone, the art of wine growing. Ikarios wanted to sell his wine to the people and gave it to some farmers to taste. They had never drank wine before and killed Ikarios because they thought he was trying to poison them. Erigone finally went to look for the father with the dog Maira . His dog found the place where he was buried, and out of grief, Erigone hung herself from a tree. The dog also died of grief and was transferred to heaven. Ikarios found its way into the heavenly realm as the bear guardian constellation.

Spica is a multiple star system 272 light years away . The main star is a white giant star with 13,500 times the luminosity of our sun. The star pulsates weakly over a period of 0.174 days, changing its brightness slightly in the process. At a distance of 0.12 astronomical units , a smaller companion star orbits the main star in about four days. Due to the short distance, the star is not visible in the telescope . With each orbit, the weaker companion passes in front of the bright main star, causing the brightness to decrease slightly. Spica is thus an eclipsing binary . The main star is orbited by at least two smaller companion stars that cannot be observed with optical telescopes either.

Gamma Virginis (γ Virginis) is a binary star 39 light years away . The two stars of roughly the same size and brightness orbit each other in around 170 years. The angular distance changes relatively strongly during one revolution. In 1920 the greatest distance was reached with 6.2 arc seconds and the stars could be observed with a small telescope. In 2005, the smallest distance was achieved and the stars were only 0.3 arc seconds apart, which made a larger telescope necessary to resolve the components.

R Virginis is a variable star of the Mira type . Its brightness changes significantly over a period of 145.5 days

The Virgo Galaxy Cluster is about 60 million light years away. About 250 of its members can be observed with a medium-sized telescope from 15 cm aperture. The French astronomer Charles Messier included 11 galaxies in his catalog of foggy objects.

M 49 was the first discovered galaxy in the Virgo cluster. Messier found it in 1771 . M 49 is the brightest object in the galaxy cluster. It can already be seen as a misty spot in prism binoculars . It is an elliptical galaxy . These are huge systems that were created by merging several galaxies. Elliptical galaxies contain relatively little interstellar matter and have no spiral structures.

The spiral galaxy M 61 also belongs to the Virgo galaxy cluster. In a small telescope it appears as a misty spot. Spiral structures are visible in larger telescopes.

With an estimated mass of around 800 billion solar masses, M 84 is one of the most massive galaxies we know. It is also a powerful cosmic radio source .

M 87 is also a powerful radio source known as Virgo A. Long-exposure photographs show a jet of matter shooting out of the core of the galaxy.

The spiral galaxy M 104 , 50 million light years away , does not belong to the Virgo cluster. We see the galaxy from the side. A dark band of dust becomes visible in the middle telescope. The galaxy has roughly the shape of a hat, which earned it the name “Sombrero Galaxy”.

The quasar 3C 273 is the core of an active galaxy located 2.5 billion light years away. It can already be recognized as a star in telescopes from 10 cm aperture.