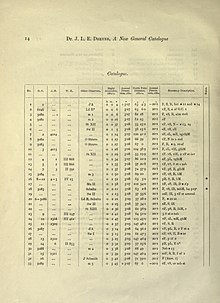 The New General Catalog of Nebulae and Clusters of Stars ( NGC ) is a catalog of galactic nebulae , star clusters and galaxies that was created at the end of the 19th century and is still considered a standard work today. It was compiled in the 1880s and published by Johan Ludvig Emil Dreyer in 1888 ; An important basis were the systematic sky surveys and special observations by Wilhelm Herschel . In 1895 and 1908 the NGC was expanded to include the two index catalogs IC I and IC II. The NGC contains 7840 entries, including most of the Messier catalog . In contrast to this, the objects in the NGC catalog are arranged according to right ascension . It contains objects from the northern and southern skies. However, the catalog contains individual errors - e.g. For example, some objects are included several times under different catalog numbers or have been included again in one of the index catalogs. The attempt to eliminate these errors was initiated in 1993 by the NGC / IC project, after partial attempts with the Revised New General Catalog (RNGC) by Jack W. Sulentic and William G. Tifft in 1973 and NGC2000.0 by Roger W. Sinnott in 1988. A complete revision of the NGC and the associated index catalogs was created by Wolfgang Steinicke in 2009.

The NGC is popular with amateur astronomers because it contains many objects that can still be observed with amateur telescopes .

A few “foggy” spots and star clusters in the sky had been known since ancient times, such as the Pleiades and χ Persei , or since the Middle Ages, such as the Andromeda Nebula . By using telescopes to observe the sky, more and more details of the starry sky could be seen that were invisible to the naked eye. Some nebulae have been resolved by improving technology and using larger telescopes, such as B. Globular clusters . Other objects such as B. the Orion Nebula or the Andromeda Nebula could not be resolved into stars. Astronomers tried to catalog the foggy spots, such as B. Messier, who compiled a list of objects to distinguish them from comets. With their ever better telescopes, astronomers such as Wilhelm Herschel, John Herschel and W. Parsons created their own catalogs to document their discoveries.

Wilhelm Herschel , the famous discoverer of the planet Uranus , began at the end of October 1783 to systematically search the sky for non-stellar objects with a self-made 18.7-inch reflector. The Catalog of Nebulae and Cluster of Stars (CN) was first published in 1786 by Wilhelm Herschel in the Philosophical Transactions of the Royal Society of London. In 1789 he added another 1,000 entries and finally another 500 in 1802. This brought the total to 2,500. His sister Caroline Herschel discovered another 10 objects. At that time, texts and sketches were the only media used to record their impressions of the brightness and structure of an object. These records were very subjective and dependent on the particular talent and experience of the observer. In order to objectify the records, Wilhelm Herschel developed a standardized description. Wilhelm Herschel's catalogs had two major drawbacks: They were sorted according to the date of discovery. In addition, the position of an object was only given relative to a reference star, so there were no coordinates. This made it very difficult to identify an object, especially a newly discovered one.

John Herschel continued his father's work. In his observatory in Slough , he compiled the Slough Catalog (SC) between 1825 and 1833 . For his observations he used a reflector with an opening of 18¼ ″, which was completed in 1820. His intention was not so much to discover new nebulae and star clusters, but rather to revisit his father's three catalogs. The main objectives were to identify and determine the exact locations. 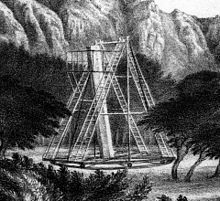 John Herschel's telescope for his observations in South Africa

In 1834 John Herschel and his family moved to Cape Town . He acquired the Feldhausen estate, where he carried out a similar survey of the southern sky over the next four years. There, at the Cape of Good Hope, he observed a total of 1714 objects between 1834 and 1838.

In 1864 the CN was expanded by John Herschel to the General Catalog of Nebulae and Clusters of Stars (GC).

Creation and publication of the catalog

Johan Dreyer was born in Copenhagen on February 13, 1852 . He came from a traditional family with close ties to the military. He began studying mathematics and astronomy in Copenhagen at the age of 17. Here he also heard d'Arrest lectures . After graduating, he moved to Parsonstown (now Birr ), Ireland, in August 1874 . There he became an assistant to Lawrence Parsons and had access to the world's largest telescope at the time, the Leviathan . For four years he was able to use this 72-inch reflector and the 36-inch reflector. His observations there mainly concerned nebulae and star clusters.

In 1882 Dreyer became director of the Armagh Observatory . His first work here was completing the Second Armagh Catalog of Stars of its predecessor. During his years in Armagh, Dreyer used its equipment to measure nebulae, stars, comets, double stars and other astronomical observations.

Discrepancies between John Herschel's General Catalog and the discovery of other nebulae led him to create his own extension for his own observations. He was interested in getting a complete picture of current observations on known or new objects. He assumed that not all of the data was actually published. So on November 11, 1876, he wrote a Request to astronomers that appeared in the Astronomical News a week later . This request included the request to send him unpublished data or information on errors in the General Catalog . He wanted to include the results that d'Arrest published in the Siderum Nebulosorum catalog in an extension of the General Catalog. The General Catalog Supplement (GCS) he created was published in The Transactions of the Royal Irish Academy in 1878 . It contained all known corrections to the General Catalog and added another 1172 to Herschel's 5079 nebulae. During the expansion of the General Catalog, Dreyer also worked on the compilation of the observation results at Birr Castle, which Lawrence Parson and his assistants made from the years 1848–1878. The work contains some of his sketches. All 90 objects found in these observations were recorded in the GCS. Lawrence Parsons published the result in three parts in the Scientific Transactions of the Royal Dublin Society in 1880.

Dreyer followed the further publications of other astronomers after the publication of the GCS. Further publications of observations of nebulae and star clusters by Lord Ross between 1848 and 1878, along with observations by other astronomers, led Dreyer to prepare a second supplement. He wrote a notice that he was collecting materials for a second supplementary catalog. This Notice of a new catalog of nebulae was published in the Astronomical News in 1885. Here he again asked for unpublished discoveries to be sent. However, the board of the Royal Astronomical Society surprisingly declined this addition. She asked him to merge all three catalogs into one. Dreyer compiled this new catalog within just two years. To his regret, it was necessary to re-number the entries, today's NGC numbers. This New General Catalog was published in 1888 as the Memoir of the Royal Astronomical Society .

A photograph believed to be taken in 1883 showing the north side of the Armagh Observatory buildings. Johan Dreyer worked here.

Almost 78% of the NGC entries are already in Herschel's General Catalog . Only 20 observations are directly attributable to Dreyer. 4000 observations were made by other observers. Dreyer's great contribution was to rigorously compare and check the results of the individual observers in order to have the most exact catalog possible. He published the NGC with 7840 entries in 1888. This last visually compiled catalog contains 7586 independent objects. Only one item in the catalog was photographically discovered.

Of the 7840 entries in the NGC catalog, 238 objects have two entries. An object occurs 16 times three times. There are a total of 7586 independent entries. Galaxies are most frequently represented in the catalog (79.5%), followed by open star clusters (9%) and emission and reflection nebulae (2%), globular star clusters (1.5%) and planetary nebulae (1.2%). A total of 5.2% are single stars or groups of stars, 0.4% relate to parts of other galaxies, these are mostly HII regions.

The apparent brightness of the objects averages 12.6 mag, the minimum is 16.4 mag.

Exactly 100 explorers contributed to the NGC. 26 of these date from the time before Wilhelm Herschel (1783).

A total of 71 telescopes were involved in the discoveries, 11 of which were reflectors with mirror diameters between 4.2 "and 72", 60 were refractors with openings between three and 27 ".

7814 entries were discovered visually, 22 objects were found by visual spectroscopy. The only photographic object is the Maya nebula NGC 1432 in the Pleiades, which the Henry brothers took in Paris in 1885.

Dreyer observed the release of new nebulae and star clusters with great attention. After the NGC was published in 1888, Dreyer and other astronomers collected corrections and supplementary data on the NGC objects. With the increased use of photography, many new non-stellar objects have been found. In order to keep track of things, Dreyer published two index catalogs ( Index Catalog of Nebulae and Clusters of Stars , IC I and IC II): The index Catalog I from 1895 contains 1529 objects that were found between 1888 and 1894. Most of the new objects in IC 1 were discovered by Stéphane Javelle (794), Lewis Swift (315) and Guillaume Bigourdan (134). The index Catalog II from 1908 contains 3857 entries on objects that were found between 1895 and 1907. These were discovered u. a. by Max Wolf (1117), Delisle Stewart (672), Stéphane Javelle (637), Royal Frost (454), Lewis Swift (270) and Guillaume Bigourdan (188). Dreyer used the opportunity in each of the index catalogs to include known corrections and additional data on the NGC entries. A list of corrections to the IC was published by Dreyer in 1912.

But even after the corrections made by the IC catalog, the New General Catalog still contained errors that could easily be reproduced. There was therefore a desire for a revised NGC that combines historical and modern data. The first attempts were made in 1977 and 1988, but neither was satisfactory.

The first catalog aimed at updating the original NGC was the Revised New General Catalog (RNGC) by Jack Sulentic and William Tifft, which was introduced in 1977. However, the attempt to improve Dreyer's work with modern data failed. Not only did the authors ignore the previously published fixes, but they also introduced a significant number of new bugs. For example, the well-known compact galaxy group Copeland Septet in the constellation Leo is described as non-existent in the RNGC. In addition, in places where an item could not be found (mainly due to incorrect positions), the closest 'anonymous' candidate was often assigned an RNGC number - without consulting the original data or published corrections.

The NGC 2000.0 (also known as the Complete New General Catalog and Index Catalog of Nebulae and Star Clusters ) is a compilation of the NGC and IC created by Roger W. Sinnott using the J2000.0 coordinates. It was released in 1988, exactly 100 years after the NGC. The catalog contains several corrections made by astronomers over the years. In this catalog, however, the positions of the NGC have been converted to epoch 2000 without further checking .

The Revised New General Catalog and Index Catalog (RNGC / IC) is a compilation by Wolfgang Steinicke from 2009. It is a comprehensive treatment of the NGC and IC catalog.