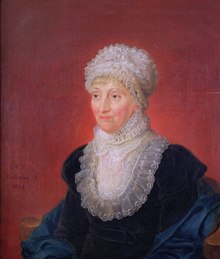 At the beginning of her scientific career she supported her brother Wilhelm Herschel in his research, but soon shone through independent achievements. Her most important contributions to astronomy were the discovery of several comets , the calculation of precise astronomical reductions and the catalog of zones of hundreds of star clusters and nebulae.

Caroline Herschel grew up as the only girl of the surviving children of the military musician Isaak Herschel and his wife Anna Ilse Herschel in Hanover. She had a sister who died as a toddler and four brothers. The father endeavored to give his children a basic musical education. But in the Herschel house there was not only a lot of music made, but also philosophizing and astronomy. In addition to Wilhelm Herschel, her brother Alexander Herschel also worked as a musician and astronomer.

Caroline wrote in her memoirs:

“My father was a great admirer of astronomy and had some knowledge of science. I remember that one cold night he took me out onto the street to introduce me to some of our most beautiful constellations after we had previously observed a comet that was just visible. " 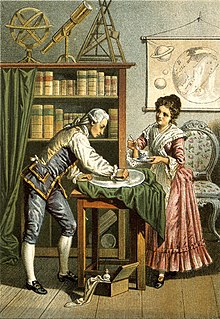 Every day she and her brothers attended the garrison school for a few hours so that she could learn to read and write, which at that time was not a matter of course for a middle-class girl. However, she spent many hours of the day against her will doing knitting, embroidery and all kinds of household chores. The mother said that she should be and remain a "raw block, but a useful one". The thought that - according to her mother's wishes - she should be trained as a seamstress and that a future as a mere household worker was imminent was unbearable for her. She wanted to lead a life that also made spiritual demands on her. Therefore, she adhered to the wishes of her father, who provided her and her four brothers with a musical education, in her case as a concert singer.

In 1772, at the age of 22, she followed her brother Friedrich Wilhelm Herschel , who was twelve years older than her to England , who was an organist and concert director in the prestigious Bath . He needed her as a housekeeper, but also wanted to give her the opportunity to escape the confines of the house, to continue her musical education and to perform as a soloist in his concerts. She soon rose to be the first singer in the oratorios performed by her brother , thereby gaining a certain reputation and taking on leadership roles in the choir . This led to the fact that she was offered an engagement at the Birmingham Triennial Music Festival , which she declined because she only wanted to perform under the direction of her beloved and revered brother.

Caroline now devoted herself to astronomy in addition to housekeeping and her appearances; for example, she helped Wilhelm make mirror telescopes . Their main job was to polish and grind the mirrors; Absolute accuracy was essential in this activity. In addition to practical activities, she dealt with astronomical theory. She learned the algebraic formulas for calculations and reductions as a basis for observing and surveying the sky.

Turn around with Uranus discovery

In 1781, while surveying the sky , her brother Wilhelm discovered the planet Uranus by chance , which made it famous beyond the country's borders. In addition to numerous honors, he got a job in the city of Slough as an astronomer from King George III. offered, which he gratefully accepted. Now he could devote himself entirely to his true passion.

For Caroline, the discovery of Uranus was another turning point in her life. She was faced with the choice between continuing her successful career as a singer in Bath or following her brother as a research assistant. She opted for the latter and got a job from the court as her brother's assistant with a salary of £ 50 a year. Now Caroline began her own exploration of the starry sky. She used a small Newtonian telescope to find comets. She discovered three remarkable nebulae in 1783 and eight comets between 1786 and 1797 , five of them with undoubted priority, including Encke's comet . In 1797 she submitted an index to John Flamsteed's observations to the Royal Society , along with a catalog of 561 stars that were missing in his British Catalog , as well as a list of errors in this publication.

She stayed at night with her brother at observation posts, noted the positions of the stars that he called to her from the other end of the giant telescope they had built themselves, evaluated and recalculated the nocturnal records, wrote treatises for the Philosophical Transactions , discovered fourteen nebulae, calculated Hundreds of them and began to compile a catalog for star clusters and nebulae, now called deep sky objects . In addition, she wrote a supplementary catalog to Flamsteeds Atlas , which comprised 561 stars, as well as a general register.

For this work she received the highest recognition, among others from Carl Friedrich Gauß and Johann Franz Encke . Even so, she remained the humble woman she always was. Your biographer Renate Feyl comments:

“Until the end of her life, she tries to point out any evidence of her own achievement as the merit of her famous brother. [...] She dares to know, but does not want to publicly admit this risk. She continues to emphasize how useless, how incapable, how unfit it is. This is her lifelong gesture of humility and excuse that she dares to quietly but sustainably counteract the violence of habits and to take in her own way what is due to a human being: the right to knowledge. "

Her beloved brother Wilhelm died in 1822. Now nothing kept her in England. A few weeks after his death, Caroline Herschel moved back to her hometown Hanover, which she had left as a young woman almost fifty years earlier. Here she continued her astronomical studies. She organized the extensive material her brother had left by sorting the records of the joint observations by zenith distance and right ascension . In this way, she also made it possible for her nephew John Herschel to continue his father's work systematically and to expand it to the southern starry sky. 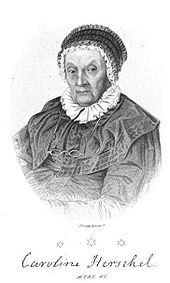 Caroline Herschel at the age of 92

The most important scholars visited her in her simple house on Marktstrasse to assure her of their favor and appreciation. She even had contact with the royal court. She has received numerous awards - including the gold medal of the Royal Astronomical Society in 1828 , of which she was made an honorary member in 1835. She was the first woman to receive such recognition. The reason for this was her so-called zone catalog , which she had created in memory of her brother. It contained the reduced observations of all nebulae and star clusters discovered by Wilhelm Herschel . In 1838 the Royal Irish Academy of Sciences in Dublin appointed 88 year old Caroline Herschel to its membership. In 1846, at the age of 96, she received the gold medal of the Prussian Academy of Sciences on behalf of the King of Prussia .

On her 97th birthday she was received by the Crown Prince couple, had a lively conversation with them for a few hours and then sang a song to them that her brother had composed seventy years earlier. Caroline Herschel died on January 9, 1848. She reached the old age of 97 and was buried in the garden cemetery in Hanover, where her grave is still located. 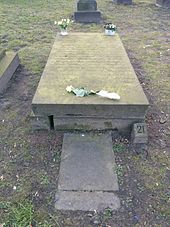 The comet 35P / Herschel-Rigollet was named after Caroline Herschel, as was the moon crater C. Herschel in the Sinus Iridum (rainbow bay) and the planetoid (281) Lucretia .

There are streets in Bonn , Braunschweig , Bremen , Darmstadt , Lübeck, Munich , Ottobrunn , Peine and Wennigsen , in Berlin-Friedrichshain the Caroline-Herschel-Platz is named after her.

It also found its way into the visual arts of the 20th century. The feminist artist Judy Chicago dedicated one of the 39 place settings at the table to her in her work The Dinner Party .

Sir John Franklin named an island in the Northwest Passage after the Herschel siblings.