As a mist ( ahd. Nebul on Latin nebula of Greek νεφέλη nephele or νέφος nephos , cloud ') or nebulae were in the astronomy originally all bright-dimensional objects on the celestial sphere , respectively. This also includes star nebulae , i.e. galaxies (spiral nebulae) and star clusters , since they appear as nebulae at low resolution in the telescope or with the naked eye. Some of the proper names of such objects have survived, e.g. B. the Andromeda Nebula M  31 or the Triangle Nebula M 33.

Today, however , the term cosmic nebula is used almost exclusively for interstellar clouds of dust and gas, which are divided into different categories depending on how they glow: gas nebulae , which emit or reflect light, and dark nebulae , which absorb light. For galaxies, on the other hand, which were previously known as spiral nebulae , this is no longer common.

The first systematic directory of foggy celestial objects is the Messier catalog drawn up by Charles Messier in 1774 . Another important directory is the New General Catalog (NGC) by Johan Ludvig Emil Dreyer (1888). In addition to gas and dust nebulae, both contain galaxies and star clusters and are still used today.

In astronomy , the sun nebula is also referred to as nebula , the gas cloud from which our solar system is believed to have formed. In contrast, the star clusters are no longer referred to as nebulae, even if they appear as such in small telescopes. The term " fog flight", which describes the increasing flight movement of galaxies (which were formerly known as "fog"), is outdated . 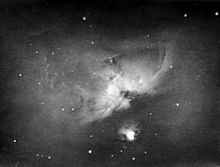 Above photo with the visually visible contours ( eight-inch , outskirts)

The fog objects can only be visually observed to a limited extent because the surface brightness is often too low for our eyes. The method of indirect vision is helpful here , in which one does not fix the object directly, but just looks past it.

The astrophotography , however, can also represent very faint mist because the photographic plate or CCD sensor can be exposed long very much.

Since only the best photos taken by large telescopes can be seen in books and illustrated books today , the two images on the right show the difference between photographic and visual observation. The photo from 1883 was made on a medium-sized instrument. With an even larger aperture and compared to a color image , the difference would be even greater.

On the history of fog photography

The development of photography began in 1838 by Louis Daguerre , but was initially limited to light objects. The first image of a bright star was taken at Harvard Observatory in 1850 with an exposure time of 100 seconds - the chemistry of the photographic emulsion and the tracking of the telescope were not enough for more.

In the following decades, the young astrophotography was used for binary stars, planets and spectrography , but the first image of a gas nebula - the well-known Orion Nebula M42 - was not made until 1880 by the US astronomer Henry Draper on a new kind of bromide silver emulsion; The surface brightness of less bright objects was still too low. Four years later, the Andromeda “nebula” was also successfully photographed, which later turned out not to be a nebula but a galaxy .

The most important advances in fog photography were made by Max Wolf at the Heidelberg-Königstuhl State Observatory, which he founded, and Edward Barnard at the Mount Wilson Observatory in California. Wolf discovered numerous light and dark nebulae in the summer Milky Way , the exact structure of which was researched by Barnard in 1905 using 480 precisely tracked photos. Around 100 dark nebulae he discovered were named after Barnard , such as Barnard 68 .

From the 1920s onwards , progress was due on the one hand

In the 1930s, the first illustrated books with black and white photographs of many gas nebulae and galaxies were printed. B. by Robert Henseling The newly discovered sky (Berlin 1935–1939). After the Second World War , color photography became the standard in astronomy as well - not "directly", however, but by superimposing mostly three filter images in different colors. This technique was u. a. Perfected by the Hubble Space Telescope . One of the best-known terrestrial astrophotographers today is the Anglo-Australian scientist David Malin , whose popular illustrated books are now sold in the millions and have brought many amateurs to celestial studies - who in turn are further developing various techniques of astrophotography.

Since the 1990s, the development and refinement of CCD sensors has meant that traditional photo plates have become much less important and most specialist companies have stopped their production. Meanwhile, the development of photographic CMOS technology has also become essential .