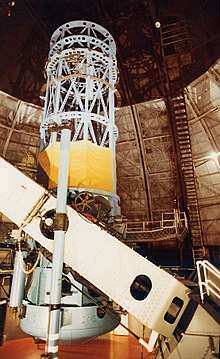 The Mount Wilson Observatory is over 100 years old and is one of the oldest and most successful observatories on earth. It is located on Mount Wilson at an altitude of 1,742  m in the San Gabriel Mountains in the US state of California , northeast of Los Angeles .

With the 2.5-meter mirror installed in 1917, it had the largest reflecting telescope in the world for 30 years . His most important contribution to research was the proof that the galaxies are islands of the world like our Milky Way and that the entire universe is expanding .

The observatory was founded in December 1904 by George Ellery Hale . It was originally planned as a scientific project by the Carnegie Institution of Washington . Hale brought the Snow Solar Telescope from the Yerkes Observatory in southern Wisconsin to the sunnier and more stable weather conditions of Mount Wilson to continue his studies in the sun .

Hale began with a small group of Yerkes scientists and engineers who accompanied him. In the following years the observatory would become one of the leading astronomical research institutions on earth. During the first half of the 20th century, the observatory was consecutively the site of the two largest telescopes on earth, as well as two of the most powerful facilities for studying the sun. Through the 1.54-meter (60-inch) and 2.54-meter (100-inch) telescopes (the latter also known as the Hooker reflector) for observing the night sky, as well as the 18.3 and 45.7 meter high solar tower telescopes various discoveries and evidence were made:

Star interferometry , which Albert A. Michelson used to measure the diameter of red giants around 1920, was also developed at the observatory .

The 2.54-meter (100-inch) telescope, which had been on Mount Wilson since 1917, was decommissioned from 1985 to 1992. The reasons for this were a financial budget that was too small and the consideration to simplify operation through technical innovations. For the even larger 200-inch telescope planned by Hale from 1928, a more distant location on Mount Palomar was determined because of the light pollution on Mount Wilson, which was already annoying at that time .

The observatory can be visited all year round, depending on the weather.