Eugene and Carolyn Shoemaker at the 46 cm Schmidt telescope

The Palomar Observatory is a large observatory in the USA, which is best known for the 5-meter mirror telescope , the Hale telescope . This was the largest telescope in the world for about 30 years.

It is located on the summit of 1706-meter-high Palomar Mountain about 80 kilometers northeast of San Diego . Today the observatory is part of Caltech , the California Institute of Technology.

The mountain Palomar Mountain is often referred to as Mount Palomar in German usage.

The 5 meter mirror on Mount Palomar

The largest telescope at the Palomar Observatory is the Hale Telescope, which was also the largest telescope in the world from 1947 to 1975. It is a reflecting telescope and has a primary mirror with a diameter of 5.08 meters (200 inches ). It was named in honor of George Ellery Hale, who died in 1938 . With funds from the Carnegie Institution for Science, Hale had initiated the construction of the 60- and 100-inch telescopes on Mount Wilson , which were completed in 1908 and 1917, respectively. With these telescopes, Harlow Shapley confirmed the previously controversial existence of distant galaxies outside our Milky Way, and Edwin Hubble found the first indications of the expansion of our universe. In 1928, Hale convinced the President of the Rockefeller Foundation to build an even larger 200-inch mirror telescope, the location of which fell on Mount Palomar, 192 kilometers from Pasadena , because of the increasing " light pollution " in Los Angeles in the 1930s . The direction was given to Caltech in Pasadena and not like the Mt. Wilson Observatories of the Carnegie Institution .

The construction of the telescope took over 15 years. The raw mirror was manufactured in the Corning glass works in New York from Pyrex glass, which is less sensitive to changes in length due to temperature changes. Just for careful cooling after casting , it took eight months. The housing of the secondary mirror is so large that the astronomer can sit in it for special tasks when measuring and adjusting . The telescope, which weighs more than 400 tons in total, is housed in a 1000-ton dome, 42 meters in diameter and 41 meters high, which was completed in 1936. The raw mirror was transported to Pasadena in 1936, where it was ground to a paraboloid shape in the Caltech optical laboratories from 1936 to 1947, interrupted by the war years. A separate vehicle and road were built to transport the 20- ton, 5-meter mirror from Pasadena to Palomar, which took place on November 12, 1947. The telescope was inaugurated on June 3, 1948, but did not see “ First Light ” until January 1949 (under Hubble himself).

In late 1949, astronomers from Caltech and the Carnegie Institution opened full-time operations . 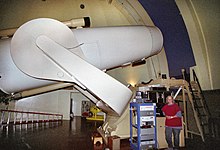 The famous Oschin-Schmidt telescope (also called Big-Schmidt , named after Samuel Oschin in 1987) with 122 cm opening (48 inches) and 183 cm mirror diameter, the field of view is 36 square degrees, is also located at the Palomar observatory . This Schmidt telescope was used to record the Palomar Observatory Sky Survey in the 1950s (another digital survey was carried out from 1985). To this day it is a first-class find source for distant galaxies or when looking for the predecessor star of a nova or supernova in a "closer" galaxy. Newly discovered asteroids are also often found on archived photo plates of the Oschin-Schmidt telescope, which were taken years or decades earlier, which enables much more precise orbit determinations . The telescope was put into operation in 1948 ("First Light"). The telescope was used with another 18-inch Schmidt telescope (in operation from 1936) to search areas of the sky for interesting target objects for the large 200-inch telescope of the Palomar.

In 2003 the Oschin Schmidt telescope was equipped with the so-called QUEST camera, which is composed of a total of 112 CCD chips and has a resolution of 161 megapixels . With this instrument, among other things, the discovery of the dwarf planet Eris succeeded .

The Palomar Testbed Interferometer on the summit of Palomar Mountain, adjacent to the white dome of the 200-inch Hale telescope

The Palomar Testbed Interferometer is an astronomical interferometer for observation in the near infrared spectral range. It serves as a test facility for the development of interferometric observation techniques that will later be used at the Keck Observatory . The first investigations began in 1995, the full scientific operation started in 1998. a. high-precision astrometry as well as determination of the mass, shape and diameter of stars. For example, it was possible to show that the star Altair is flattened at the poles due to its high rotation rate. The high precision was achieved through a dual star system, with which two stars can be observed. This makes it possible to eliminate atmospheric influences, i.e. seeing .