This article is about the star Altair. For additional meanings, see Altair (disambiguation) .
Database links to Altair (Alpha Aquilae)

Altair [al'ta: ir] (also called Atair ) is the brightest star in the constellation Aquila (eagle) and the twelfth brightest star in the night sky, Bayer classification α Aquilae. Together with the stars Wega and Deneb , Altair forms the summer triangle . Altair, like the sun , is currently in the local flake . At a distance of 16.73 light years , it is one of the closest stars to the Sun among the stars visible to the naked eye.

Altair is the brightest star in the constellation Aquila

The Arabs translated the Ptolemaic paraphrases in the 8th and 9th centuries . The new names are therefore a mixture of old Arabic - mythological and Greek names. The Arabic name Altair is a short form of the original name (النسر الطائر / an-Nasr aṭ-Ṭāʾir  / 'the flying eagle'), where aṭ-Ṭāʾir refers to the meanings "the flying one" and "the fugitive".

The single use of the word aṭ-Ṭāʾir for “bird”, which can also be used as a synonym, includes all flight characteristics associated with it, but cannot be transferred anachronistically to the earlier name “literally”.

The astronomical name Alpha Aquilae therefore has its roots in the Arabic an-Nasr ("the eagle").

Altair is a main row dwarf 1.7 times the diameter and 11 times the luminosity of the sun. With a surface temperature of around 7,800 Kelvin , Altair is an average hot star. Due to its proper motion of one degree in 5,000 years, Altair is one of the faster stars in the sky. Its radial speed is −27 km / s. 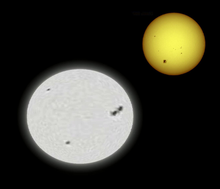 Size comparison between Altair (left) and the sun 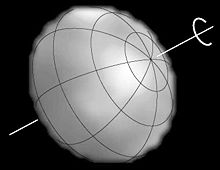 By measuring the width of its spectral lines, it was discovered that Altair rotates very quickly on its own axis and is therefore severely flattened. The duration of a full turn at the equator was determined to be 6.5 hours (other sources give 9 or 10.4 hours). In comparison, the sun takes about 25 days to complete a full turn. This makes Altair's rotation one of the shortest of all known stars. Altair is still far from breaking apart due to its rotational speed. This limit would probably be exceeded at 450 km / s, with one rotation in 6 hours a point on the equator moves at around 200 km / s.

Altair is one of the brightest stars among the so-called Delta Scuti variable stars . With an amplitude of a few thousandths of a magnitude, its brightness fluctuates between 50 minutes and 9 hours with 9 different periods.

Although Altair is only a few hundred million years old, its hydrogen supply will only last about a billion years before it evolves into a red giant or mutable Cepheid before shedding its outer layers and ending up as a white dwarf . 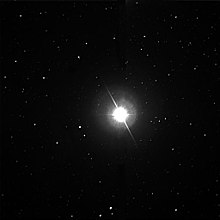 In the summer of 2007, scientists in the USA succeeded in using Altair to directly observe the surface of a distant, sun-like star. Four telescopes of the CHARA array were connected to an infrared interferometer via glass fibers. The aperture equivalent of the four telescopes in this case corresponded to that of a telescope measuring 265 meters × 195 meters. With the CHARA interferometry it was found that Altair's equatorial diameter is 22 percent larger than the pole diameter.

Furthermore, the first visible evidence of “gravity darkening” was provided. The effect manifests itself as a dark band around the equator of the star, which results from the fact that the gas in the equatorial regions is less dense in rapidly rotating stars and therefore radiates relatively weaker.

In the Chinese love story of the cowherd and the weaver , which is celebrated annually in China as Qixi and in Japan as Tanabata , Altair is the “star of the cowherd” ( Chinese  牛郎星 , Pinyin Níulang Xīng , Chinese  牽牛星  /  牵牛星 , Pinyin Qiānníu Xīng , Japanese kengyūsei or 彦 星 , Hiko-boshi ), who is separated from the weaver ( Wega ) by the “sky river” (Milky Way) .

Altair plays a role in numerous fictions, for example in the television series Star Trek and Stargate or in the computer game Master of Orion .

In the space simulation Elite , one of its planets is a human-inhabited colony in the 8th galaxy, and in the sequel Frontier: Elite 2 it is home to a solar system with two Earth-like planets, two " gas giants " and one " supergiant ". "Under the Rays of Altair" is an SF novel by the British author Edmund Cooper from 1968. The appearance of Altair in the television series Starship Enterprise is the namesake for the Altair 8800 home computer . In the video game Assassin's Creed , the main character is called "Altaïr Ibn-La'Ahad". In the science fiction series Battlestar Galactica , "Altaïr" is the name of a civilian spaceship and in the novel series The Hitchhiker's Guide to the Galaxy there is the currency unit "Altair dollar".

The PC video game "Crystal Caves" published by Apogee in 1991 is also set in the Altair system.

In Stephen King's novel “ Das Monstrum - Tommyknockers ” the young David Brown is teleported to a distant place in the universe called “Altair-4”, which is described as icy cold and hostile to life.