Elite is a 1984 published science fiction - video game of Ian Bell and David Braben , the economic simulation and an armed space flight simulator game combines. With its game world spanning more than a thousand planets and the absence of a clearly defined end of the game, Elite is considered an early representative of an open world game . The real-time calculated cockpit view of space with polygon spaceships was at the limit of the computing power of home computers at the time.

Due to its popularity, the game originally released for the BBC Micro was ported to many other systems and remained popular until the 1990s. The game principle has been copied and further developed in third-party productions and official follow-up games . 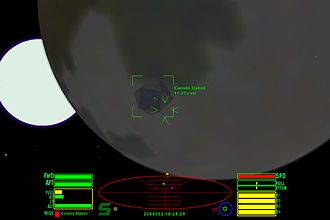 Screenshot of Oolite , an elite clone with higher resolution graphics and textures

At Elite , the player leads Commander Jameson , who starts the game with a tight starting capital of 100 credits and a small spaceship, a Cobra Mark III . At first you can practically only trade with the spaceship and buy additional equipment from the proceeds. With better equipment or armament, you can also mine metals on asteroids, hunt pirates or work as such yourself and complete some special missions (depending on the version). As the game progresses you go through different ranks; the goal is to achieve the elite combat rating.

The original version of Elite was developed by Ian Bell and David Braben for the BBC Micro home computer, which was popular in Great Britain at the time . Elite itself was influenced by the pen and paper role-playing game Traveler and adopted many elements - such as the classification of star systems and even the shape of some spaceships - from this model.

Elite was one of the first computer games that allowed gamers to move freely in a 3D environment. As a science fiction game, Elite appealed to technology-loving gamers with a very progressive display that exceeded the state of the art in many ways.

In November 1999, on the 15th anniversary of the game, Ian Bell published binary versions and source code of many versions of the game for free download on his website. Subsequently, in the years 1999-2000 there was a dispute between Ian Bell and David Braben over Bell's decision to make these versions of the original game available. The dispute was later settled and these versions are back on Bell's website.

Elite is a space simulation with 3D vector graphics that do not show hidden lines in order to give the impression of solid bodies. Compared to the wire-frame models common in contemporary home computers , this was a significant advance in the quality of the spatial illusion. This progress was made possible by the consistent use of the convex bodies, which are particularly easy to calculate. In later portings , polygon graphics with filled areas were sometimes used , benefiting from the higher computing power .

In addition to the new graphic display, this also included details such as a 3D radar screen, which takes up the display method of modern collision avoidance radars used in aviation . This system enables the exact position determination of objects in a spherical space.

Despite the low storage capacity of the home computer , the Elite playing field consisted of approx. 2,000 star systems on eight cards (" galaxies "), which could be represented by a clever use of a pseudo-random number generator with fixed starting values ​​with minimal memory expenditure. This method of representing star systems also has similarities to the role-playing game Traveler .

Elite was also the most famous game in which the lenslok - copy protection system was used.

As a science fiction game, Elite quotes various science fiction works: In the version for the Commodore 64, the player's spaceship is overrun in a sequence by actually harmless but rapidly multiplying beings - an allusion to the tribbles from the TV series Star Trek . The space stations , to which the player has to dock regularly, play an important role . There are two types of space stations, the Coriolis station, which is mainly found on industrial planets and is represented as a cube with flattened corners, and the dodo station on agricultural planets, which forms a dodecahedron . As in the story 2001: A Space Odyssey by Arthur C. Clarke, filmed by Stanley Kubrick , these space stations rotate around their own axis in order to simulate terrestrial gravity inside through centrifugal force, which makes docking a playful challenge. If you can call a landing computer your own later in the game, you will be entertained with the Blue Danube Waltz played in the game and in the film during the docking sequence .

Elite was a great success with the public and the trade press, for example it was presented in 1990 by Power-Play magazine in the category The 100 Best Games .

The games Wing Commander: Privateer , Privateer 2 , Freelancer and Darkstar One as well as the X series are based on the game principle of Elite . Jumpgate , Vendetta Online and EVE Online offer a comparable game principle in the form of massively multiplayer online role-playing games . For Palm - PDAs is available with Space Trader reduced to the strategy elements version.

The successors under the titles Frontier: Elite II and Frontier: First Encounters offered further developments in terms of content (realistic flight physics, astronomically largely correct simulation of the Milky Way), but could not build on the first success in commercial terms.

Many attempts have been made to create worthy clones of Elite . While most projects ended unfinished, the open source clone Oolite is a successful exception. Elite: The New Kind was developed by Christian Pinder via reverse engineering from the original BBC micro version and ported for many platforms. However, further distribution was stopped after one of the original authors, David Braben, requested it. In September 2014, on Elite's 30th birthday, Ian Bell republished Elite: The New Kind on its website. Since then, it has also been available again on Christian Pinder's website. In the late 1980s, an unofficial variant of the BBC Micro Elite commercial was also created by Angus Duggan, disassembling and modifying the 6502 code. Equipped with many new features and called Elite III , it was soon renamed Elite A to avoid confusion. Elite A was officially released in 1997. This version is also made available by Ian Bell on his website.

Under the name Elite: Dangerous , David Brabens company Frontier Developments announced a multiplayer and network- compatible successor with contemporary graphics in 2012, which is based on the game principle of the original Elite . The project was financed through the crowdfunding platform Kickstarter.com and published on December 16, 2014. At the end of 2015, the Horizons expansion came, which made it possible to land on planets and drive around in a vehicle. The game is also available as a virtual reality version for the Oculus Rift VR glasses.