During his military service in World War II , he gained acting experience. He was a graduate of Balliol College .

He first worked for television, where he received the Golden Lion and a BAFTA in the category of best short film for the documentary Terminus in 1961 . His film debut Just a Touch of Bliss won him the Golden Bear at the 1962 Berlinale in 1962 . After the Thomas Hardy adaptation Die Herrin von Thornhill (1967) he moved to the USA. From then on he worked alternately in the USA and England. In 1969, he received the British Film Awards, an Oscar and a Directors Guild of America Award for best director of the year . In 1970 he was appointed Commander of the British Empire .

John Schlesinger lived with his partner, photographer Michael Childers , in Palm Springs, where he also died.

He is the uncle of Ian Buruma , who in 2016 wrote a research about his grandparents Bernard Schlesinger and Winifred Regensburg and their assimilation history in England. 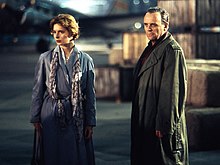