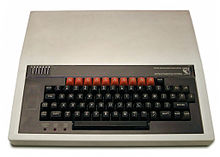 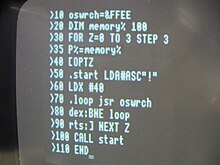 Screen of the BBC Micro with a BASIC - listing , which is also inline assembly includes parts by 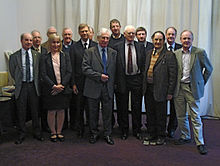 The BBC Micro (Acorn BBC Microcomputer) is a home computer based on the 6502 processor (2 MHz) from the British company Acorn .

From 1981 onwards, it was mainly used in British schools because a BBC broadcast used the Acorn as a teaching model. Hence the frequently used name “BBC Micro” for the Acorn A (16 kB RAM), B (32 kB RAM) and B + (64 kB RAM) models. The BBC Micro had a total of seven revisions, but revisions 6 and 7 were not published.

The Acorn's open system bus - the "Tube" - was unique for the time . Additional CPU modules can also be connected to the otherwise independently operating computer . Processors of type 6502, Z80 , and ARM 1 were possible, which degraded the computer to a console, but also allowed the use of other operating systems ( CP / M , Unix ).

Rear of the BBC Micro. Outputs from left to right: UHF Out, Video Out, RGB, RS423 , Cassette, Analog In and Econet .

Internally, the Acorn already had a powerful BASIC in its ROM with BBC BASIC . It offered a graphic resolution of up to 640 × 256, 4-channel sound output, digital-to-analog converter and various external interfaces (parallel, serial, monitor, TV, user port).

Because of the relatively high price, the Micro was never able to establish itself internationally, which is why a cheaper version of the Micro was later released with the Acorn Electron . The successor to the Micro was the BBC Master .

In the early 1980s, the British television broadcaster BBC launched the BBC Computer Literacy Project . The project came about primarily in response to the then very influential television documentary The Mighty Micro , in which Dr. Christopher Evans of the National Physical Laboratory describes the upcoming microcomputer revolution and the resulting effects on the economy, industry and society in England.

The BBC needed a microcomputer for the project that was able to perform certain tasks that they wanted to teach viewers on the TV series The Computer Program in 1982. The list of requirements included computer programming, computer graphics, sounds and music, teletext , control of external hardware and artificial intelligence . For this purpose, a specification was written and discussed with several computer manufacturers. These included Sinclair Research , Newbury Laboratories, Tangerine Computer Systems, Dragon Data, and Acorn Computers.

At that time the Acorn team was already working on the successor to the Acorn Atom computer. However, the device was still in the early development phase, and the team ( Steve Furber and Sophie Wilson were also there ) had only four days to turn it into a working prototype according to the specifications of the BBC. In the end, Acorn was successful with its computer: Not only was the Acorn computer the only one that met the specifications of the BBC, but it exceeded the requirements in almost every area.

The BBC Micro in the music industry

A film was made in 2009 about the creation of the BBC Micro: "Micro Men", which describes the competition between the companies Acorn and Sinclair Research to produce the computer for the BBC. The name of the miniature computer BBC micro: bit presented by the BBC in 2015 refers to the BBC Micro.