The computer chip MOS Technology 6502 is an 8- bit - microprocessor from MOS Technology, Inc. , which in 1975 came on the market. Due to its simplicity and, above all, its very low price compared to the then established Intel and Motorola processors with high performance, it was used in many home computers (e.g. the Commodore VC-20 and its predecessor PET 2001 , the Atari 800 , Apple I , Apple II and BBC Micro ), numerous chess computers (e.g. the Mephisto Polgar with 5 or 10 MHz), used in the world's first skat computer Skat Champion and many peripheral devices. The processor was developed under the direction of Chuck Peddle .

Other members of this processor family were also very successful, such as the 6510 , part of the Commodore 64 , and the 6507 in the Atari game consoles. The main competitor at the time was the Zilog Z80 . B. in the Sinclair and Schneider computers as well as in many CP / M computers.

The design of the 6502 was based on that of the Motorola 6800 (not to be confused with the younger Motorola 68000 ). The instruction set is similar, but instead of a 16-bit index register , two 8-bit index registers are used, the value of which is added to a 16-bit address specified in the memory (also in the program code). That's why 6502 programs have a different style: For arrays that are larger than 256 bytes, additional programming effort must be made. On the other hand, manipulating 8-bit values ​​on an 8-bit microprocessor is much faster.

Unlike the 16-bit registers of the 6800 or the Z80, which represent an absolute address, the 8-bit registers of the 6502 only represent an array index (in the narrow range of values ​​from 0 to 255), and in some cases a single 8-bit increment or decrement command both counting the addresses and setting the condition for the loop abort at index = 0, which leads to compact and fast loops. However, the simpler set of instructions means that 6502 programs normally require significantly more memory than the same 6800 or Z80 programs; In addition, standards-compliant compilers for higher programming languages ​​such as Pascal or C are much more difficult to implement on the 6502 and generate slower code than on other 8-bit processors. The main reason for this is the size of the hardware stack memory (see below) in the 6502, which is limited to 256 bytes, so that the large stack memory required for most modern high-level languages ​​has to be simulated by software. In order to keep the chip area small, the 6502 has only one battery in contrast to the two batteries A and B in the 6800.

The 64 KB address space of the 6502 is divided into several areas, which are mainly based on the page limits , where the high byte of the 16-bit address changes its value:

Introductory advertisement for the MCS6501 and MCS6502 microprocessors

Technically, the 6502 was quite innovative:

The cc65 is often used as a cross compiler . 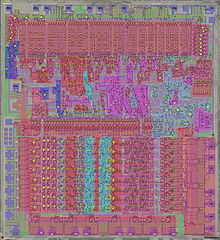 Chip of the MOS 6502 with drawn circuit diagram

* Note: The break flag only exists on the stack after a BRK command, not in the processor itself. It has no set and test commands of its own and is also not processed by the PLP and PHP commands.

Examples of machine commands or their opcode and mnemonics in connection with different types of addressing.

In assembler program texts of the 6502, the dollar and number signs as well as the brackets have the following meaning:

There are CMOS versions of the 6502 from different manufacturers that have an extended command set or other addressing types. These changes are likely to result in serious changes to the undocumented opcodes discussed below.

The 6502 is known for a number of commands that are not in the official documentation, but still exist and work. Colloquially, such commands were called “illegal opcodes”. Of the 256 possible opcodes , only 151 are actual commands. Of the remaining 105 undocumented codes, there are many that have functionality, and quite useful ones. Some assemblers support such commands, but there is no standard specification for naming them with mnemonics.

Data processing can be accelerated with a large number of undocumented opcodes, since they perform functions in just a few clock cycles that are otherwise only possible with several consecutive commands, which in total consumes considerably more clock cycles. However, this harbors the risk that such commands will not work equally on all CPUs produced or that a possible successor model will not be able to handle these commands at all. As a result, the program would no longer fulfill its function correctly or not at all.

Other unofficial functions of the 6502 are (mnemonics only unofficial):

Clock variants of the MOS 6502