A calculator is a portable, handy electronic calculating machine , with the aid of numerical calculations can be performed. Some recent technical and scientific calculator also dominate symbolic mathematics using a computer algebra system (CAS), so they can about equations change or dissolve.

Virtually all of today's calculator use electronic integrated circuits and LC displays as a display and a battery or solar cell with power supplied.

1972 Casio Mini, one of the first affordable consumer calculators 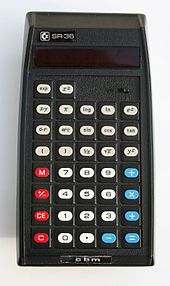 Even before the introduction of electronic pocket calculators, there was a need for portable computing aids. This was satisfied with mechanical pocket calculators and slide rules. Most of them were simple adding machines. Four-species machines - that is, calculating machines that could add, subtract, multiply and divide - were available in pocket-sized sizes. The best known example is the Curta .

The forerunners of the electronic pocket calculator were electronic desk calculators , in which the degree of integration of the circuit technology was even lower and therefore had larger dimensions.

The first electronic, actually palm-sized pocket calculator was developed by Texas Instruments in 1967 , with a patent from Jack Kilby representing the design extensively. A 1.5 kg prototype of this first pocket calculator is on display at the Smithsonian Institution today . This also ran on batteries; earlier computers needed a power connection. The first commercially sold pocket calculators were manufactured in 1969 and 1970 by the Californian company Compucorp , as well as the Japanese companies Sanyo , Sharp and Canon . Intel developed one of the first microprocessors for the Japanese company Busicom , the Intel 4004 , which came on the market in 1971 and was used in the Busicom 141-PF model. The Casio Mini , published in 1972, is considered to be the first pocket calculator that was affordable for the general public at a retail price of 10,000 yen . In 1972 Texas Instruments launched the SR 10 pocket calculator with its own TMS1000 microprocessor . These calculators did little more than the four basic arithmetic operations . In 1971 Bowmar produced the first pocket calculator available in the USA (Bowmar 901B / "Bowmar Brain", dimensions: 131 mm × 77 mm × 37 mm). It had four functions and an eight-digit red LED display. It was sold for US $ 240. Bowmar had to close in 1976.

In 1972, the HP-35 from Hewlett-Packard was the first technical and scientific pocket calculator with trigonometric , logarithmic and exponential calculation functions . It became a sales success and ushered in the end of the slide rule that was still widespread at the time. One of its developers was Steve Wozniak , who a few years later co-founded the Apple company and, as a computer engineer, significantly influenced the development of the personal computer .

In most pocket calculators, data is entered with your finger using small pushbuttons . The keyboard layout depends on the variant of the computer. Some devices are equipped with an alphanumeric keyboard. The following keys can be found on almost every calculator in the order shown:

Often there is Calso a CEkey next to the key : C lear E ntry; (only delete last entry).

Depending on the type of calculator, different entries are required to calculate the same function:

While operations with two operands (+, -, *, /) are entered, however they are written, and are only executed when you press "=", functions (one-digit operations) are executed immediately when you press the corresponding key, because there is no need to wait for a second operand. This means that you have to enter the argument before the function, e.g. B. 4 sin 30 ° is entered as 4 × 3 0 sin =.

The difference is important for teaching in schools, because there it regularly happens that key sequences are announced and several students are also typed. If the students have computers with different input logic, misunderstandings arise.

With this input logic, the operator is always entered after the operands. Occasionally the ENTER key must be used to separate operands. Computers of this type can usually be recognized by the ENTER key, while the "=" key is missing
3 ENTER 8 × 2 +, unusual but possible 2 ENTER 3 ENTER 8 × +.

Some pocket calculators like the HP-49G + and the HP 35s can also be switched between the reverse Polish notation and the algebraic notation.

More and more newer models like Casio fx-991ES or TI-30X Plus MultiView also have a two-dimensional input editor like the HP-48, which was built in 1989 . This means that the input and typically also the output takes place as you write or print.

Most current models contain several of the above function groups, in some cases even with a simple spreadsheet .

Even if today's pocket calculators usually have hardly any program errors in simple calculations, different accuracies and resolutions can be determined for numerical calculations between different pocket calculator models. The reasons are the numerical approximation methods (for example Horner's scheme and CORDIC ), with which, for example, transcendent functions such as the sine function are calculated. More precisely, it depends on the number of stored coefficients for the function approximations: the memory space required for this was an extreme bottleneck, especially in the early days. These small differences in the procedures and different levels of accuracy can also be used as identifiers for a specific firmware .

For example, the numerical calculation of sin (22) in radians on different pocket calculators gives the following results that differ from one another:

the result is 0 instead of the correct 0.1. Similarly, on a scientific pocket calculator with a 12-digit mantissa, entering

to the wrong result 0 (instead of correct ), because the mean summand is smaller than the machine accuracy.

Both examples also show that laws of mathematics such as the commutative law are generally no longer valid on pocket calculators; If you swap the second with the third addend when entering the data, the calculations are correct in both cases.

Especially when performing calculations one after the other, the errors can accumulate to a completely unusable end result .

Various abbreviations for the respective device classes have emerged in schools:

With a resolution dated October 18, 2012, the Standing Conference (KMK) introduced educational standards for the general higher education entrance qualification in various subjects, including mathematics, thereby replacing the uniform examination requirements for the Abitur examination (EPA) for these subjects. The Institute for Quality Development in Education (IQB) is putting together a pool of tasks on behalf of the Conference of Ministers of Education , from which future Abitur exams are to be fed. In this context, requirements for the use of digital tools were defined. A “simple scientific pocket calculator” or a computer algebra system (CAS) are permitted as digital aids. For each of the two digital tools it is assumed that it does not allow access to networks of any kind when used.

The information on the “simple scientific pocket calculator” corresponds to the requirements of the federal states of Baden-Württemberg and Bavaria. The use of programmable pocket calculators is not intended. A calculator is considered to be programmable if additional routines can be stored that are not part of the original functionality. With the exception of Bavaria and Baden-Württemberg as well as Berlin and Brandenburg, the current examination conditions of the other federal states allow scientific pocket calculators that contradict the IQB's requirements in all points, unless GTR or CAS are required as digital aids in the Abitur examination.

In the case of computer algebra systems, it is assumed that the CAS has typical functions such as the algebraic solving of equations and systems of equations, differentiation and integration, calculation with vectors and matrices and the like. It is also assumed that the CAS is put into a state before it can be used in the exam in which access to files and programs that are not part of the scope of delivery or a system update is prevented.

The following table was developed on the basis of the information provided by the education ministries of the federal states. If these could not be found, the information from the various pocket calculator manufacturers was used. It reflects the conditions at grammar schools with regard to admission to examinations, since use in the classroom is possible anywhere due to the educational freedom of the teacher.

Until the introduction of the central matriculation examination in the middle of the 2010s, there were no nationwide uniform regulations for the admission of certain aids for the Matura, as the Matura itself was drawn up decentrally, i.e. by the teachers on site. The decision as to whether a certain aid was approved or not was up to the respective teacher.

Since 2018, the minimum requirements for technical aids (such as pocket calculators; computers are also permitted) are as follows:

Calculator as a program

After pocket calculators had become a widespread tool in (professional) life, their functionality was simulated in computer programs . These soon became part of the basic equipment of operating systems , for example in personal computers and cell phones . There is also a large selection of programs that offer complex functionalities such as programmability or the conversion of physical quantities.