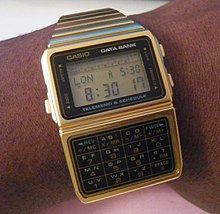 In order to be able to sell products outside of Japan, today's Casio Computer Co., Ltd. was established in 1957. With his three brothers Toshio (1925–2012), Kazuo (1929–2018) and Yukio (* 1930), Tadao Kashio from the small electronics company Kashio Seisakujo established the world-famous electronics group Casio . Each brother brought their unique specialty and strengths with them: Tadao in finance, Toshio in development, Kazuo in sales and Yukio in production. In 1957, the series production of calculating machines began . From 1965 the first electronic desktop calculators with memory were produced. In 1974 Casio launched its first digital wristwatch , the Casiotron . In 1984 the first Casio synthesizer was marketed, the CZ-101. Digital cameras have been sold since 1995 . In 1996 the company presented its first PDA with Microsoft Windows CE under the name Casio Cassiopeia . 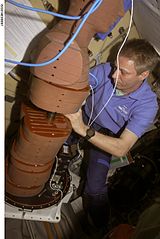 Casio was one of the first manufacturers of digital wristwatches and is known for building many functions into small wristwatches ( e.g. stopwatch , digital compass, altimeter and air pressure meter, thermometer, GPS , digital camera , remote control ). Casio has also been offering radio- controlled clocks and classically designed analog clocks worldwide since 2000 . In 2017, Casio announced in a press release that the one hundred millionth G-Shock wristwatch had been produced in August 2017. The company sees itself as the market leader for outdoor watches.

An early programmable calculator was the FX-201P, which was produced in 1976. Jump commands, loops and subroutines could be programmed. 1 / x and the root were calculated to 10, the other functions to 8 digits. Current scientific pocket calculators from Casio support spreadsheets, numerical solving of equations, prime factorization, matrix calculations and offer the possibility of further processing results online via QR code .